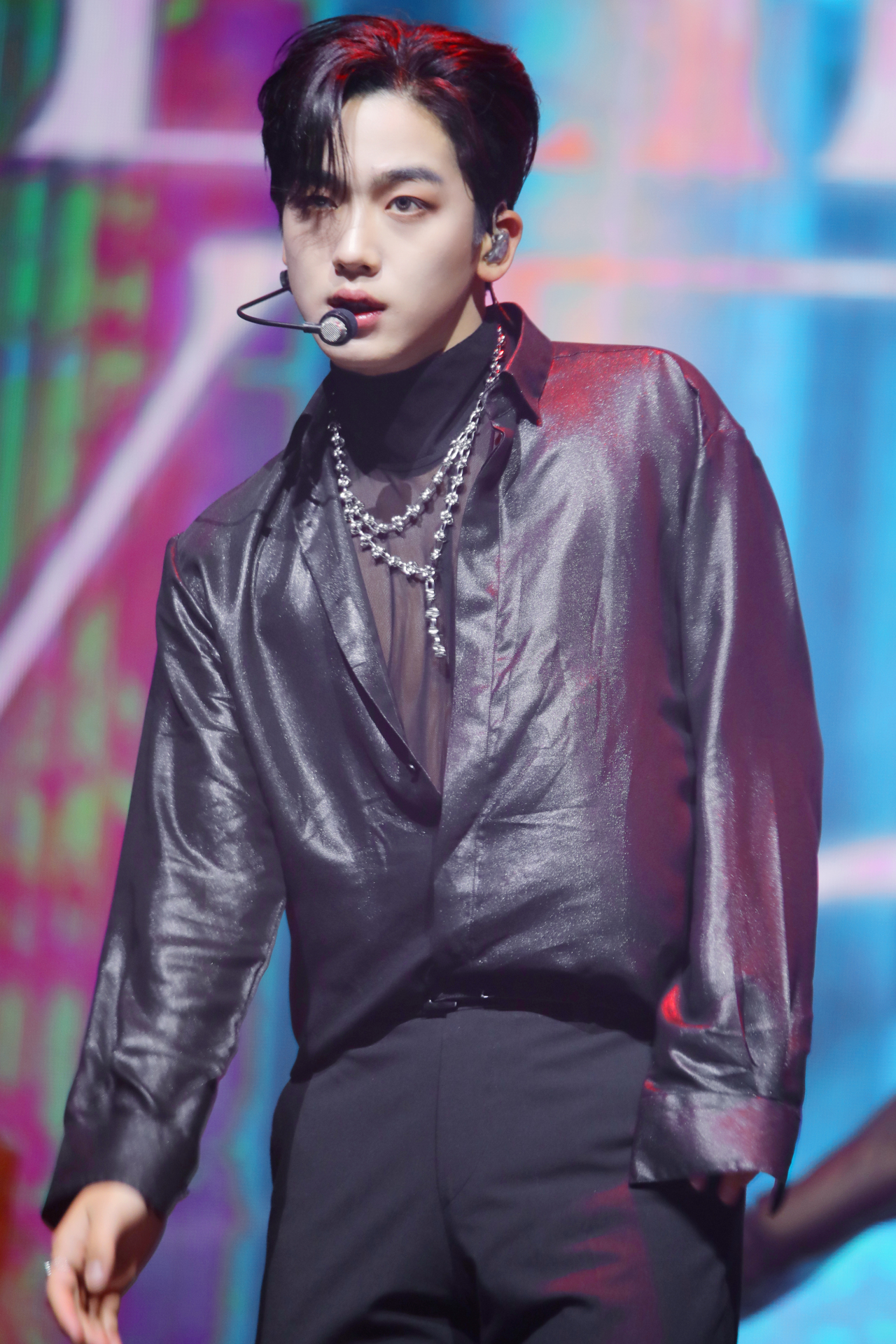 Singer-turned-soloist Kim Yo-han performs his new song “Dessert” during an online press conference Monday. (Oui Entertainment)
Kim Yo-han of boy band WEi welcomed the second week of the new year by hopping onto the September music chart craze with his mini-album “Illusion.” The album, which dropped Monday evening, touches on the different colors and melodies of music.

In a press conference on Monday, the singer said that as the name of his album suggests, the term “illusion” translates into a fantasy – a reverie that everyone dreams of. The musician added that he wanted the album to have an ethereal vibe, and spoke about why he decided to let his chicness and charisma take center stage.

The 22-year-old took a leap of faith this time by listing himself as a lyricist for three of his songs, including the main track.

Leading the album is the title track “Dessert,” which the singer-turned-soloist described as a “funky disco song interwoven with basslines that make the music sound more groovy.” The lyrics talk about gravitating toward your lover because of one‘s sweet charms, which is why the musician likened the titular to the confection. He went on to say that he wanted to express being dangerously in love with his lover’s attractiveness.
When asked about his inspiration, the soloist said the theme triggered his imagination. “I tried to meld my emotions and thoughts that I‘ll do whatever it takes for my lover, and how I go crazy because I love my lover too much,” he added.

Kim Yo-han added that the titular’s melody line and rhythmical beats perfectly match his vocals, making his song worth listening to.

He also wrote the rap lyrics for his other two sidetracks – “Landing On You” and “Selfish.” The singer said “Landing On You,” a track that talks about reveling in the sweet moments with one‘s significant other and how the excitement of spending the day with that person deepens. 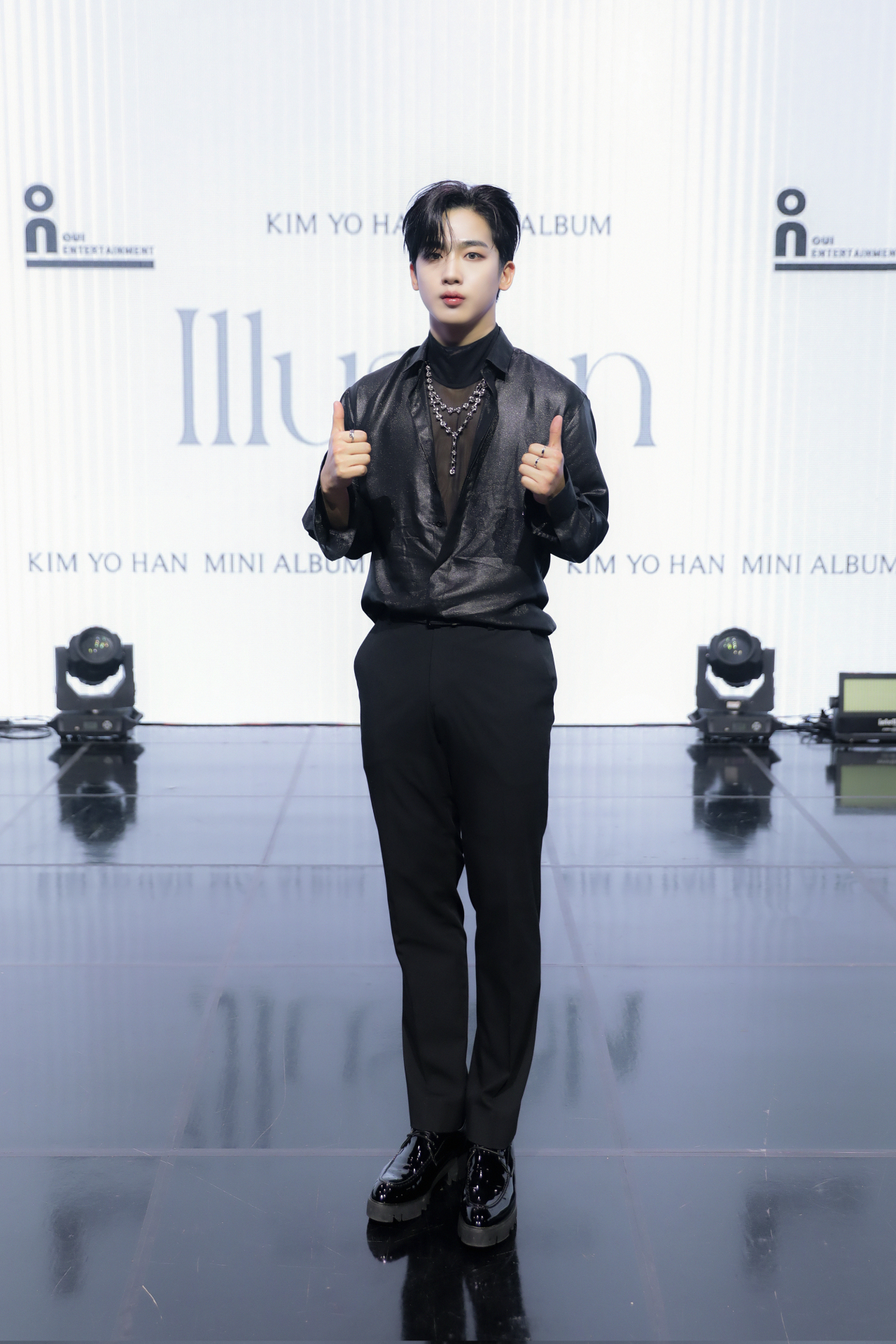 Singer-turned-soloist Kim Yo-han poses during an online press conference Monday. (Oui Entertainment)
The musician said “Selfish” conveyed the need to be more selfish and take care of oneself at times. He added that he wanted to say that sometimes it‘s crucial to put yourself before others.

The singer continued, describing that “Bad” is about how he can thrust himself into the darkness for his significant other. The five-track package also comprises “Star,” a song about his love toward his fandom and how thankful he is to have them around him.

“Illusion” is Kim Yo-han’s second solo, but the singer said preparing and working on his EP wasn‘t a walk in the park. He went on to say that he had a lot on his plate and had to do many things at the same time. “Not only was I working on my album, but I was also very busy shooting a drama,” he said.

“I wrote the words to ’Selfish‘ in between shootings. That’s how little time I had to prepare for my album,” the musician added, recalling his solo journey.

Kim Yo-han is widely known as a member of boy band WEi, but he has been expanding his presence as an actor. Before returning as a singer, the artist took the lead role in “School 2021” and notched the best new actor award at the 2021 KBS Drama Awards.

Kim Yo-han also spoke of his bandmates during the event when asked how they helped his solo journey. The rapper and vocalist said the road to releasing his first mini album was tough, but he showed appreciation toward his members. “All of the bandmates said the songs on my album were a bop,” the singer added.

Speaking about what he wants to show through his new album, the musician said he has set his heart on expanding his musical taste. “I wanted to show that ‘Kim Yo-han’ is a singer who could have other concepts and genres tailored to him,” he added.“

At the end of the press conference, the singer expressed hopes that his songs would land on many people‘s playlists. ”I hope more people become familiar with my name, ’Kim Yo-han‘, through this promotion,“ he added.

The five-song package was released at 6 p.m. on Monday.