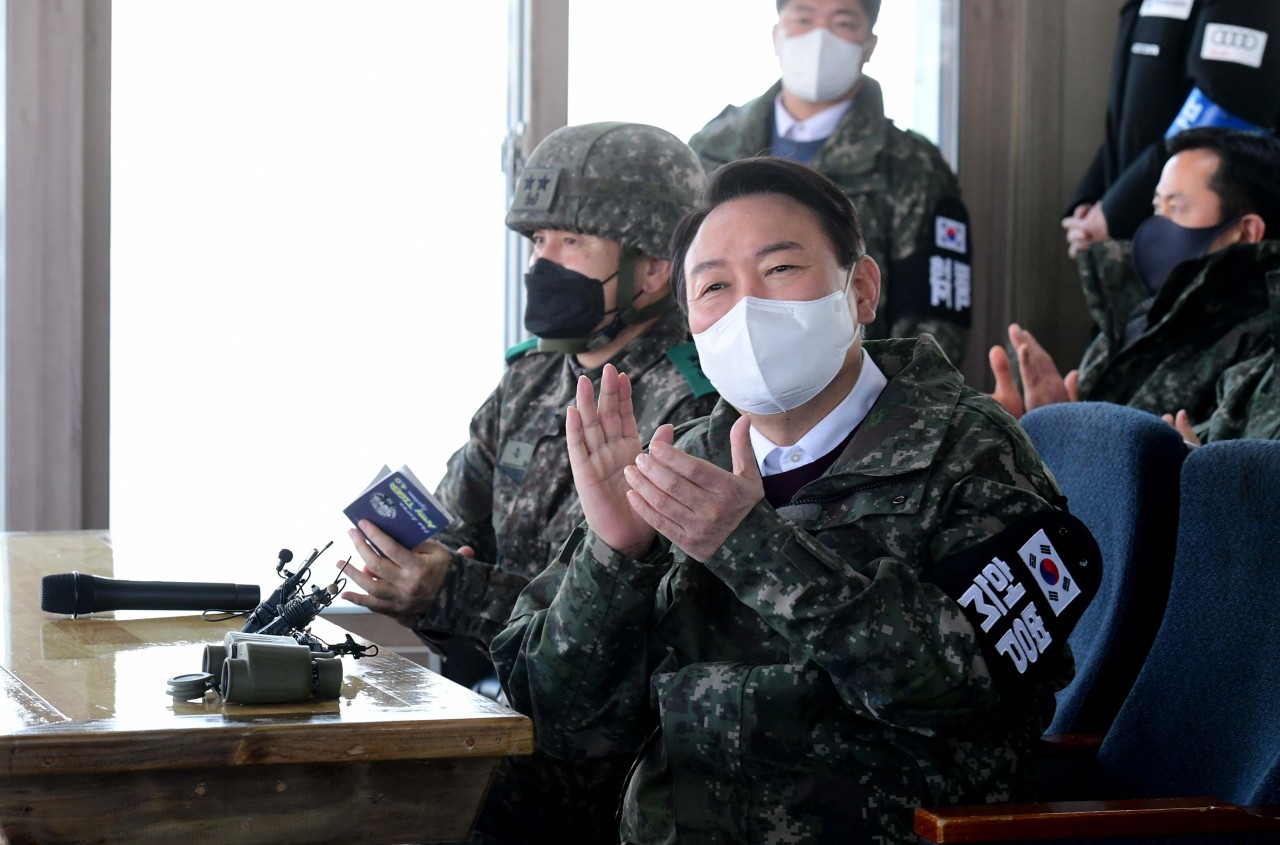 Yoon Suk-yeol, presidential nominee of the main opposition People Power Party, applauds after hearing a presentation from a military officer during a visit to the base of the 3rd Infantry Division in Gangwon Province last month. (Joint Press Corps)
Presidential nominee Yoon Suk-yeol of the main opposition People Power Party vowed to raise the wage of enlisted soldiers to 2 million won a month, following the vows of his rival Lee Jae-myung of the ruling Democratic Party made weeks earlier.

The campaign promise draws discussions on its administrative and financial feasibility, following calls from the past for the government to assure at least minimum wage for conscripts. The issue also extends to whether it can start bringing long-overdue reforms to the military.

Yoon said in a Facebook post Sunday that he will seek to drastically improve the wages and working conditions for conscripted soldiers in South Korea by raising their monthly salary from the current 676,100 won for sergeants to 2 million won during his term.

"Soldiers are providing their time and lives in fulfilling their duty to their country," Yoon said in the Facebook post.

"When individuals have no choice but to sacrifice for the sake of national security, it is the basic role of the state to properly design an appropriate compensatory measures for that sacrifice. Now is the time for the country to respond to the dedication of these young people."

Under the current conscription system, able-bodied South Korean men are required to complete mandatory military service for up to 21 months in the military, during which their ranks can rise from private second class to sergeant.

The Ministry of National Defense is on course to raise the monthly wage of these soldiers to up to 1 million won in 2026. The initiative came in place as part of Moon Jae-in administration’s goal to improve welfare for conscripted soldiers through increased pay and shortened service length.

Yoon’s campaign promise of 2 million won is double what the Moon administration set as a goal during its term. The presidential candidate’s campaign team explained Yoon’s initiative is achievable by making adjustments to the yearly budget.

According to Yoon’s election campaign committee, South Korea in 2022 has set aside 21 trillion won to pay wages for its around 300,000 enlisted soldiers, and the country will need 5.1 trillion won more to provide 2 million won a month for these conscripted draftees.

The 7.2 trillion won as presented by Yoon would account for 13.2 percent of Defense Ministry’s budget for 2022.

Moon's initiative of 1 million won in monthly wages is expected to require 3.1 trillion won a year, and Yoon’s team said it needs to draw in 4.1 trillion won more a year to fulfill Yoon’s vision that “the country has responsibility to assure minimum wage to its soldiers.”

"The yearly budget has increased more than 200 trillion won over the past four years, but people’s lives have not improved at all," Yoon said in the Facebook post.

"Unnecessary spending has to be blocked by cutting the budget that the Moon Jae-in administration spent on incomprehensible initiatives. I will prepare the finance through strict budgetary restructuring efforts."

Yoon is certainly not the first candidate to promise improved conditions for soldiers in the ongoing presidential race.

Lee from the ruling party also promised to raise the monthly wage of soldiers to 2 million won by 2027, which would be the final year of next president’s term, and Rep. Sim Sang-jung of the minor left-wing Justice Party promised to ensure conscripted soldiers’ pay reaches the minimum wage level in 2030s.

While Yoon did not present a specific timeline for his vision, his campaign team hinted that the vision would be realized while Yoon was in power. The next president is to serve until 2027.

All of these promises are made in an apparent bid to win the votes of young male voters, especially those in their 20s. For Yoon, winning the support from this group is especially important, as his ratings have dwindled in recent weeks according to polls, following a strife within the People Power Party.

Yoon's announcement was followed by comments that the campaign promise would not solely require 7.2 trillion won, as raising the wage level of conscripted soldiers will accordingly require the military to overhaul the pay scale for military personnel in higher positions.

Raising salaries for all military personnel could be less burdensome in the future, as the pool of eligible enlistees is expected to shrink sharply in the years to come. A report from the Korea Institute for Defense Analyses said last month that the number of men aged 20 is expected to fall from 330,000 in 2020 to 230,000 in 2025 and 135,000 in 2040.

In light of that population trend, Lee proposed a hybrid system where conscription and a volunteer military system are combined in fostering more specialized personnel.

Some experts say the discussion of raising salaries for enlistees during the presidential race could help stimulate a much-needed discussion on bringing greater reform for the South Korean military by making it a workplace of choice while assuring its defense capabilities stay strong.

This could help South Korea later consider ending its long-held conscription system or even discuss having women take part in the mandatory military service in response to declining birthrate and reduced reliance on manpower due to increased use of advanced technologies in military operation.

"Addressing higher wages for soldiers and improving welfare for military personnel ultimately comes down to making the military a place where people want to join as opposed to try to avoid," said Shin Jong-woo, a senior researcher with the Korea Defense and Security Forum.

"Simply raising these soldiers' wages can't bring any meaningful improvements. The system must be made so that people want to join the military or even stay put for the benefits, social standing and acceptable salary levels."

Shin emphasized that presidential candidates should be prepared to strive toward social consensus in fulfilling their promises. Simply laying out promises to win votes or shunning some policy moves in fear of losing votes has greatly cost the country and hindered making necessary progress, he said.

"The political circle has brought down the duration of service now down to 18 months to simply win votes, and the same is the case in shouting to give more money to soldiers," Shin added.

"In today's Korea there’s no such thing as social consensus that is required to bring in hard discussions like expanding the draftee pool. That should be a core objective for presidential candidates in preparing their campaign promises."