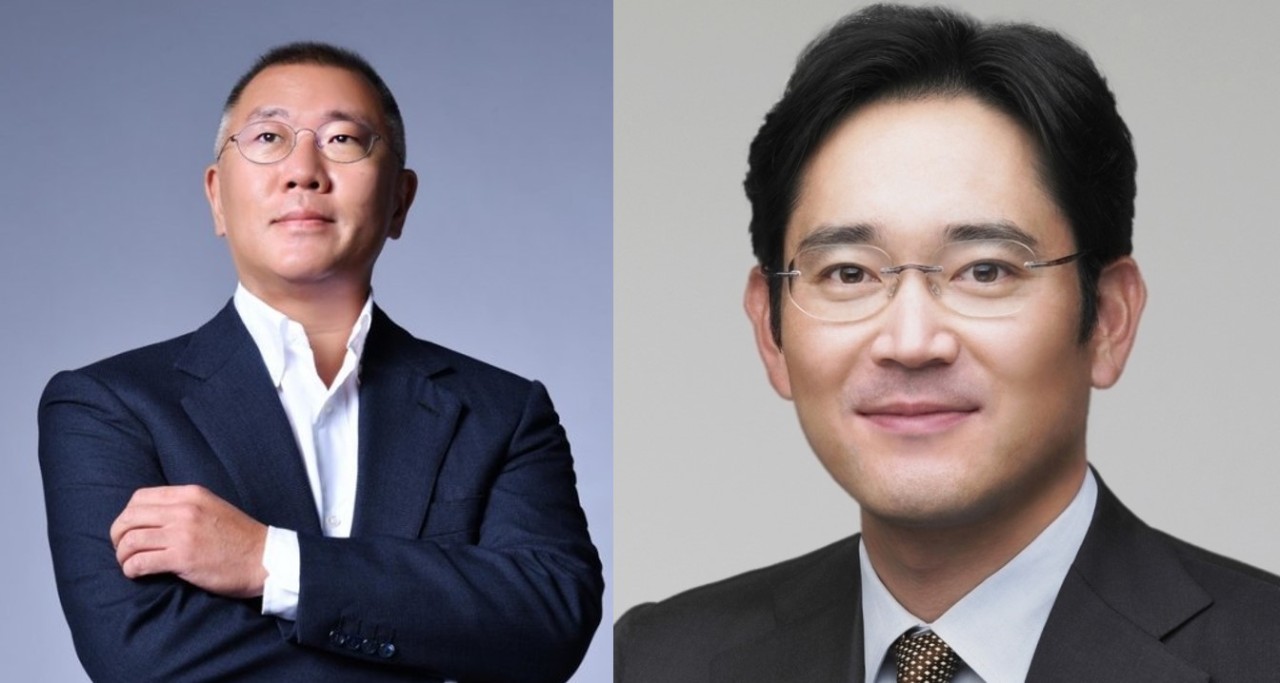 Deliveries of preordered vehicles have been delayed for months, not because of Korea‘s notorious labor strikes or price hikes in materials, but because of the tiny missing auto chips, which are essential for their digitized auto control system.

Not just sharing common roots as Korean entities, Samsung, the world’s largest chipmaker and also a major battery supplier, seems to be an attractive business partner for Hyundai.

The auto titan has been apparently seeking new partnerships with semiconductor makers -- like Ford did with GlobalFoundries for its strategic auto chip supply. And Hyundai Motor Group’s Global Chief Operating Officer Jose Munoz said in an interview last year that Hyundai will not produce auto chips on its own, hinting at cooperation with global IT firms.

But their prospective alliance, which has been highly anticipated by the market for years -- and also by President Moon Jae-in -- is not as easy as it looks, according to experts.

Samsung and Hyundai have no history of business collaboration. Some say it could be their veiled rivalry. Market insiders say Samsung might feel that auto chips are unattractive for massive investment and not as profitable as its key cash cow, memory chips.

Unlike mass-produced memory chips, auto chips vary by vehicle and are produced in relatively small batches. One automaker could contract seven different chipmakers for 38 microcontroller units used to produce a single SUV.

According to market data, automotive chipmakers like NXP and STMicroelectronics earn some 3 trillion to 4 trillion won ($2.5 billion-$3.3 billion) in annual sales, with an operating profit rate of around 12 percent on average.

In comparison, Samsung Electronics earned some 51 trillion won for 2021, up 43.3 percent from a year prior.

“The automotive chip market is not a big market for Samsung Electronics to push ahead with a huge investment. Samsung’s foundry business is already making good money, so there is no clear motive for the company to make automotive chips on a consignment basis,” said Chun Hwang-su, a researcher at the Electronics and Telecommunications Research Institute.

A market insider familiar with semiconductor manufacturing said that high-value automotive chips used for vehicles require updated facilities for production, so only large-scale manufacturers like Taiwan Semiconductor Manufacturing Co. can handle the amount when an order is given.

Samsung, in recognition of the growing importance of auto chips, however, has been expanding its reach, targeting global carmakers. In recent months, Samsung has introduced advanced chips for cars, a rapidly growing market fueled by higher levels of car electrification and updated electric vehicles.

Research firm IHS Markit has forecast the global market for automotive semiconductors to grow 7 percent annually to reach $67.6 billion in 2026. Industry data also estimates auto chip demand to grow to $208.3 billion in 2027 from $132.5 billion in 2020.

But in the auto chip market, Samsung is a new -- and minor -- player.

Samsung and Intel dominate the overall semiconductor market, while TSMC practically stands alone in the foundry business and Qualcomm and Nvidia lead the fabless business.

“The automotive chip market regards brand value as more important than manufacturing skill due to the safety of the product. That’s why existing client-supplier relationships between finished carmakers and chip manufacturers have continued based on deep ties and trust. This becomes a hurdle for new entrants to the market,” said Kim Hyun-tak from the Electronics and Telecommunications Research Institute.

The possibility of the two Korean businesses forging ties flared up again last month at a presidential luncheon where both heirs to the electronics and auto empires were invited.

Addressing his concern over the global chip shortage, Moon said, “I‘d like to see Samsung and Hyundai Motor more closely cooperate in the area of auto chips.” 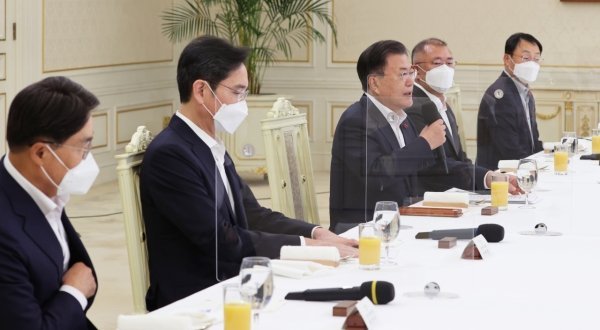 President Moon Jae-in speaks at a luncheon held at Cheong Wa Dae on Dec. 27. On his left is Samsung Electronics Vice Chairman Lee Jae-yong and right is Hyundai Motor Group Chairman Chung Euisun. (Yonhap)
Samsung Electronics Vice Chairman Lee Jae-yong and Hyundai Motor Chairman Chung Euisun left the meeting without saying a word on the president’s impromptu proposal, but they will eventually work together for auto chips, other experts say.

“Automotive will become the hub of everything in people’s lives, replacing the role of a smartphone,” said Noh Geun-chang, head of Hyundai Motor Securities, adding that IT firms will lead the future mobility market.

At the latest CES 2022 trade show, Japanese tech giant Sony announced a plan to launch a company to examine entering the electric vehicle market, making use of its strengths in entertainment and sensors in next-generation mobility.

“Samsung and Hyundai’s partnership will allow the former to reach its goal of connected car product business, while the automaker will secure technologies in the ICT and battery sectors,” said Kim Pil-soo, a professor of automotive engineering from Daelim University.

Kim said that Samsung’s decadeslong desire to penetrate the automotive market can be fulfilled through an alliance with Hyundai Motor, which seeks to solve the electric vehicle battery production issue.

In 2016, Samsung intended to bolster its competitiveness in connected car products through the takeover of US audio electronics company Harman International for $8 billion. But Harman’s performance has yet to justify its hefty price tag.

At CES 2022, Samsung unveiled the latest digital cockpit which features augmented reality-embedded monitors for drivers, using cameras and sensors to analyze the surroundings.

“We expect the commercialization of this product will take five years at maximum and Harman will be responsible for launching the product, gradually increasing the functions included in the product,” said Yeo Tae-jung, vice president of automotive electronics R&D at Samsung Electronics.

What boosted the possibility of the collaboration was the Hyundai chief making a rare visit to the Samsung booth at CES last week. 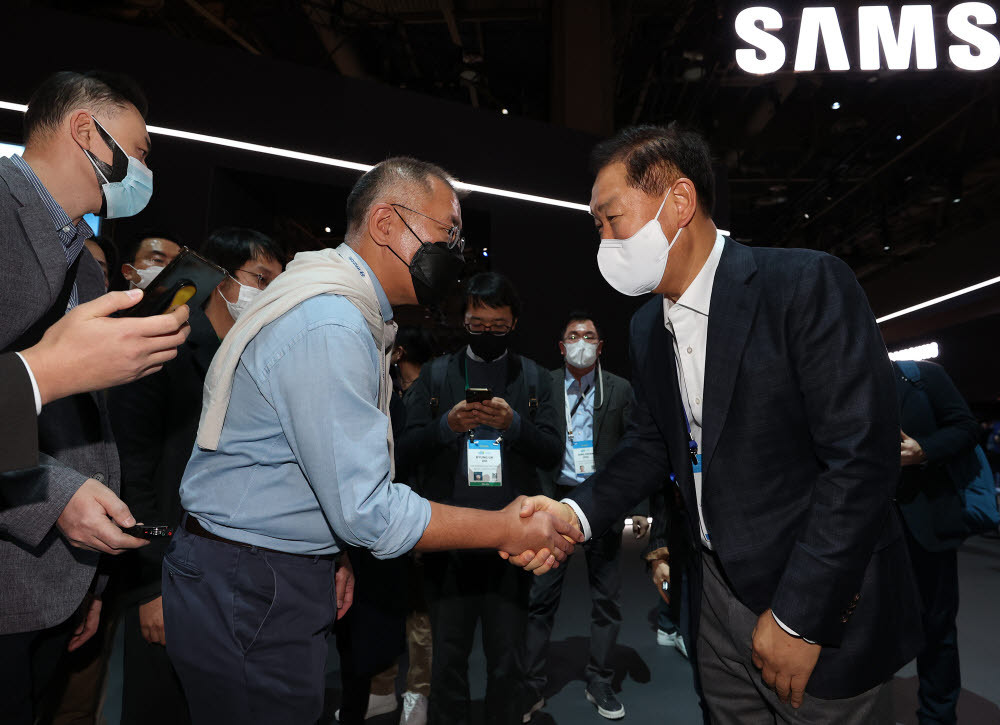 “It is not an exaggeration that Samsung has really completed the full package to make an EV with the Harman acquisition, but Harman’s R&D for new products is not showing the expected levels of output,” said professor Kim. “The collaboration with Hyundai could spur the IT firms’ competitiveness in the connected car product in the long-term.”