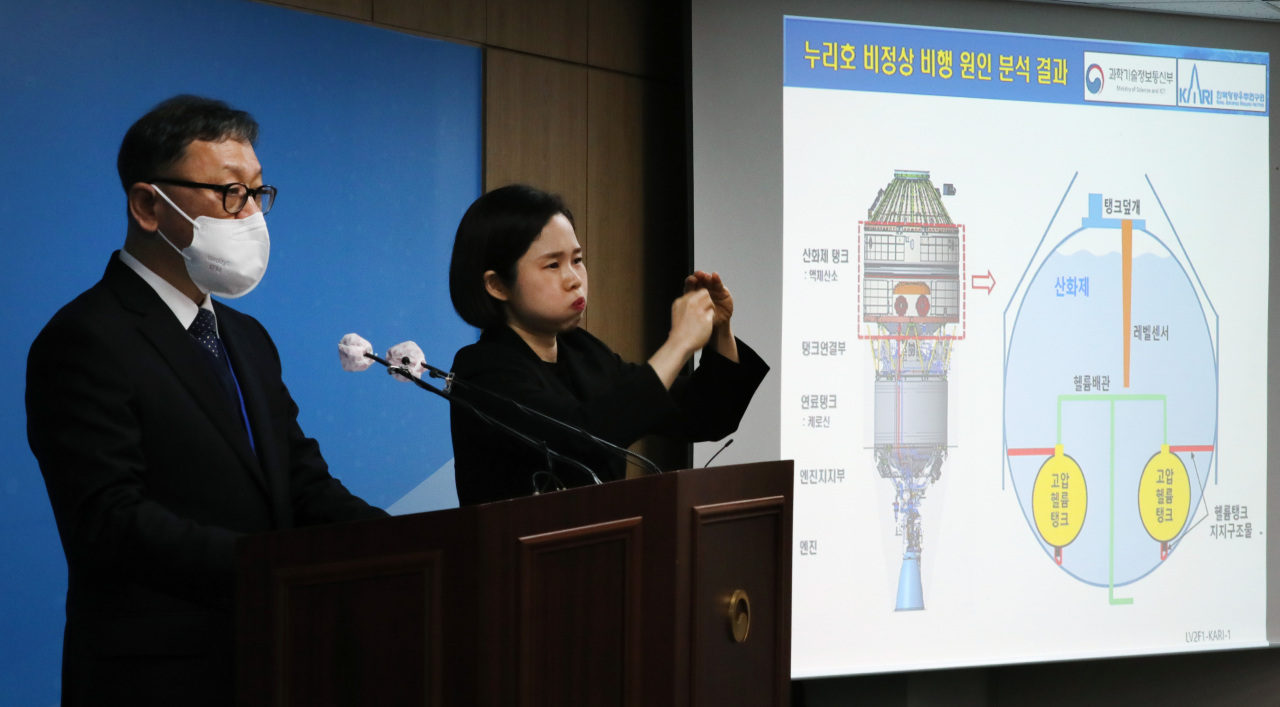 Choi Hwan-seok, vice president of Korea Aerospace Research Institute, speaks during a briefing on the investigation of Nuri rocket’s failure at the Ministry of Science and ICT on Wednesday. (Yonhap)
The loosening of a fixture that holds a helium tank of the Nuri rocket blocked the country’s first homegrown rocket from a successful launch, officials said Wednesday.

After two months of data analysis, government officials and experts concluded that the degree of buoyancy increase during flight was not sufficiently considered when designing the fixture for Nuri’s helium tank.

According to the Science Ministry and Korea Aerospace Research Institute, an unusual vibration from Nuri was detected 36 seconds after the takeoff, indicating that was when the helium tank was detached. As the helium tank became loose, it continuously wobbled to cause a leakage that eventually led to a crack in the oxidizer tank.

With the oxidizer tank losing its content and not being able to provide enough oxidizer, the rocket’s third-stage engine turned off earlier than scheduled as Nuri failed to put a dummy satellite into the targeted orbit.

“We regret that we did not fully consider the increase in buoyancy during the flight acceleration. We will thoroughly prepare for the second launch in the future,” said Choi Hwan-seok, vice president of KARI, in a press briefing.

The second launch of Nuri, which is scheduled to take place in May, is expected to be delayed.

Choi explained that considering the time it takes to implement design changes and accordingly build an improved version of the fixture for the helium tank, it is like the second launch will be postponed. It is hard to tell when it will be ready to launch at the moment, he added.

Meaning “world” in the Korean language, Nuri completed its flight sequence as it reached a low orbit of 700 kilometers above the Earth after blasting off from the Naro Space Center in Goheung, South Jeolla Province, on Oct. 21.

The Ministry of Science and ICT and Korea Aerospace Research Institute formed a committee to figure out what went wrong during the launch after the Nuri rocket fell short of its goal.