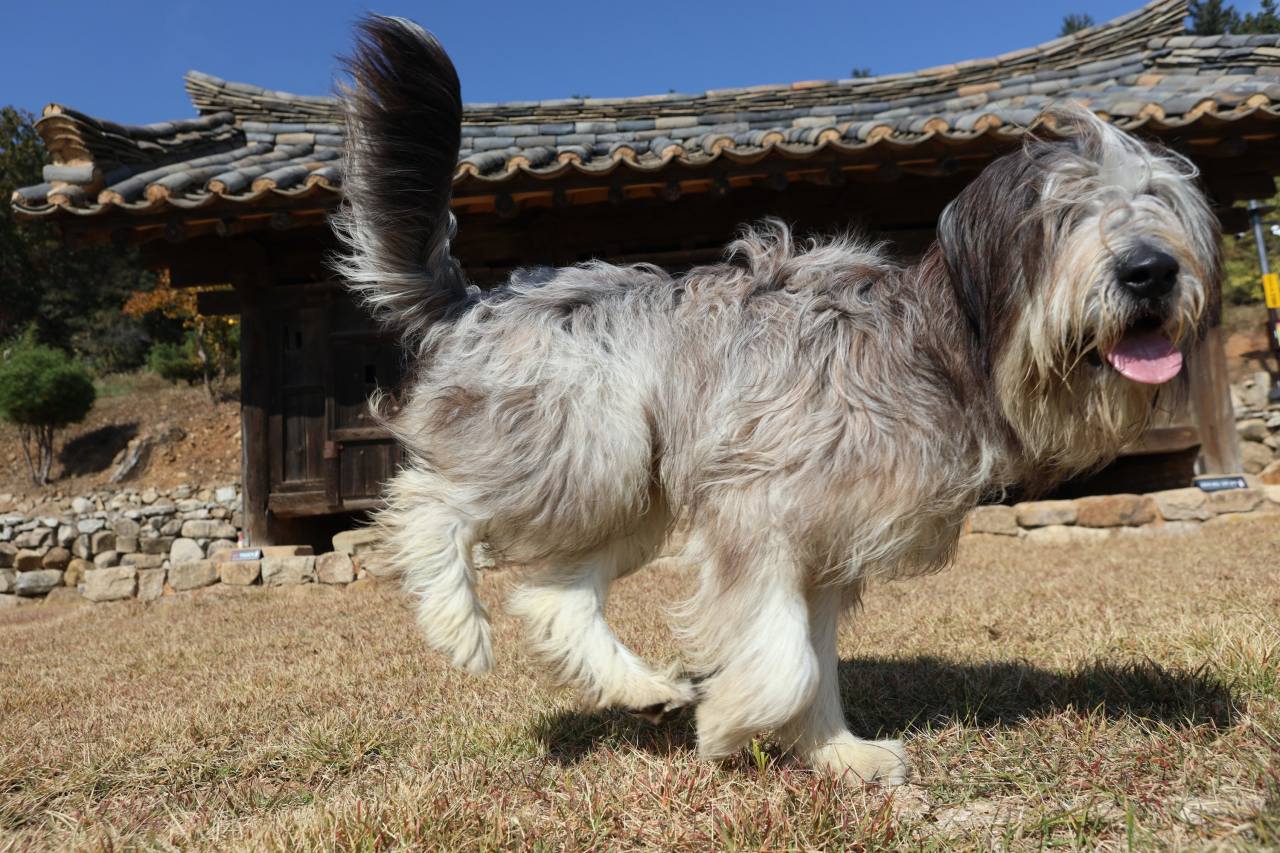 One of the earliest evidence of dogs in Korea is a prehistoric rock carving showing a dog, along with wild animals, at the Bangudae Petroglyphs, in Ulju, near Ulsan.

The Stone Age Neolithic era carving, on a vertical cliff face, shows an oval-chested, arched back dog, with tail pointing up -- a typical image of the Korean native breed of dogs.

Dogs, one of the first domesticated animals, have moved with people as they migrated in search of food and secure places to live. Man’s best friend has been helping humans hunt, provide security and keep us company. Because dogs have always been with us, domestic dogs are a walking history book when we look at their DNA.

Remains of dogs are found in ancient archeological digs and modern science has been able to decipher the genome to define how the modern breeds are related to ancient dogs.

Preliminary research into the DNA of Korean dogs gives us encyclopedic information about their history and consequently their family tree.

Sapsaree dogs are found to be at the top of the genetic hierarchy of dogs in East Asia, including Jindo, Donggyeongyi, Pekingese, Pug, Shih Tzu, Tibetan Mastiff and Tibetan Terrier breeds.

Sapsaree dogs in Korean culture are defined as all dogs with long hair. The heterogeneous genetic pool of Sapsaree led to the re-discovery of the Spotted Sapsaree, better known in Korean history as Baduki, being born along with long haired Sapsaree, which show up in Joseon period paintings.

This is probably a result of a long history of dogs not being tied down or fenced in rural villages until modern leash laws mandated that all dogs be on a leash when they are outside.

During my research visit in the 1990s to Jindo, the island’s native dogs were guarding their masters’ homes by sitting in the middle of the road in front of the houses, getting up only to yield to oncoming cars. They would return to the middle of the road once the cars had passed by. The loose Jindo dogs in the village got along with each other without any territorial conflicts, but there definitely was order and hierarchy among the dogs.

One of the local families I interviewed did not know which dog fathered their puppies. There was a natural selection taking place at night, with dominant male Jindo going around the island competing for mating opportunities. “I never know who sired my puppies,” said the owner of a female Jindo with a litter. “The male Jindo dogs only visit under the cover of darkness.” 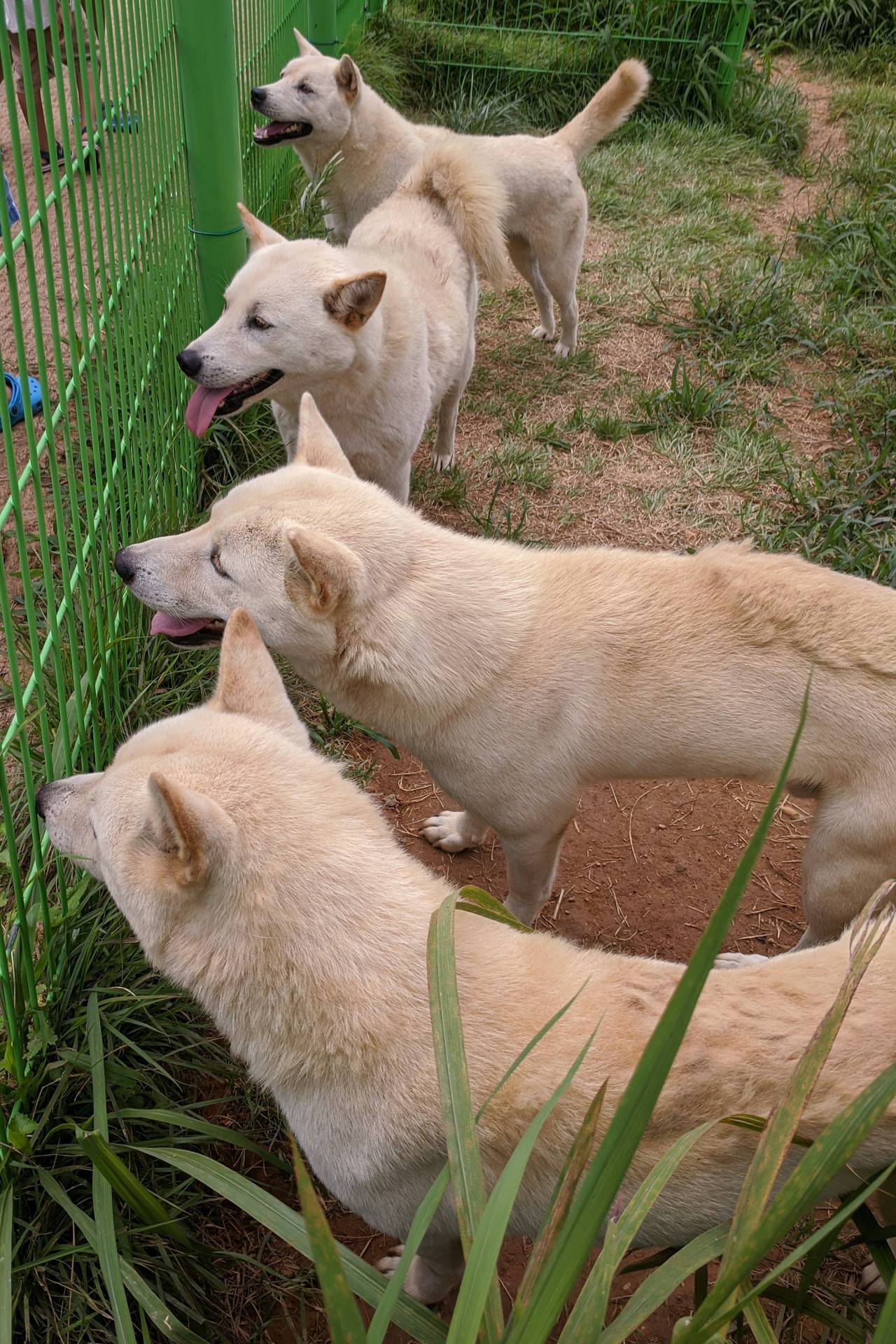 Jindo dogs await visitors with treats at the Jindo Theme Park on Jindo island, South Jeolla Province. Photo ©2020 Hyungwon Kang
The natural selection on the island meant that there was a healthy genetic diversity within the Jindo dogs.

This ancient breed of Jindo dogs is known for its intelligence, exceptional hunting skills, intense loyalty, incredible ability to find its way home, sometimes from hundreds of miles away, and overall absence of genetic defects. Natural selection was responsible for the strength and health of the breed, which lived on the island, in isolation from the mainland, for centuries, until a 484-meter long bridge connected the island to the mainland in 1984. Another bridge was added the following year to the original in 2005 to double its traffic load capacity.

In the 1930s, during the Japanese colonial period, except for the Jindo dog breed, all other dog breeds faced extinction when they were slaughtered to make winter coats for the Japanese military. Korea lost most of its native breeds.

But there are places so remote in Korea, mostly in the mountains, that some Sapsaree survived the slaughter.

When Ha’s son, Ha Ji-hong, who had just returned with his Ph.D in microbial genetics from the University of Illinois at Urbana-Champaign, saw his father’s Sapsaree dogs, the breed was in danger of extinction.

The young researcher eventually switched his area of research to animal genetics and proceeded to restore the Sapsaree breed. That was more than 35 years ago.

The fact that the Sapsaree breed’s future was not determined by commercial dog breeders but rather by a nonprofit organization enabled the best possible outcome for the breed.

The Sapsaree population has no known defects or genetic problems that are prevalent among purebred dogs. 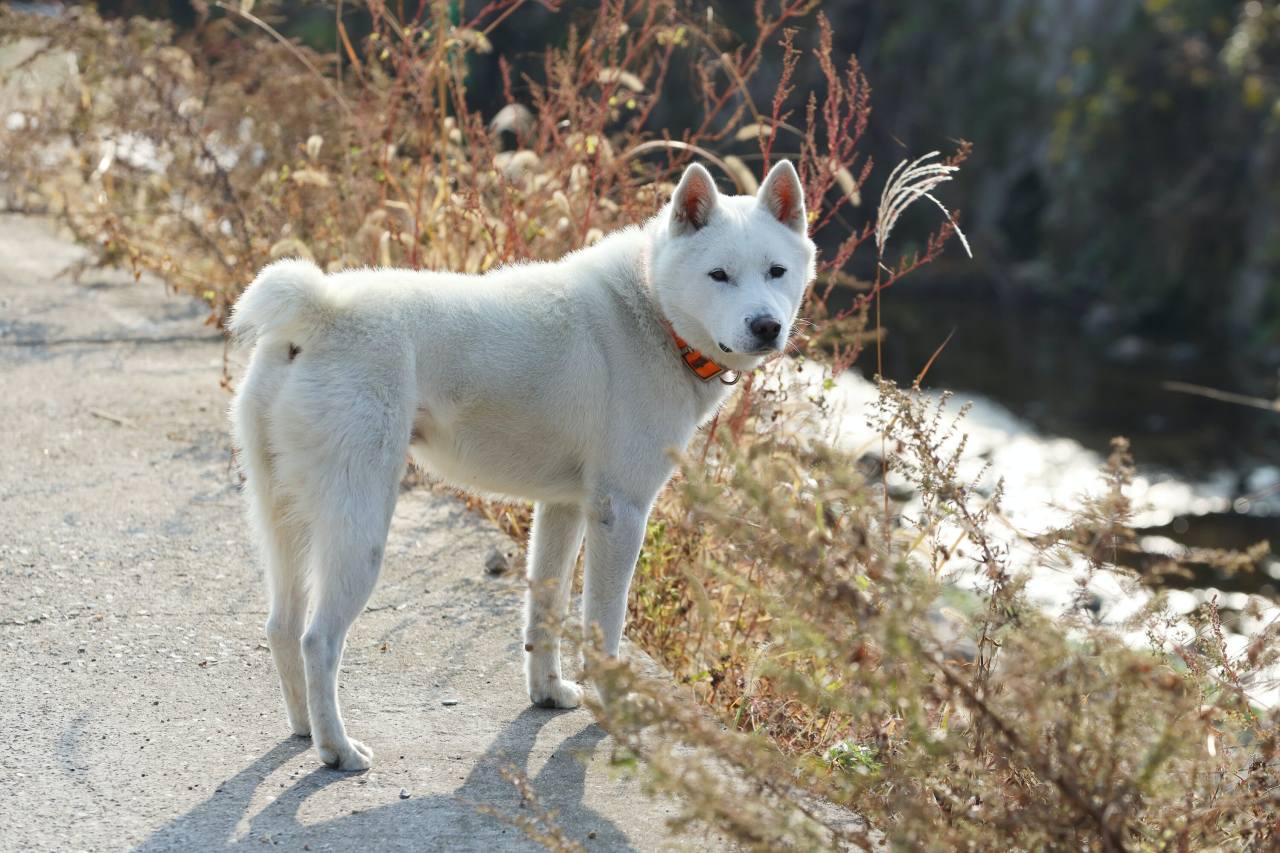 A Donggyeongyi named Seok-dol in Gyeongju, North Gyeongsang Province.Photo ©2020 Hyungwon Kang
Donggyeongyi, the Gyeongju Donggyeong Dog, Natural Monument No. 540, was the latest to join the ranks of the protected native breed.

On the outside, Donggyeongyi look identical to Jindo dogs except for the naturally docked tail. Like other Korean native breeds, Donggyeongyi is gentle with children and people but fiercely dominant among dogs.