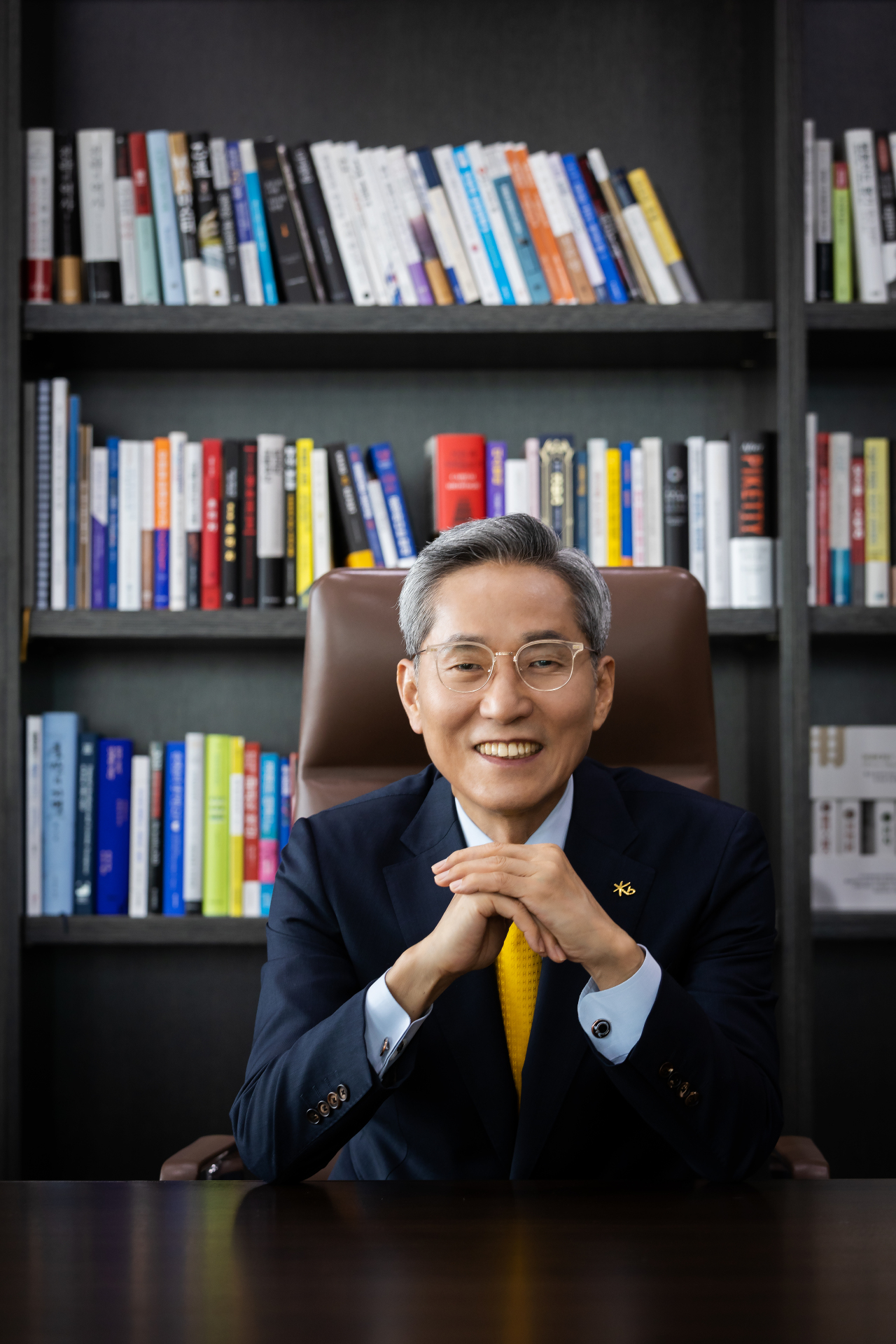 Despite the problems of the pandemic, 2021 was a landmark year for KB Financial Group as it celebrated its 20th anniversary.

Under the leadership of its Chairman Yoon Jong-kyoo, the firm not only clinched the title of the nation’s No.1 banking group by total asset, but made unprecedented progress in adoption of environmental, social and governance values, including an endorsement by one of the most important global ESG organizations

In its yearslong battle for the title of Korea’s No.1 banking group with industry rival Shinhan Financial Group, KB gained the upper hand this year by reporting a record-breaking total assets of 650.5 trillion won ($551.5 billion) as of the end of September. This eclipses Shinhan’s 638.7 trillion won in the same period. KB’s net profit in the January-September period gained 31.1 percent on-year to 3.7 trillion won.

The robust profit so far is a result of Yoon’s efforts to acquire brokerages and insurers in recent years, slowly cultivating its reputation as a solid banking group. Bolstered by the nation’s bullish stock market this year, its brokerage unit KB Securities’ net profit in the first nine months of the year jumped 58.6 percent on-year to 547.4 billion won. KB acquired the brokerage unit -- formerly Hyundai Securities -- for some 1.2 trillion won from Hyundai Group in 2016.

Alongside setting new records for its total assets and net profit, KB has been a trailblazer in the finance sector in adopting environmental, social and governance values.

The firm said in October, it has been officially endorsed by the Science Based Targets Initiative, becoming the first financial institution in Asia to receive the green stamp from the global body.

SBTi is an organization that assesses corporate green goals based on science. In recent years, its endorsement has grown to be a key certificate to get for businesses seeking to validate their emissions targets.

KB Financial’s net-zero goals dubbed “KB net zero star” focuses on reducing its portfolio’s carbon emissions by 33.3 percent by 2030, 61 percent by 2040 and ultimately achieve neutrality by 2050. It plans to give loan benefits in terms of line of credits and interest rates for corporates that can prove their carbon offsetting plans.

The firm’s net-zero goals were shared worldwide by Yoon at an invitation-only meeting of senior officials across global sectors and governments held Nov. 10 at the 2021 United Nations Climate Change Conference in Glasgow, Scotland, the firm said Thursday. 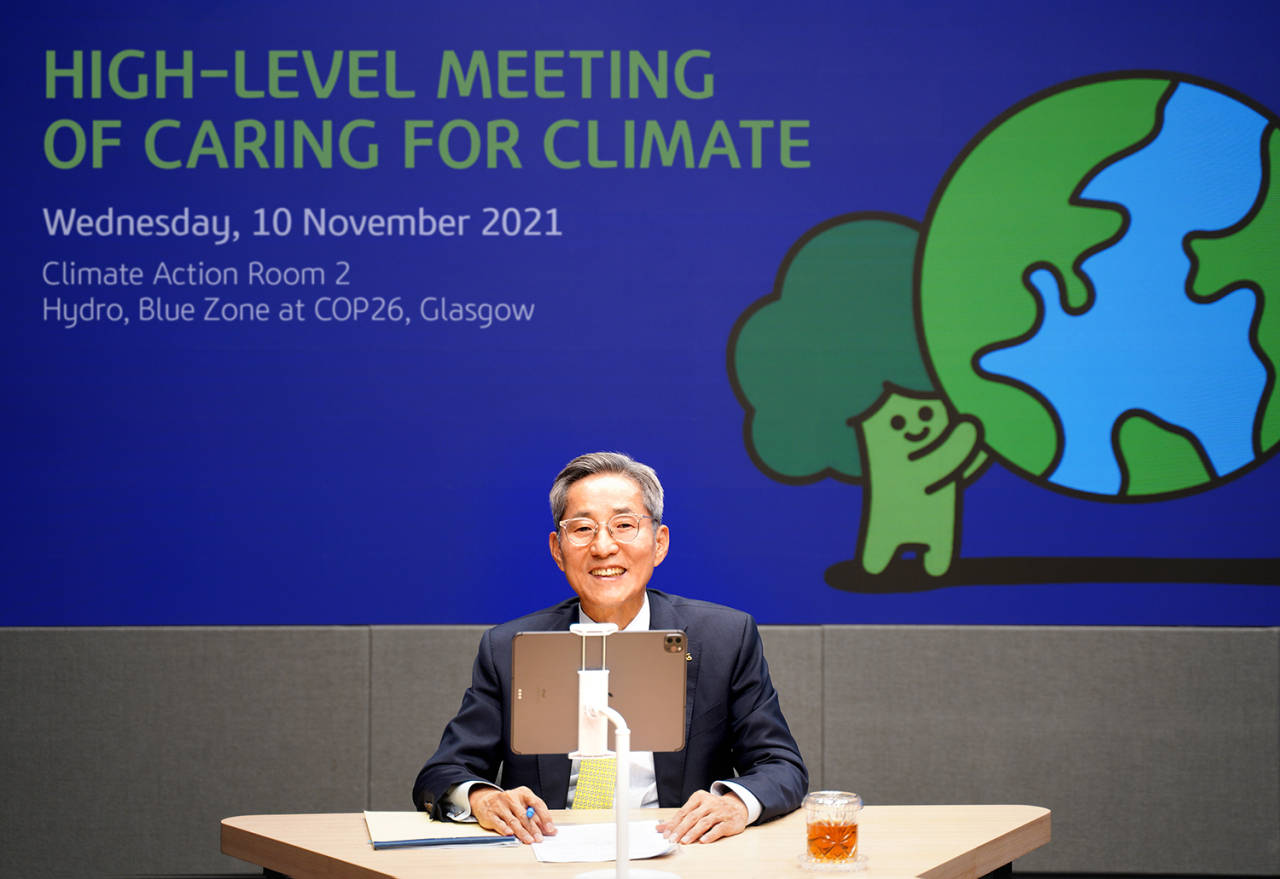 KB Financial Group Chairman Yoon Jong-kyoo attends the 9th High-Level Meeting of Caring for Climate of the 2021 United Nations Climate Change in Glasgow, Scotland, via video conference, at the banking group’s headquarters in Yeouido, western Seoul on Nov. 10. (KB Financial Group)
At the 9th High-Level Meeting of Caring for Climate, held online and offline simultaneously, Yoon was invited on behalf of the global finance sector to speak on the topic of achieving a just, equitable and inclusive transition to a net-zero society. UN Secretary-General Antonio Guterres, Greenpeace International Executive Director Jennifer Morgan and British drugmaker AstraZeneca Chairman Leif Johansson were among those invited to speak at the meeting.

In September, KB became the first Korean financial group to endorse RE100, a global initiative to get the world’s most influential businesses to commit to 100 percent renewable electricity.

This year also marked the 6th consecutive year that KB was included on the Dow Jones Sustainability Index. Only 24 financial institutions around the world were included in the longest-running global sustainability benchmarks this year.

KB was able to truly call itself a banking giant only after Yoon became its chairman in 2014 by acquiring necessary businesses including Prudential Life Insurance of Korea. It purchased the insurer from British multinational insurance company Prudential for about 2.3 trillion won last year.

He then went back and forth between KB and the nation’s prestigious law firm Kim & Chang as executive adviser, before taking on the current position as chairman. Yoon is now serving his third term as KB chairman.