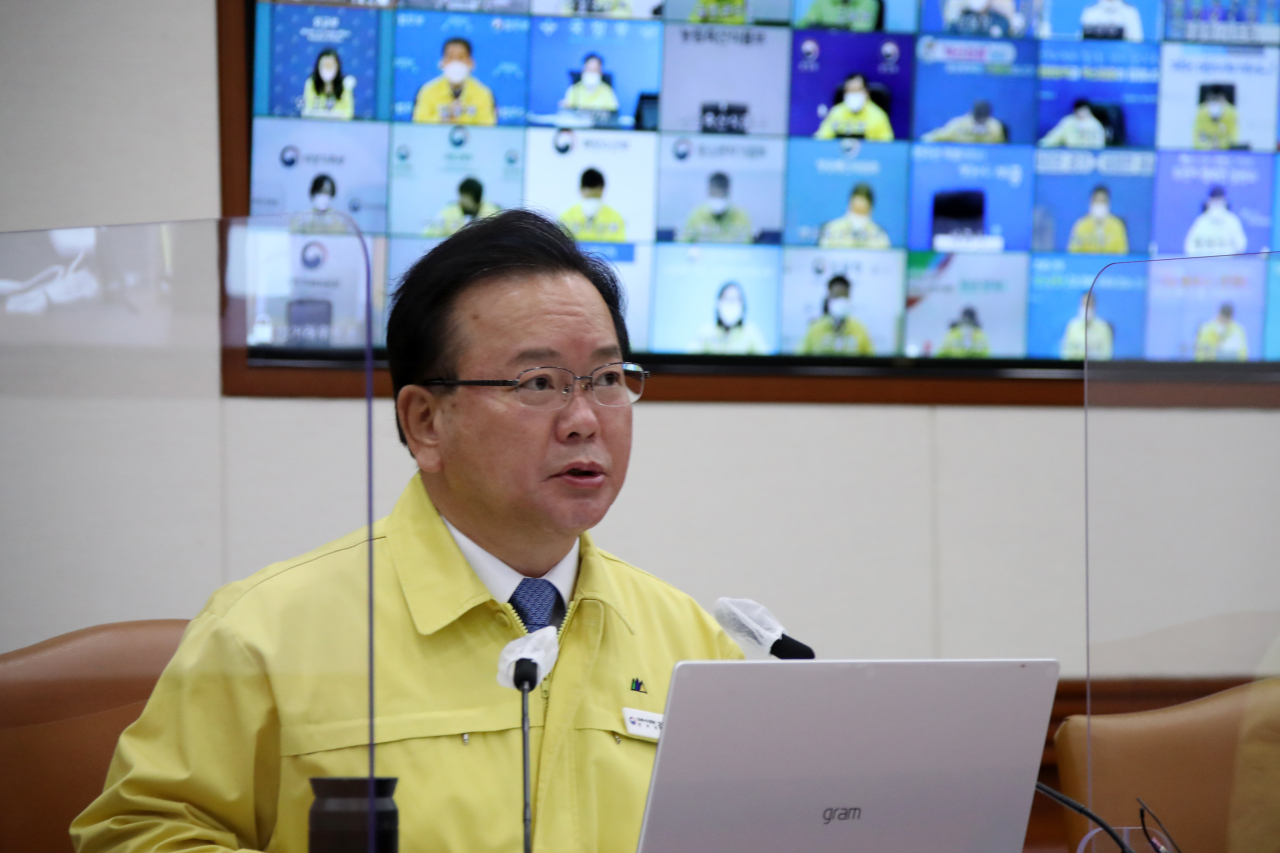 Prime Minister Kim Boo-kyum speaks during a meeting of the Central Disaster and Safety Countermeasures Headquarters at the government complex in Seoul on Friday. (Yonhap)
South Korea will limit private gatherings to six people in the capital area and eight in other regions for four weeks starting next week, Prime Minister Kim Boo-kyum said Friday, reversing an easing of distancing rules adopted under the "living with COVID-19" scheme last month.

Kim announced the new measure during a meeting of the Central Disaster and Safety Countermeasures Headquarters amid a surge in COVID-19 infections in the country and heightened fears of the more contagious omicron variant.

Currently the cap is 10 people in the capital area and 12 in other regions.

Kim also said most public facilities, including restaurants and cafes, will be added to the list of businesses requiring proof of vaccination or a negative test for entry.

The government will allow a one-week grace period before enforcing the so-called vaccine pass system at the additional facilities.

The vaccine pass system will apply to teenagers starting next February after more of them are vaccinated.

"The government will focus on firmly reinforcing the dike (against COVID-19) for the next four weeks," Kim said during the meeting.

"Even after today, the government will regularly assess all antivirus conditions and, if necessary, take swift measures to strengthen the antivirus campaign at any time," he added.

South Korea has seen new cases above 5,000 for the past two days in a record high since the pandemic began early last year.

Critical cases have also hit above 700, leading to shortages of hospital beds and putting additional strain on the health care system.

The emergence of the omicron variant has added to concerns, with six people confirmed to have been infected with the new variant as of Thursday.

Kim urged senior citizens to get their booster vaccine shot and teenagers to receive their regular doses, saying vaccines are the best safeguard against the disease.

He also asked businesses to have employees work from home as much as possible until the end of the year.

Starting Friday, December will be designated as the government's "special antivirus inspection period" in an effort to contain the virus.

Additional details of the new measures will be announced in a press briefing later Friday. (Yonhap)