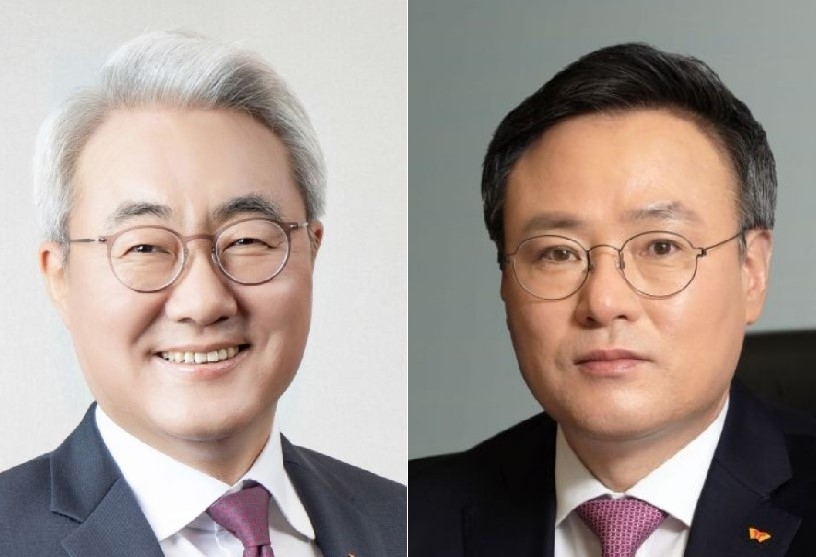 SK Innovation CEO Kim Jun (left) and SK Inc. CEO Jang Dong-hyun
SK Group, the nation’s third-largest conglomerate, seems to be opting for stability rather than drastic changes in its year-end executive reshuffle, retaining all the CEOs at its key affiliates.

While maintaining the top brass, 133 new executives are receiving promotions, the largest class in the past three years, in an apparent move to add weight to its new growth engine businesses that are still in their nascent phases with the potential to lead the group’s future.

“Almost 70 percent of the new executives were promotions at the group’s four core businesses, including high-end materials, bio, green energy and digital,” an SK official said.

In the top brass, two CEOs -- SK Inc. CEO Jang Dong-hyun and SK Innovation CEO Kim Jun -- were promoted to gain the title of vice chairman. Now the group has a total of six vice chairmen overseeing chip, energy, battery and China businesses under the leadership of Chairman Chey Tae-won.

Jang, known as a financial specialist, has led the group’s investment arm since 2017. He joined SK Innovation, formerly Yukong, in 1991 and rose to president of SK Telecom in 2014.

In recent years, he has led the group’s key acquisitions in the fields of its core materials, energy and digital businesses.

SK Innovation CEO Kim, considered one of the top strategists at the group, also joined what was then Yukong in 1987 and worked at key affiliates, mostly at the SK Supex Council, the group’s top decision-making body.

He is credited with enhancing the company’s future value by focusing resources into its burgeoning battery business while leading the eco-friendly transformation of its core refinery and chemicals business.

In the meantime, Chey Jae-won, the chairman’s younger brother and an executive vice chairman, was not included in the leadership reshuffle, fueling speculation about his imminent return to management.

The junior Chey, who served a jail term of 3 1/2 years for embezzling company funds in 2014 and was released on parole in 2016, is highly likely to return to management sometime soon after his five-year employment ban was lifted as of October.

Industry sources say he is expected to take a leadership role at SK On, the new battery spinoff from SK Innovation. SK Innovation said leadership changes at SK On will be announced later this month, citing ongoing global projects involving partnership deals.

Chey Jae-won, who holds a bachelor’s degree in physics from Brown University and a master’s degree in materials science from Stanford University, has been deeply involved in the group’s latest battery push. He has maintained his unregistered executive title at SK Inc. and SK E&S.

Meanwhile, the memory chip giant said it is setting up a new business unit in the US as part of its latest push to further expand in the American market. The new unit, under the purview of CEO Lee Seok-hee, aims to bolster the firm’s competitiveness in NAND memory business and expand partnerships with global tech firms.