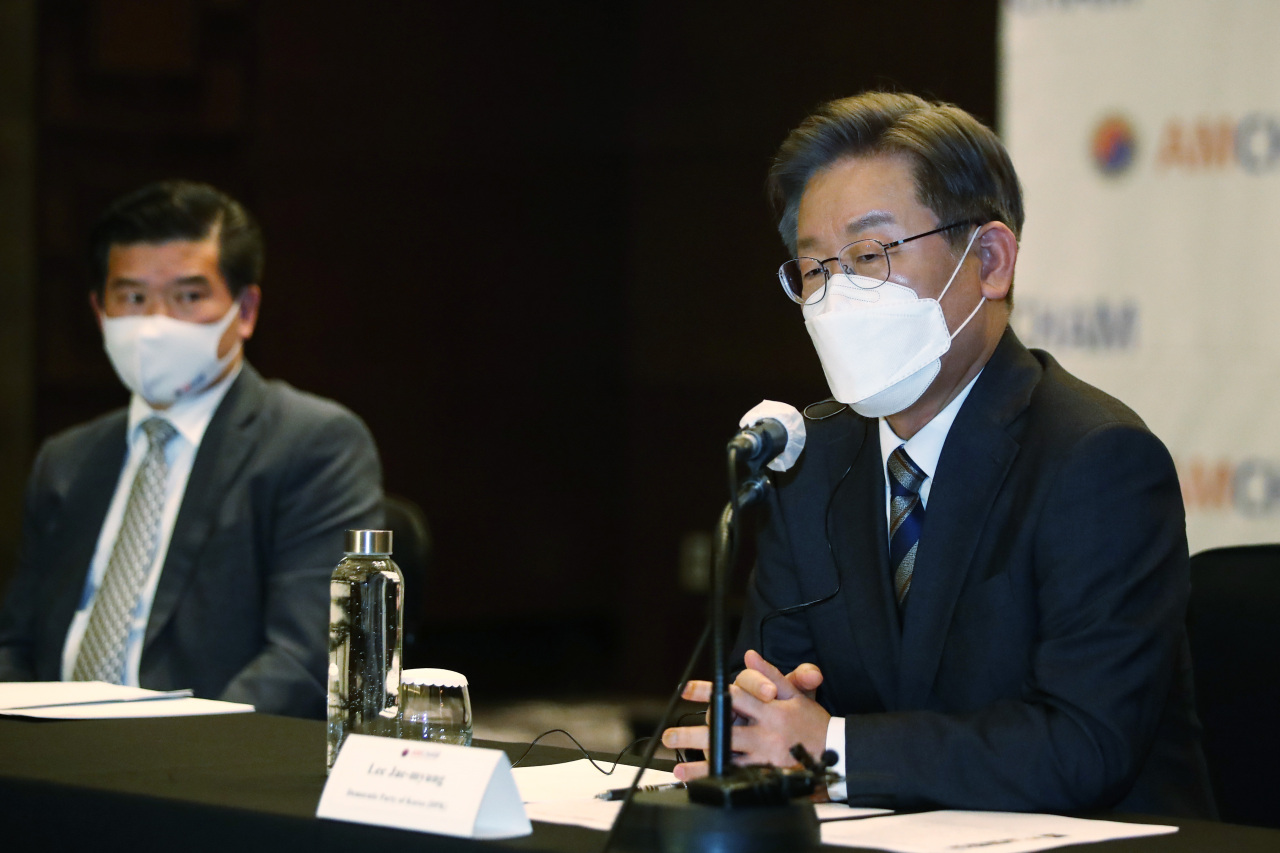 Lee Jae-myung, presidential nominee for the ruling Democratic Party of Korea, speaks Thursday in a meeting with representatives from the American Chamber of Commerce in Korea held in Yeouido, western Seoul. (Joint Press Corps)
The presidential candidate for the ruling Democratic Party of Korea on Thursday requested increased investments from foreign firms here, promising to return the favor by lifting regulations and enhancing the business environment for them as part of his vision to revitalize the local economy through "transition."

In a meeting with representatives from the American Chamber of Commerce in Korea, presidential nominee Lee Jae-myung requested foreign firms to increase investments and create jobs as his government plans to unfold a large-scale budget-backed growth plan.

Lee promised sweeping infrastructural investments with a focus on energy and digital transitions to achieve balanced growth as well as the creation of stable, quality jobs, as then-US President Franklin D. Roosevelt did during the Great Depression.

"South Korea’s presence in East Asia is growing, and we are trying to form an environment here where large investments from US firms are readily possible," Lee said in his opening remarks for the meeting.

"A lot of the concerns must be on regulations, and while regulations should be in place or strengthened to promote fairness and efficiency, I must say easing regulations in all other areas is under consideration."

Lee said lifting regulations is key to better adjust to the changing business environment, adding that regulatory limits should be in place primarily to maintain safety and prevent expectable hazards.

He asked foreign firms to direct resources to regions beyond Greater Seoul, as conditions for investment have improved in areas outside the wider capital region for firms to be reasonably interested.

The Thursday meeting was attended by officials from Lee's election campaign team as well as 14 business representatives associated with the US trade promotion agency, including AMCHAM Chairman and CEO James Kim and AMCHAM Board of Governors Chairman Jeffrey Jones.

Kim asked Lee during the meeting to have his government proactively support US firms in Korea and thereby attract foreign investment from key business areas. The support is needed to help Korea grow larger in scale on an international level, he added.

"There is lot of competition with other countries to attract foreign investment from strategic sectors like semiconductors. We need the Korean government's proactive support to win these R&D investments into Korea. Now is a perfect time to put our best effort forward."