From plant-loving visitors to gardening experts, programs are on offer for the public to enjoy education, experience, culture and art related to plants.

The botanic garden is an area within the Seoul Botanic Park, consisting of outdoor theme gardens, greenhouse and Magok cultural hall. Though it is the winter cold that leads many people to begin their tour in the greenhouse, they are soon rewarded by the plants from tropical and Mediterranean countries, including Vietnam, Colombia, Spain, Greece and more.

Another must-see place is the horticultural center inside the greenhouse, the home of plant library, plant science lab, permanent and special exhibition halls. 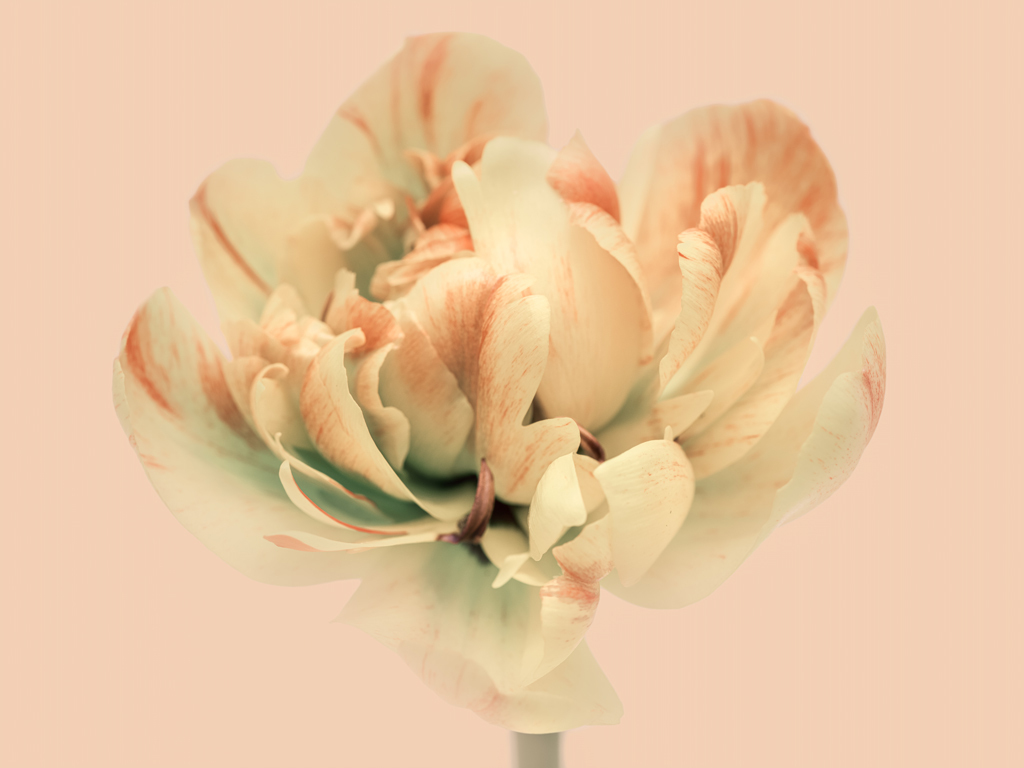 Offline programs are also back, including home gardening and winter gardening with limited number of people in each program. Online reservations are available and the program participants are registered on a first come, first served basis.

More updates are on the Seoul Botanic Park’s website. 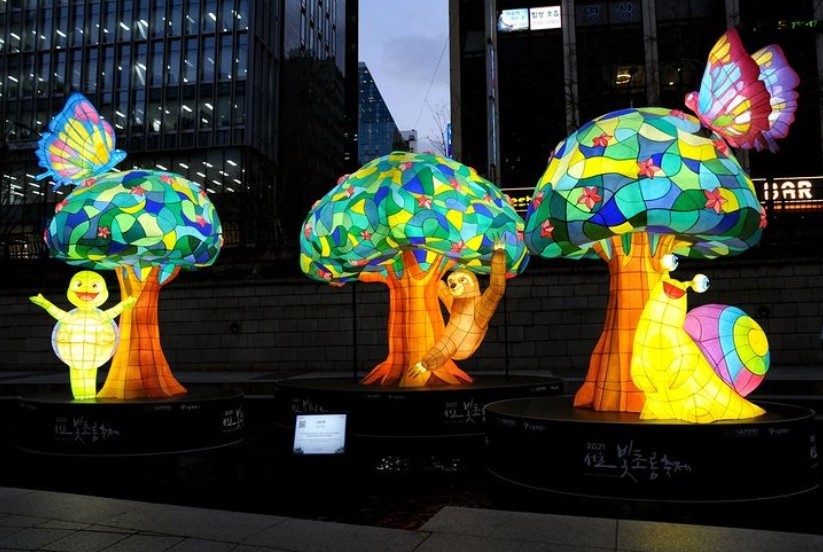 The 13th edition of the festival occupies the 700-meter path of the main Cheonggyecheon Stream with the theme of the “Forest of Healing.” The festival starts with “A Secret Door” at Cheonggye fountain that leads to the Jangtonggyo bridge, where the festival ends. The lantern installations glow from 5 p.m. to 9 p.m. throughout December.

The lantern sculptures include winners of the Hanji Lantern Design Contest, such as “A Starry Cat” by Jeon So-hee, “A Lovely Forest” by Park Jeong-a and Han Aran, and “Lunar Halo” by Seo Arin, Heo Jeong-su and Lee Si-an.

Glowing lantern installations add a cozy mood to the popular stream path in central Seoul, inviting people to enjoy the year-end festive mood. Taking selfies with the beautiful lights as the backdrop is a must at the festival.

If you want to get a glimpse of the lanterns without braving the cold, visit the 2021 Seoul Lantern Festival’s official website. 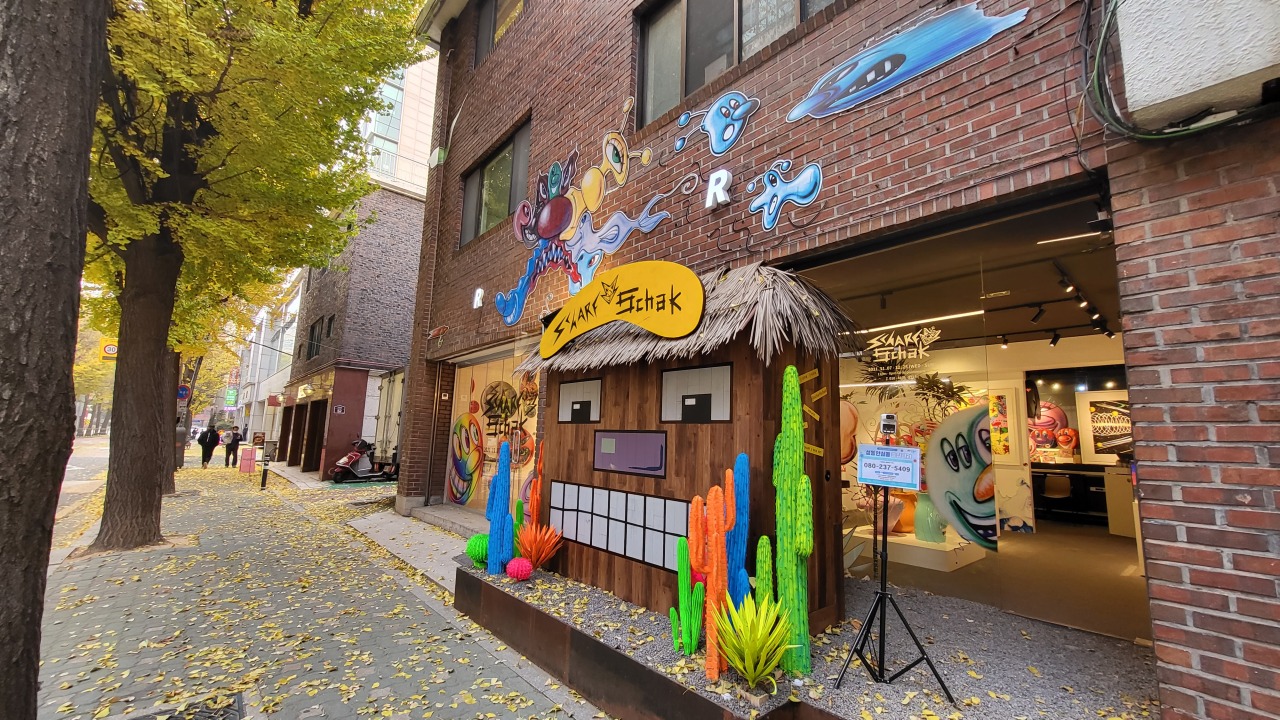 Pop-art exhibit “Scharf Schak” in Seongsu-dong, eastern Seoul (Kim Hae-yeon/ The Korea Herald)
When pop art aesthetics first touched upon environmental issues in the US, bold and playful art appeared on the streets that shocked the passersby -- some confused, some excited to see the new art.

Decades have passed, and a colorfully painted portable art store called, “Scharf Schak,” from New York, has been brought back to life in Seoul.

Scharf began his art career in New York in the 1970s, along with his friends, Keith Haring and Jean-Michel Basquait. In the 1980s, he installed a thatched shack by the sidewalk between New York’s Mercer and Broadway Street, selling his collectibles straight out of his art studio.

An ardent supporter of environmental issues, the artist would customize any type of clothes or commercial objects that people dropped off, drawing his signature Scharf-ian cartoon faces and reselling them. 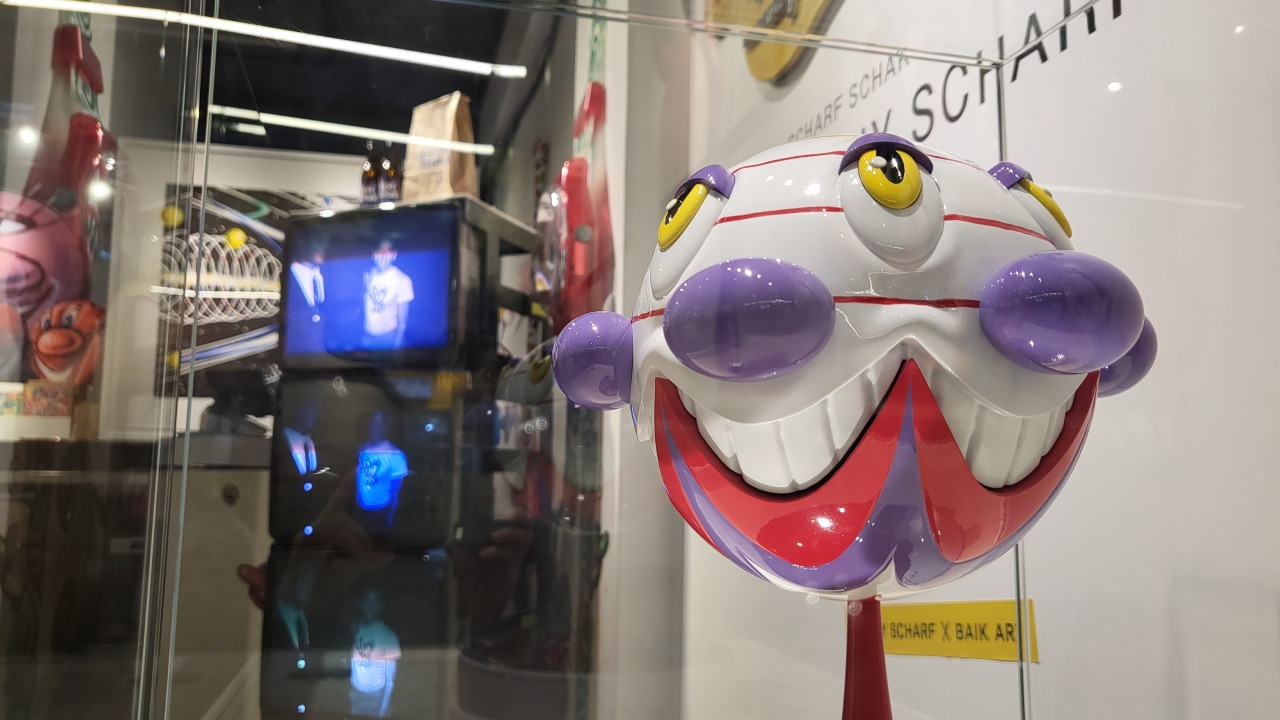 “Toy Ball,” by artist Kenny Scharf, symbolizes Scharf’s childhood memories of a toy ball as well as the earth, which he urges the public to save and protect. (Kim Hae-yeon/ The Korea Herald)
The Seoul exhibition has the original wooden sign for his store, his early paintings, sculptures, prints, and a signature mural.

The pop-up exhibition continues until Dec. 25, and is open from noon to 8 p.m., Wednesday through Sundays.