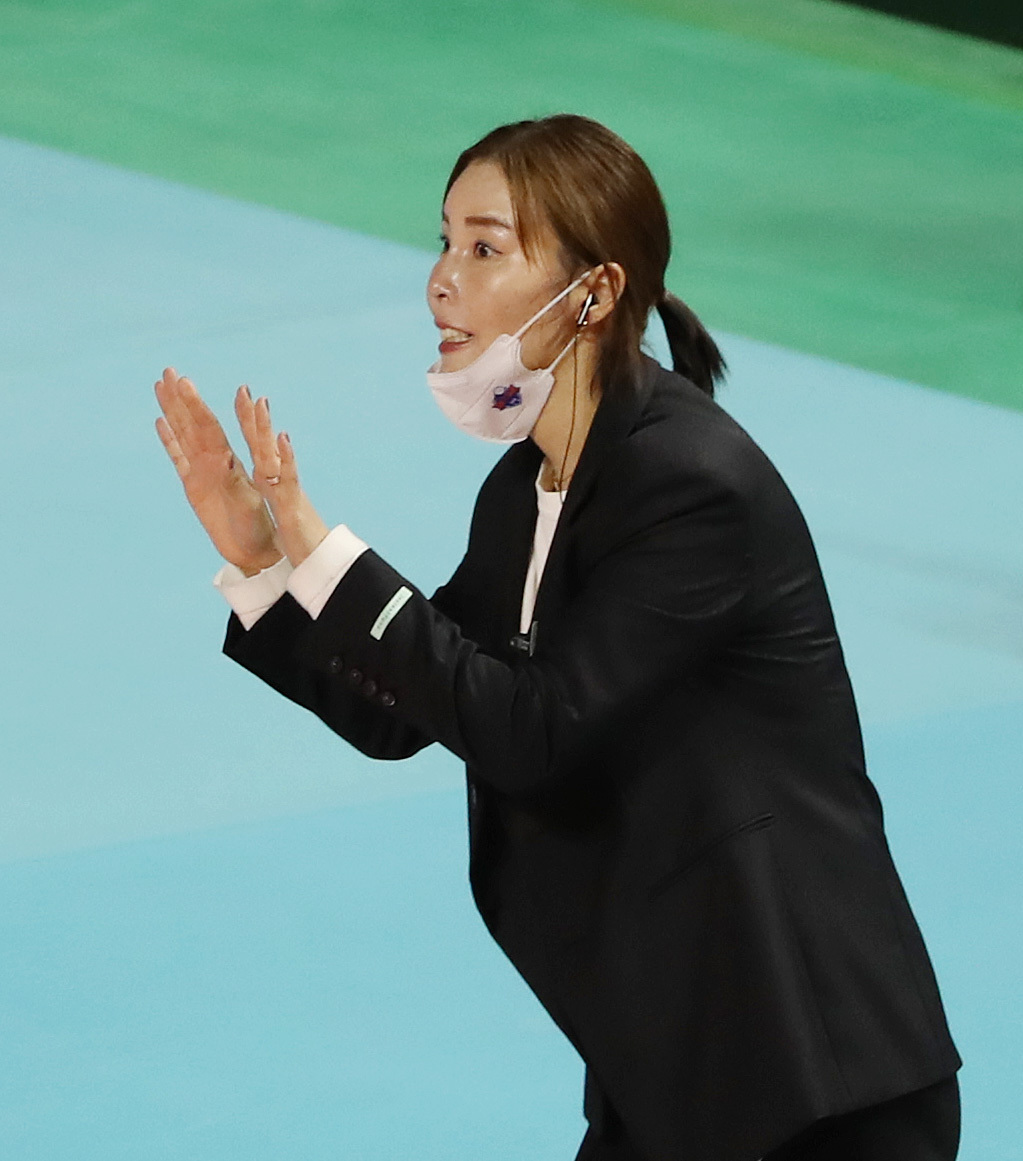 Acting coach Kim Sa-ni of the Hwaseong IBK Altos instructs players in a game against the Incheon Heungkuk Life Pink Spiders in Incheon on Nov. 23. / Yonhap
Drama at the Hwaseong IBK Altos of the Korean women’s volleyball V-League appears to be nearing an end, as the team confirmed Tuesday a plan to appoint a new head coach as soon as possible, which would end Kim Sa-ni’s brief but turbulent tenure as acting coach.

It was unclear as of Wednesday whether this would mean Kim’s return to the previous post as assistant coach.

A former star player of the Altos and member of coaching staff since May 2020, Kim has been at the center of a bitter feud, which has been described by local media as a “rebellion” by Kim, then assistant coach, and team captain Cho Song-hwa, against head coach Seo Nam-soo.

In a hurried attempt to close the rift, the Altos on Nov. 22 fired head coach Seo and named Kim acting head coach. A victory for Kim, it seemed.

Then, in Saturday’s game, coach Cha Sang-hyun of GS Caltex Seoul Kixx, playing opposite the Altos, publicly displayed his disapproval of Kim by refusing to shake hands.

“As part of the volleyball community, I have much I want to say, but won’t,” Cha said to reporters afterward.

At least two more head coaches of other volleyball teams said they would join Cha’s protest and not shake hands with Kim.

As for what exactly happened inside the Altos, details seem to be sketchy. But it looks like the local volleyball community -- from former players and coaches to fans -- are more sympathetic toward the sacked coach.

Local media’s choice of the words “rebellion” and “insubordination” to describe the chain of events that led to his ouster also suggest a less favorable view of the actions of the then-assistant coach and team caption.

From star player vs. coach to assistant coach vs. head coach

Whatever was going on internally with the team was brought into the public eye when the captain boycotted a game on Nov. 16. It was revealed she had not joined the team’s practice sessions in days.

Kim, then assistant coach, threw her weight behind Cho by boycotting the team’s schedule on Nov. 18. It was just the second time in Korean professional sports history that a coach had done so, the only other case being in baseball in 1982.

Kim returned and held an interview on Nov. 19 in which she denied any clash between the coaching staff and athletes. Two days later, the team fired the head coach, along with the team’s general manager, and named Kim the acting coach.

In another press conference on Nov. 23, Kim claimed it was the ousted chief who told her to leave and take responsibility for everything that happened, and that insults and harsh words had been used against her.

Former head coach Seo denied accusations of verbal abuse. He claimed he told Kim to “stop acting like a player.”

Cho has yet to publicly comment on the issue. On YouTube, critics of Cho have shared clips from past games that they claim show Cho’s disrespectful attitude toward Seo.

On the verbal abuse accusations, Altos management said it could not conclusively say whether or not there had been an insulting exchange of words.

Feuds between a coach and a player is nothing new in sports. In 2011, basketball hall of famer Jerry Sloan’s 23-year tenure as head coach of NBA’s Utah Jazz abruptly ended after conflicts with Deron Williams. Both parties denied that Williams was behind Sloan’s ouster, but it is still seen as a classic coach vs. superstar case.

Such conflicts are frowned upon in sports, but it has an added meaning in Korean sports where the coach-player relationship is likened to that of teacher and pupil.

Former basketball player and YouTuber Ha Seung-jin met with his former coach Hur Jae in 2020, a year after his retirement, in which Hur encouraged him to call him “hyung,” or brother, a term of lesser formality used between friends. Ha refused to do so, saying that he is thankful but did not want to “remove the wall” of respect between them as teacher and pupil.

On Teachers’ Day, teams in the Korean Baseball Organization hold events each year across the league in which players give their “teachers” -- the coaches -- presents and even sing congratulatory songs. When the English Premier League’s Tottenham Hotspur changed coaches, Korean media used the headline “Son Heung-min got a new teacher.”

Some coaches do not share the sentiment. Kim Eung-yong, the winningest coach in Korean baseball history with 10 championships, voiced his objections when he was coaching the Hanwha Eagles a few years ago.

“We’re all pros, what’s the gift for? We all play baseball under contract with the team. If you’re going to give a present to anyone, give it to your school teachers,” he said, refusing a gift from the team’s captain Ko Dong-jin.

But in such a culture, players who defy coaches had better have good reasons for doing so, else they will be criticized for being disrespectful.

This is partly why the local volleyball community has reacted particularly strongly to the way the Altos saga has resulted in the firing of a head coach who wasn’t obviously at fault.

Retired men’s volleyball superstar Kim Yo-han lambasted Cho, the team captain who protested against the coach, with strong words on a podcast appearance, saying she was “not on the level to act like that.”

“The coach is the team’s leader. Such attitude is unheard of. It makes no sense,” he said. “Even if the coach is making you uncomfortable, the players are supposed to listen.”

A former coach of the Altos said in an interview with local media that the players are “trying to ruin Seo’s career” and that no coach will ever want to take the job now.

Coach Hu In-jeong of the Uijeongbu KB Insurance Stars said Sunday he thought some players in the league were not acting properly, despite being paid high salaries, although he stopped short of naming names.

Kim Yeon-koung, arguably the biggest volleyball star in Korean history, did not come to the defense of Kim Sa-ni, one of her best friends and the acting coach who sided with the team captain in protest against the head coach.

“It’s time for all of us to change,” she simply said on social media.