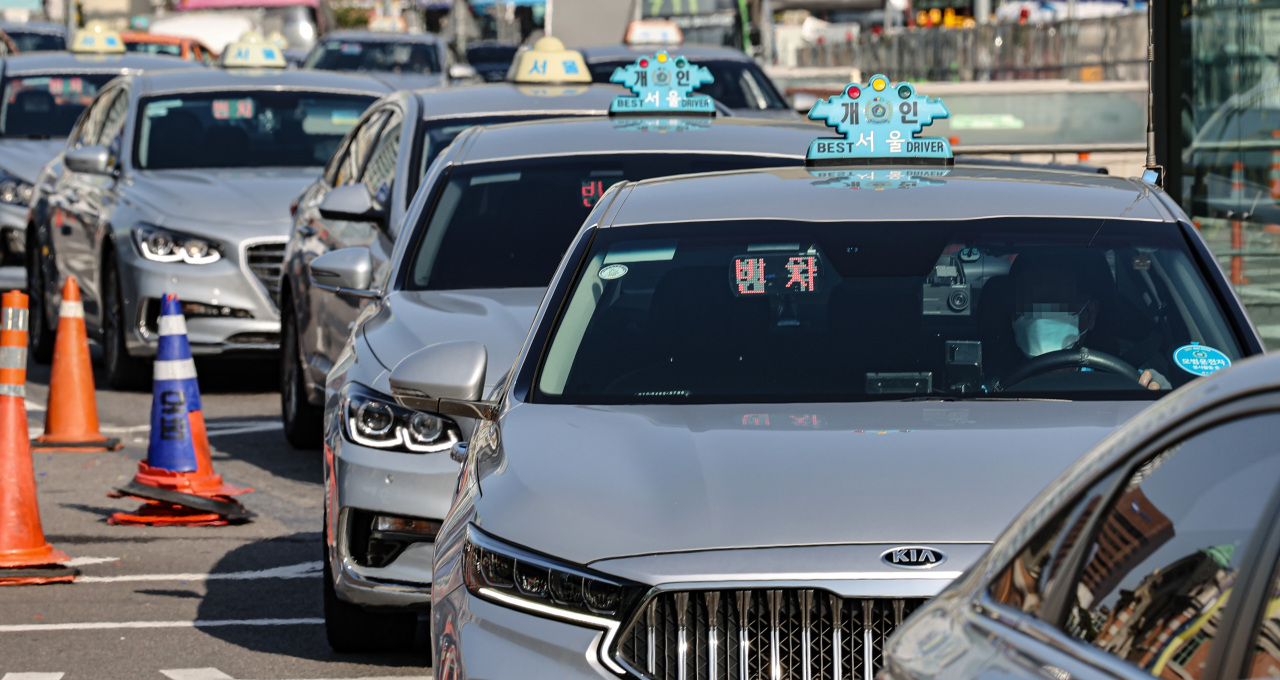 Taxis wait for passengers outside Seoul Station on Nov. 16. (Yonhap)
As the “living with COVID-19” strategy has opened up the economy, more people are now heading back to restaurants, bars and clubs. But while the streets are bustling and lively again, hailing a taxi at night has become a headache.

Lim Bong-gyun, secretary-general of the Federation of Korean Taxi Workers, said many drivers employed by public hire taxi operators quit during the pandemic as they felt that continuing to work in the industry would mean working at a loss.

“When there were fewer customers, company-hired drivers still had to pay a fee out of their earnings to their operators,” Lim said.

While private taxi drivers keep all the fares they collect, drivers of corporate-owned taxis have a unique pay system. While they have a very low basic salary, they get to keep fares collected after they pay a certain amount to the company. This type of contract remains widespread despite being declared illegal last year, according to industry sources.

Lee Young-sik, an owner-driver of a public hire taxi in Seoul, agrees that working as a corporate-owned taxi driver is “not a stable job.” On a bad day, you could be driving for hours but not earning much.

“Many drivers used to work only late at night pre-pandemic, especially young people. But as the COVID-19 situation worsened, these workers pivoted to delivering food or parcels, which explains why there are not enough taxis running at night at the moment,” Lee said. “It is getting better, though, thanks to ‘living with COVID-19.’”

Taxi shortages have emerged as an issue in other countries too. Many drivers in the UK left the industry as demand plummeted during lockdowns, and the decline in numbers is causing safety concerns, the BBC reported earlier this month.

Amid the pandemic, the number of company-run taxis in the South Korean capital plunged by 30 percent, down from 30,527 in 2019 to 20,955 as of October this year, according to data from the Seoul Metropolitan Government.

Despite the drop in the taxi driver population, demand for taxi rides has soared in recent weeks.

A record-breaking 3.84 million taxis were requested on the app on Nov. 6, according to Kakao Mobility, the operator of the country’s leading taxi-hailing service, Kakao T.

Between 10 p.m. and 2 a.m. during the first two weeks after the government eased antivirus restrictions early this month, the number of calls increased by a daily average of 86 percent compared with the last two weeks of October.

The Seoul Metropolitan Government said taxi demand nearly doubled between 11 p.m. and 4 a.m. during the first week of November compared with last month.

Against this backdrop, the authorities in Seoul decided to temporarily lift a rule requiring private taxi drivers to take a day off after working for two days.

“The rule is to prevent overwork and ensure vehicles are looked after and drivers are well rested. The lifting of the rule comes as demand suddenly surpassed supply due to year-end gatherings and the living with COVID-19 scheme,” a Seoul city official said.

To tackle the supply and demand imbalance during peak hours, incentives should be provided for drivers working late at night, one representative of Kakao Mobility said.

“It is crucial to ensure that taxi drivers are motivated to work late at night and in the early hours, when demand soars. Measures such as incentives should be given so more drivers are voluntarily in operation,” the official said.

The company said its premium “rejection-free” service Kakao T Blue has eased the taxi shortage. Kakao T Blue taxis are automatically dispatched without drivers knowing the destination to prevent them from refusing to make short-distance trips.

Lim from the taxi workers’ federation said that although it was a temporary fix, it would help if taxi drivers were barred from choosing which passengers to take depending on their destination.

But others say the taxi shortage is not limited to pandemic times and only a fundamental change can tackle the issue in an industry with an aging workforce. Over 80 percent of drivers are aged 50 and older, according to 2020 data from the Korea Transportation Safety Authority.

“Even without regulations, not many drivers are willing to take on passengers, and measures need to be taken to change the situation,” said Ki Woo-seok, a director at the Korean Taxi Workers’ Union.

In Seoul, taxis operating late into the night between midnight and 4 a.m. in the morning receive a premium of 20 percent -- the basic fare starts at 4,600 won and after 2 kilometers, it is 120 won every 132 meters. But the uptick in fares falls short of expectations.

“In an industry with an aging workforce, the salary and profit is not enough to compensate for how stressful picking up intoxicated passengers late at night can be,” he said.