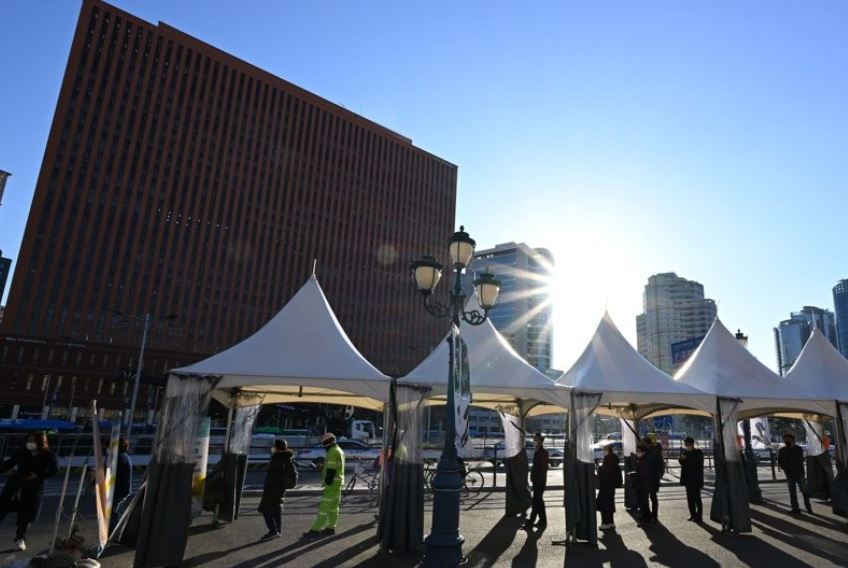 People wait in line to get COVID-19 tests at a virus testing site near Seoul Station in central Seoul on Nov. 26, 2021. (Yonhap)

South Korea's new coronavirus cases rose above 4,000 with the numbers of deaths and critically ill patients hitting fresh record highs Saturday, deepening worries about the further spread of COVID-19 under a phased scheme for a gradual return to normal life.

The country reported 4,068 new COVID-19 cases, including 4,045 local infections, raising the total caseload to 436,968, according to the Korea Disease Control and Prevention Agency.

The number was up 167 from 3,901 on Friday but down from 4,115 on Wednesday, which was the highest since the first case was reported in South Korea in January 2020.

Critically ill patients hit an all-time high of 634, up 17 from the previous day. The country added 52 more deaths from COVID-19, bringing the death toll to 3,492. The fatality rate stood at 0.8 percent.

Of the locally transmitted cases, Seoul, the surrounding Gyeonggi Province and the western port city of Incheon reported 1,881, 1,105 and 287 infections, respectively.

The number of cases from overseas came to 23.

Concerns about an upsurge in new cases have been growing since the country began easing virus restrictions early this month under the three-phase "living with COVID-19" scheme.

South Korea planned to move to the second, more eased stage in mid-December, but health authorities have warned the country may not be able to do so if the current trend continues.

The government said it will announce toughened antivirus measures to contain the spread of the virus Monday. (Yonhap)