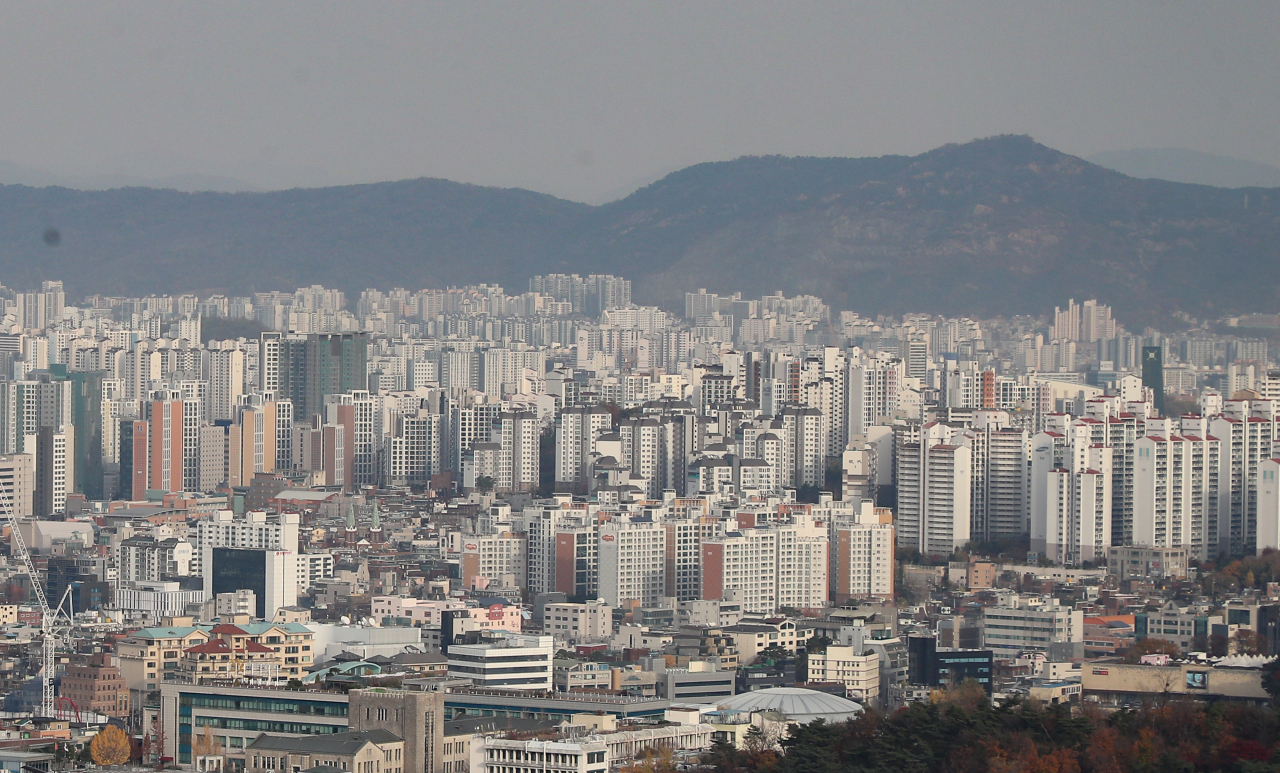 This file photo, last Monday, shows apartments in Seoul. (Yonhap)
The number of people who are subject to the so-called comprehensive real estate tax rose 42 percent this year from the previous year amid skyrocketing home prices and hikes in the tax rates, the finance ministry said Monday.

A total of 947,000 people are subject to the comprehensive real estate taxes this year, compared with the 667,000 people tallied for last year, according to the ministry.

The 2021 numbers accounted for 1.8 percent of the country's 52 million population.

Such people are forecast to pay a combined 5.7 trillion won ($4.8 billion) in taxes this year, more than tripling from 1.8 trillion won for last year.

The comprehensive real estate tax scheme was introduced in 2005 in a bid to curb speculative purchase of properties, often called "taxes on the rich."

The tax is levied on owners who have multiple homes with their combined state-assessed price value exceeding 600 million won. For owners of one home, the taxation base was raised to 1.1 billion won from the previous 900 million won.

Higher tax bills come as housing prices have skyrocketed despite the government's measures to cool down the property market.

The government said its actual tax revenue from such taxes is forecast to reach 5.1 trillion won.

South Korea has unleashed a series of measures to curb highflying home prices, including tax hikes and lending regulations. But the measures have led to only a short-term letting up as more people have taken out bank loans to buy homes in anticipation of higher prices.

In South Korea, the government taxes land and homes based on its annual assessment value instead of the actual market value.

The average government-assessed housing prices rose 19.08 percent across the nation this year, the sharpest on-year gain in 14 years. The government plans to raise state-evaluated prices for all types of real estate, including apartments and land, to up to 90 percent of their market prices in the next 10-15 years.

The government also sharply hiked the comprehensive real estate tax rate on owners of two or three homes in some speculative areas.

Public discontent over the government's housing policy has increased as runaway home prices drove up tax burdens on home owners and raised costs for people who seek to rent or buy homes. (Yonhap)