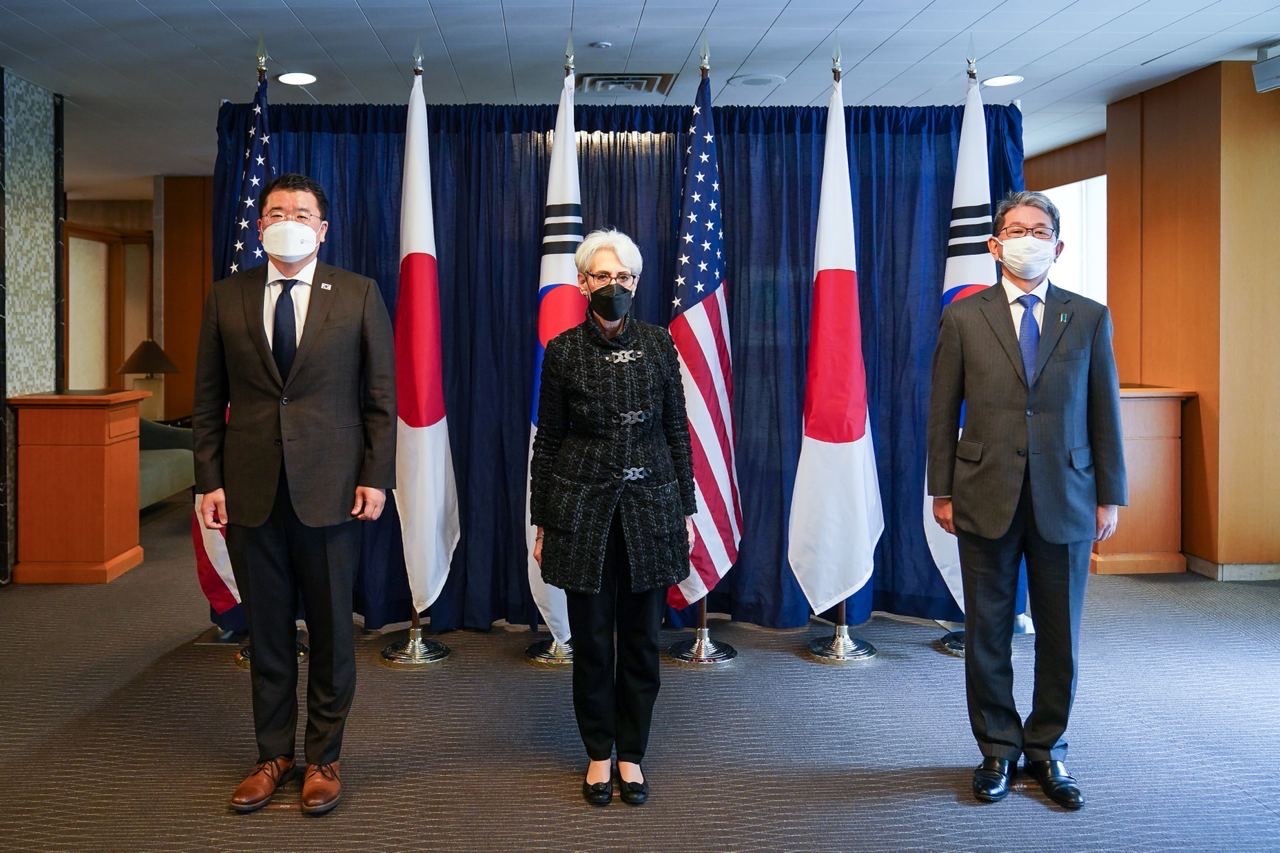 Mori and South Korea’s First Vice Foreign Minister Choi Jong-kun were scheduled to appear alongside US Deputy Secretary of State Wendy Sherman at a press conference scheduled after the three held talks over regional issues, including North Korea’s nuclear program, in Washington on Wednesday.

But Sherman was by herself to take questions from reporters, saying there were some “bilateral differences” between Seoul and Tokyo, “that were continuing to be resolved” and “unrelated” to the earlier three-way meeting.

“Japan has conveyed (to us) that it cannot attend the conference, as they took issue with South Korea’s head of police visiting Dokdo,” Choi told reporters in Washington. “So we agreed that the US, the host of the trilateral talks, would hold a solo news conference to announce the outcome of the Korea-US-Japan vice ministerial talks because we recognized their importance.”

Japan’s Chief Cabinet Secretary Hirokazu Matsuno said Thursday that the government decided it was “inappropriate” to hold a joint conference amid the ongoing dispute over the islet.

The long-running row over who rightfully controls Dokdo, which is known as Takeshima in Japan, escalated again after Kim Chang-yong, commissioner general of South Korea’s National Police Agency, visited the islets on Wednesday to encourage officials working in the area. It marked the first time in 12 years that the incumbent police chief had visited the easternmost islands, which Japan has persistently laid claim to but South Korea has been in effective control of since 1954.

Japan immediately lodged a protest with the South Korean government, stressing the islets are an “inherent part” of Japanese territory.

The Dokdo spat continued during the bilateral talks between Choi and Mori, which was held after their three-way talks. Their meeting marked the first in-person high-level talks between the squabbling neighbors since Japan’s new prime minister, Fumio Kishida, took office last month.

The Foreign Ministry here said the Japanese diplomat mentioned the Dokdo issue during the talks and Choi, in response, said South Korea could not accept any kind of Japanese claim over the islets.

Besides Dokdo, the two discussed key historical issues that have been at the center of their bilateral feud, but appeared to have failed to narrow the gaps.

During their meeting, Choi explained South Korea’s position on the historical issues, including forced labor and wartime sex slaves, and called for bilateral consultations to resolve the matter. He also explained Seoul’s position on Tokyo’s decision to discharge radioactive wastewater from the stricken Fukushima nuclear plant into the sea, and Japan’s export curbs.

In turn, Mori explained Japan’s position on the matter.

Seoul-Tokyo relations have been at their lowest ebb in recent years, due to historic disputes rooted in Japan’s 1910-45 colonial rule of the Korean Peninsula that have morphed into an ongoing economic feud.

The flare-up of tension between the neighbors alarms the US, which is pushing for strengthening three-way cooperation with its key Asian allies against China’s growing assertiveness and the nuclear-armed North Korea.

Despite the apparent clash, Sherman said the earlier three-way meeting was “friendly, constructive, substantive” and lasted more than three hours.

Sherman said the US was “very satisfied” with the consultations with South Korea and Japan on the best way to ensure the complete denuclearization of the Korean Peninsula.

But she declined to comment directly on whether the US supports Seoul’s proposal to formally end the 1950-53 Korean War, and said the US and its allies “are having good consultations” and will continue to do so.

Upon his arrival in Washington on Sunday, Choi said he expected a “good result” soon in the Seoul-Washington discussions on the end-of-war declaration, indicating there could be some progress toward an agreement.

Choi told reporters after the meeting that the Seoul government, too, is satisfied with the “speed and direction” of the ongoing talks on the end-of-war declaration.