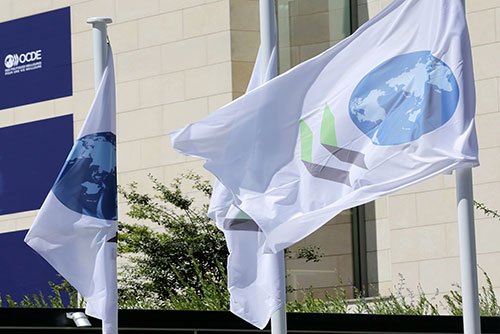 According to the organization, Korea posted 31.5 percent in the gender wage gap last year. This means that women earned 31.5 percent less than men on average, a gap that is likely to surpass those of other members, based on previous years’ data. 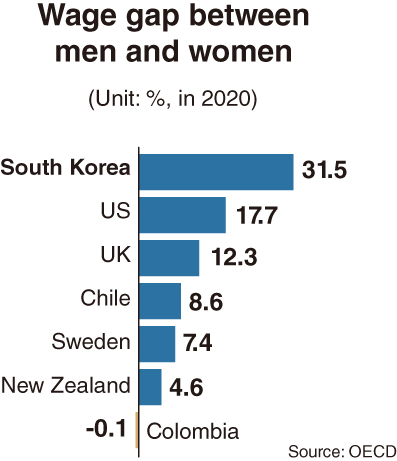 (Graphic by Kim Sun-young/The Korea Herald)
As a noteworthy case, Colombia posted minus 0.1 percent in the gender wage gap last year, which indicates that female workers earned more than their male counterparts.

Luxembourg, on the basis of its latest 2018 figure, the gender wage gap stood at minus 3.1 percent. The 2019 figure for Costa Rica was 0.0 percent, which means the pay for men and women were the same.

Only four, including Korea, of the 38 members have been posting more than 20 percent in recent years, and Korea is the only member with a figure exceeding 30 percent.

As of 2019, the OECD average and the average of the 27-member European Union stayed at 12.5 percent and 11.2 percent, respectively. Korea has secured the top position since the organization started compiling the relevant data in 1995.

“The wide disparity in 1995 -- 44.2 percent in Korea vs. 18.9 percent in OECD -- has somewhat narrowed over the past two decades. But the level in the nation is still critical compared to global standards,” a labor market researcher in Seoul said.

A research fellow from the Korea Employment Information Service was quoted by a media outlet as saying that “there is a high possibility that many women -- after marriage and giving birth -- reenter the job market in an underemployment status (for example, as nonregular employees) due to suspension of their career for years. Further, the reentering itself is difficult in Korea.”

Some online commenters argue that the sexual discrimination in payment still exists in many local businesses.

They highlight the data held by Statistics Korea, in which the portion of nonregular workers, which came to 47.4 percent -- an all-time high -- of all female workers as of 2020, while the figure for men stood at 31 percent.

But some others push back against these arguments. They say that a dominant portion of the employed in physically risky and demanding sectors, such as construction and heavy industry, are men. They also claim that men usually take on more physically demanding and overnight duties than women in ordinary workplaces.