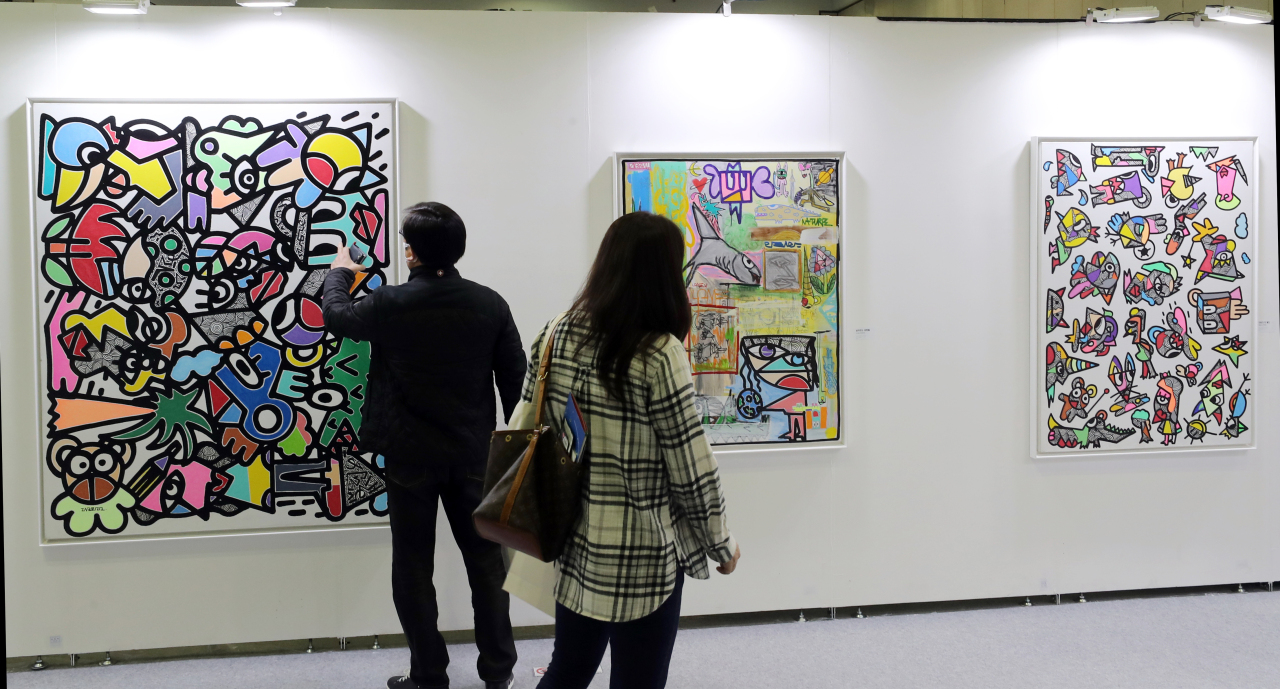 People look at art pieces displayed at NFT Busan on Thursday. (Yonhap)
Nonfungible tokens, otherwise known as NFTs, are more disruptive than cryptocurrencies because of its potential to be applied to a plethora of sectors, blockchain experts said last week.

“At the moment, the cryptocurrency market, which is a fungible market, outscales the NFT market, but the cryptocurrency market still falls within the realm of conventional finance. On the other hand, NFTs present an unlimited potential to expand beyond existing conceptions of financial assets,” Kim Won-sang of Ground X, Kakao Corp.’s blockchain arm, said during a speech at NFT Busan.

Kim noted that “digital banks, regardless of the efforts they make, are still just banks. The financial industry will remain limited, unless these banks can find a way of not only having a slice of the pie, but rather making the whole pie bigger.”

NFTs, which are part of digital assets like cryptocurrencies, are digital ownership records of items that are counterparts to real real-world assets or digital items. More importantly, each NFT is unique, with ownership being traced and protected through blockchain technology.

In the third quarter this year, sales of NFTs reached $10.7 billion, soaring from $1.3 billion in the previous quarter, according to data from market tracker DappRadar.

Kim’s view was echoed by officials from financial companies at the conference.

“NFT allows to value to be awarded to creators who create something out of nothing. This means these kinds of value creation are applicable to infinite fields and therefore endless development,” Lee said. “In the financial market, we can expect something like ‘NFT Securities’ which can award membership as well as shareholder rights together.”

While industry experts see NFTs as a game changer for the future industry, it will also change how people can make a living.

“Anything you do -- be it dancing, drawing, singing -- could be digital assets in the form of NFTs and can be evaluated in the market. This provides a platform especially for the young generation to earn money without ever having to work for a company,” In Hoh, a computer science professor at Korea University, said in his speech titled “Digital Assets and the Future of Wealth.”

With respect to the financial industry’s prospect in the recent future, Lee of Mirae Asset, added that many institutional investors will likely jump into the digital asset markets, which in turn will prompt the creation of further blockchain services to support the increased demand of these new institutional investors.

“We are not just talking about institutional investors buying bitcoin as part of their own portfolios, but rather the purchasing of cryptocurrencies and other digital assets as part of client portfolios as well,” he noted.

Shinhan Bank’s Yoon Ha-ri, a manager at the bank’s Blockchain & TechBiz Cell, said that banks are also actively seeking ways to make a foray into the emerging market. “Banks used to have negative opinions on the digital asset market but the market has become ‘too big to ignore’ and more importantly customers want it.”

He also indicated that more countries -- especially those with unstable financial systems -- will move to adopt cryptocurrency as legal tender, just as El Salvador did earlier this year.

The three-day event also included two separate auctions that featured art pieces and an NFT of Hunminjeongeum, a document describing an entirely new and native script for the Korean language.