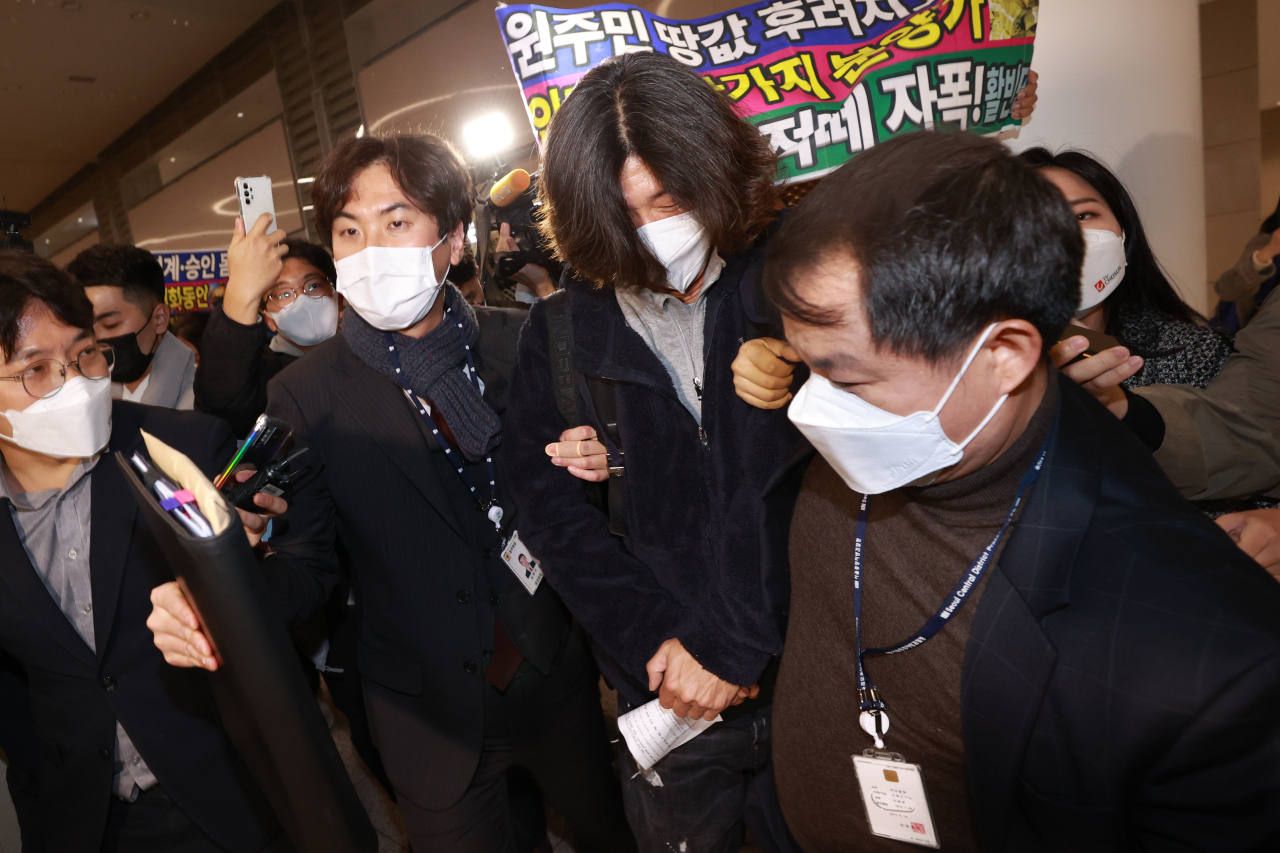 Nam Wook (C), a key figure in a sprawling land development scandal in Seongnam, Gyeonggi Province, is swarmed by reporters at Incheon International Airport, west of Seoul, on Monday, after returning from Los Angeles to be questioned by prosecutors on his suspected role in lobbying influential figures over the course of pushing for the project. (Yonhap)
Prosecutors released a key partner involved in a corruption-laden urban development scandal early Wednesday after questioning him for two days, belying widespread expectations they would seek an arrest warrant for him.

Nam Wook, a lawyer, was freed shortly after midnight from emergency arrest he had been under since his arrival at Incheon International Airport from the United States early Monday for questioning over bribery and other allegations.

Prosecutors had widely been expected to seek a formal arrest warrant for him before the emergency arrest expired Wednesday morning, but a prosecution source said he was released because the investigation is still "incomplete."

The official said they will decide whether to seek a warrant for him again "after further investigations."

Nam is believed to be holding a key to resolving suspicions over how a previously unheard-of asset management firm, Hwacheon Daeyu, and its seven affiliates reaped astronomical profits from a 2015 project to develop the Daejang-dong district in Seongnam, south of Seoul, into an apartment complex.

Private partners of the project, including Nam who owns one of Hwacheon Daeyu's seven affiliates, were accused of colluding with Yoo Dong-gyu, former acting president of Seongnam Development Corp., to have the asset firm take part in the lucrative project.

Yoo is widely regarded as an associate of Gyeonggi Province Gov. Lee Jae-myung, who is now the ruling Democratic Party's candidate for next year's presidential election. Lee was the mayor of Seongnam when the development project was launched.

Yoo has already been arrested on charges of bribe-taking and breach of trust.

The scandal is rocking South Korean politics and remains a source of a political firestorm for Lee's presidential campaign. (Yonhap)