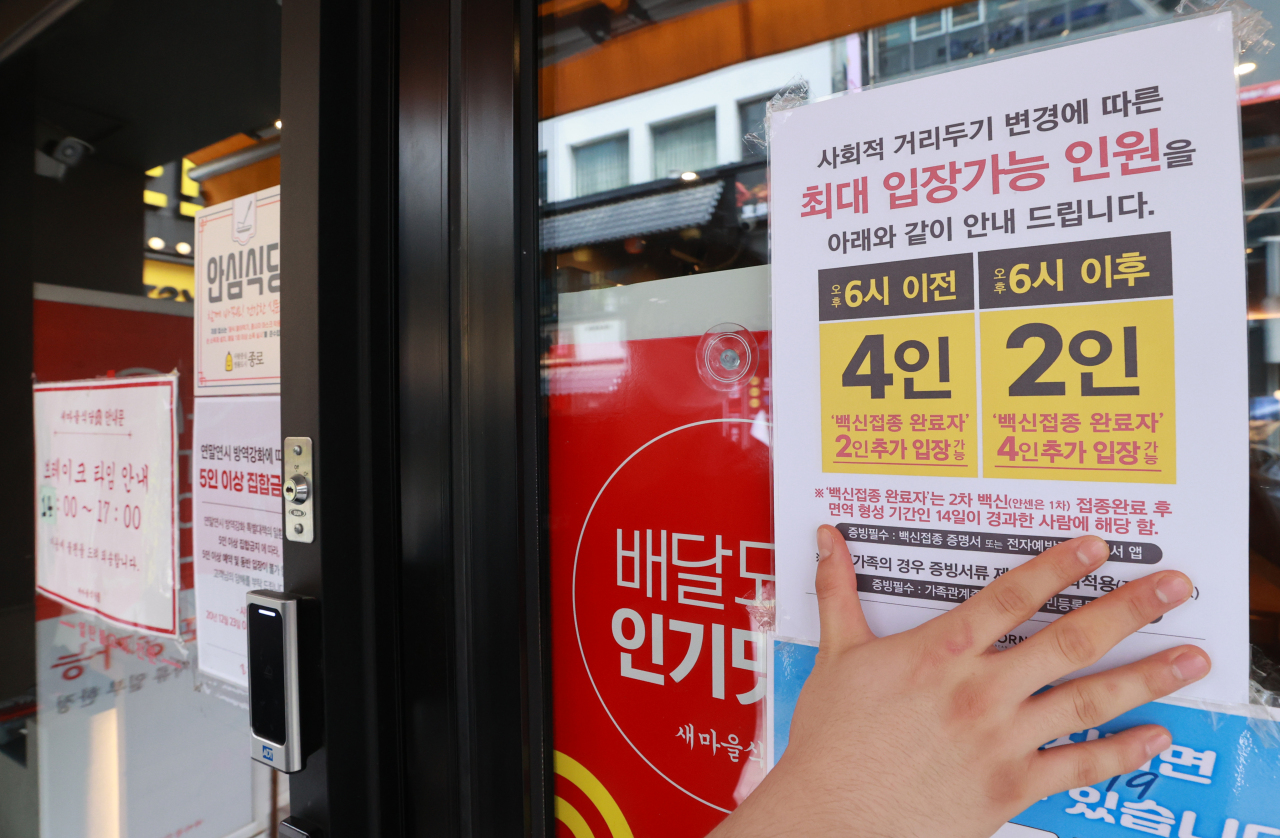 This photo taken on Sunday, shows a worker attaching a notice on the revised social distancing rules on the window of a restaurant in Seoul. (Yonhap)
South Korea's daily new COVID-19 cases fell to the 1,400s on Sunday, as health authorities plan to apply eased distancing rules for a gradual return to normal life.

The country added 1,420 more COVID-19 cases, including 1,403 local infections, raising the total caseload to 342,396, according to the Korea Disease Control and Prevention Agency (KDCA).

The latest tally fell from 1,618 cases reported on Saturday, and 1,684 on Friday and 1,940 on Thursday. The daily infection count has stayed in the quadruple digits since July 7 and in the 1,000s for nine consecutive days.

On Friday, the government announced a set of eased social distancing rules as South Korea prepares for a "living with COVID-19" scheme next month, in which the virus will be treated as an infectious respiratory disease, like seasonal influenza.

Under the renewed plan that will take effect Monday, the greater Seoul area -- home to half of the country's population of 52 million -- will remain under the toughest social distancing of Level 4, while the rest of the country will be under Level 3.

Still, the government will allow social gatherings of up to eight people, up from the current cap of six, in the greater Seoul area after 6 p.m. if four of them are fully vaccinated. The relaxed curb will be applied to all multiuse facilities, including cafes and restaurants.

A maximum of 10 people, including six fully vaccinated people, will be allowed in other regions.

The KDCA said 40.39 million people, or 78.7 percent of the country's population, have received their first shots of COVID-19 vaccines and the number of fully vaccinated people stands at 33.17 million, or 64.6 percent.

The number of new imported cases came to 17.

The number of patients with serious symptoms across the country reached 348, down from 361 a day earlier, the KDCA said.

The total number of people released from quarantine after making full recoveries came to 310,344, up 2,157 from a day earlier. (Yonhap)