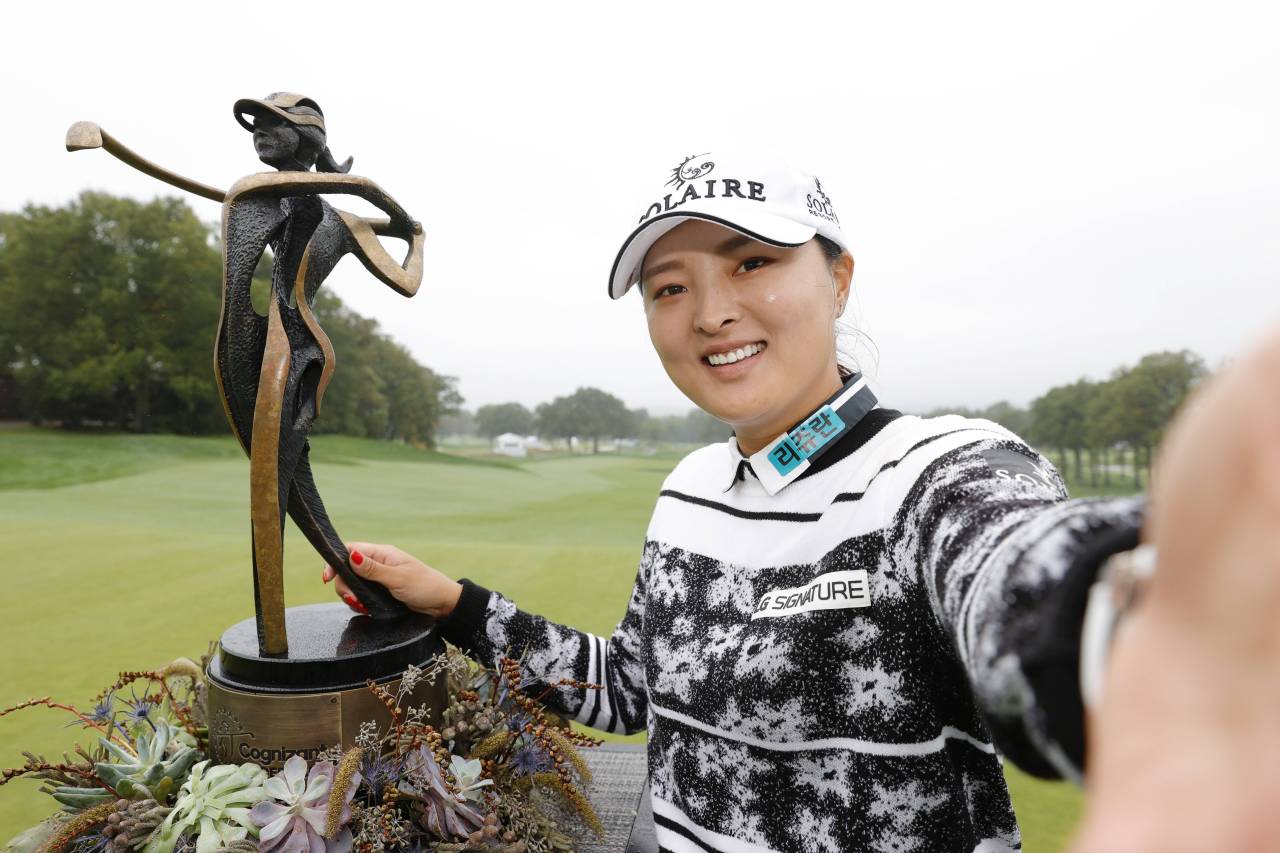 In this Getty Images photo, Ko Jin-young of South Korea imitates taking a selfie with the champion's trophy after winning the Cognizant Founders Cup at Mountain Ridge Country Club in West Caldwell, New Jersey, on Sunday. (Getty Images)
World No. 2 Ko Jin-young has found the LPGA winner's circle for the third time in 2021, while also tying a scoring record held by a legend and making a late-season push for the Player of the Year award.

This was Ko's 14th consecutive round in the 60s, which ties the mark that Annika Sorenstam set during her 10-win season in 2005.

Ko has joined Nelly Korda of the United States as the only three-time winners this season. Ko also moved into second place behind Korda in the Player of the Year points race.

Korda, who finished tied for 19th in this tournament, leads the way with 161 points and Ko now has 146 points. Players earn points based on top-10 finishes, with each victory worth 30 points and runner-up finishes good for 12 points, and so forth. There are three tournaments left in 2021, including Ko's next tournament, the BMW Ladies Championship in the southern South Korean city of Busan starting Oct. 21.

Korda will not travel to South Korea, and that will give Ko an excellent chance to move ahead of the American while playing on home soil. The tour will then wrap up the season with two events in Florida.

Ko has been the hottest player in the second half of the season. All three of her victories have come in her past six starts, a span that also includes a runner-up finish and a sixth-place showing.

Ko entered the final round at 13-under, four ahead of four players. She dropped in two birdies on the front nine, and then picked up four more in a five-hole stretch beginning at the 12th.

Her lone blemish of the round was a bogey at the 17th.

Masson began the day six shots back of Ko, and her bogey-free round of 64 wasn't enough.

Ko had also won the Founders Cup the previous time it was played in 2019. The tournament was canceled last year during the COVID-19 pandemic. On its return to schedule, Cognizant became the new sponsor and doubled the prize money.

With $3 million in total purse, it is the most lucrative regular tournament this season, outside the five majors and the season-ending CME Group Tour Championship. Ko earned $450,000. (Yonhap)