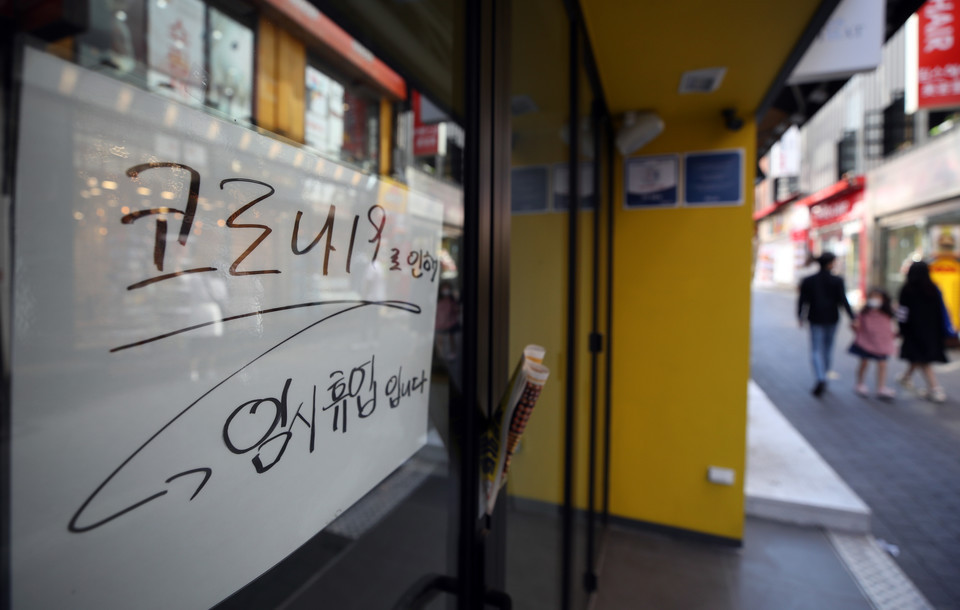 A sign shows the temporary closure of a store in Seoul’s shopping district of Myeong-dong due to the coronavirus pandemic. (Yonhap)

The balance of personal credit loans at the nation’s 20 leading private lenders, including Apro Financial, Sanwa Loan and Welcome Creditline, stood at 4.41 trillion won ($3.35 billion), as of the end of June. Among the loans, those with an interest rate exceeding 20 percent amounted to 4.18 trillion won, accounting for 94.8 percent of the total, according to Rep. Jeon Jae-soo of the ruling Democratic Party of Korea, quoting the Financial Supervisory Service’s data.

However, as the lowered legal lending cap only applies to new loans or those whose contracts are renewed, small business operators and beleaguered families, who are also those most affected by surges in COVID-19 cases, are still struggling with debt-servicing burdens due to sky-high interest rates.

The lawmaker urged private lenders to take voluntary measures to adjust interest rates for debtors not subject to July’s maximum lending rate cut, adding that financial authorities should prepare follow-up measures to prevent any fallout from the lending rate cut on low-credit borrowers.

Meanwhile, a growing number of debtors, especially small merchants, have rushed to private lenders to borrow money and make ends meet.
The credit loan balance at nonbanking institutions soared by 24.4 percent in the first quarter to reach 281.2 trillion won at the end of March, with private lenders holding a combined 21.9 trillion, up 71.8 percent from a year earlier, according to data from the Bank of Korea.