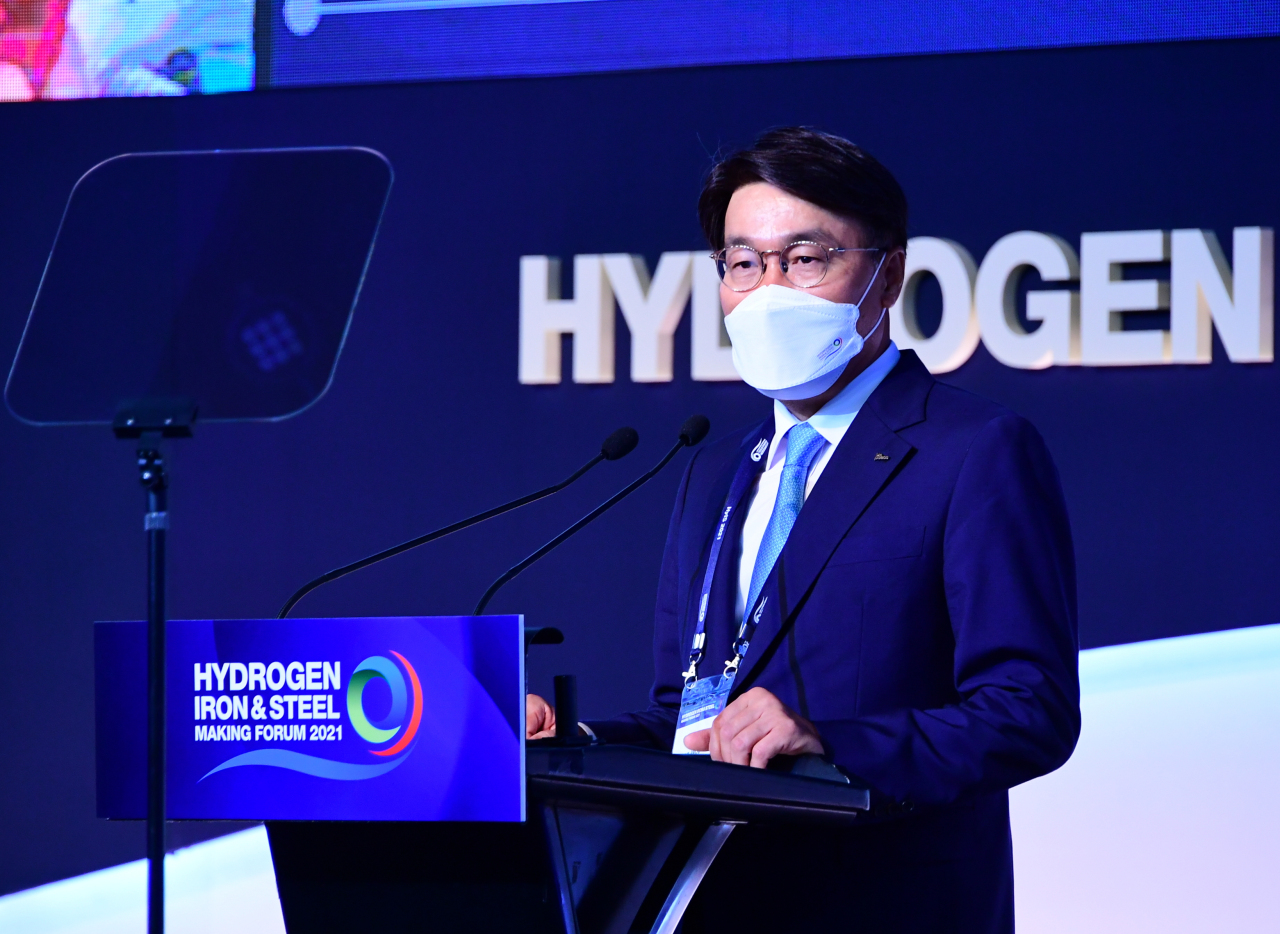 Posco Chairman Choi Jeong-woo speaks at the Hydrogen Iron & Steel Making Forum 2021 in Seoul on Wednesday. (Posco)
To respond to the growing pressure to meet net-zero pledges, steelmakers around the world must work together to find ways to decarbonize steelmaking, mostly likely with the use of hydrogen, the chief of South Korea’s top steel manufacturer said Wednesday.

Hosting the Hydrogen Iron & Steel Making Forum 2021, the world’s first international forum on hydrogen steelmaking, Posco Chairman Choi Jeong-woo highlighted the need for urgent, concerted action as an industry and an open platform to share and spread each player’s progress along the way.

“As an industry, substantial time and cost is required to attain our net-zero goals. No one nation or business can do this alone,” Choi said. “Exchange and cooperation will accelerate progress and take all of us to our goals a lot faster,” Choi said, asking for commitment not only from steel companies, but also from the government.

The hydrogen forum, which runs until Friday, is held in Seoul, and is also streamed live online. About 1,200 participants from major global steelmakers, material suppliers and energy organizations from 49 countries were to attend the event, according to Posco.

“Korea, whose steel industry accounts for a large part of its economy will act first and join the world in accomplishing the mission,” Moon said in a prerecorded video streamed at the forum.

For the goal of turning to a net-zero society by 2050, Moon said the country will work to close coal-fired power plants earlier than scheduled, and increase the proportion of renewable energy, while expanding the hydrogen economy.

“Moreover, with a view of turning to clean hydrogen, we intend to switch gray hydrogen to 100 percent blue and green hydrogen and significantly scale up the production of green hydrogen,” Moon added.

According to Posco, the volume of global steel production is about 1.9 billion metric tons, and accounts for about 8 percent of the world’s carbon dioxide emissions.

At the event, the company also introduced its own hydrogen-based steel manufacturing technology, dubbed HyRex.

HyRex uses fluidized reduction furnaces that uses hydrogen, instead of the existing blast furnaces operated by coal, said Lee Duk-rak, chief of Posco’s Institute of Technology, adding that they would not need sinter plants and coke plants in steel production.

Posco has already developed the fluidized reduction furnaces and has been using it in the fine iron ore reduction process to reduce coal usage, Lee said. With further technological development, Posco seeks to replace coal with hydrogen for the entire production process by adding electric furnace facilities.

Martin Pei, the chief technical officer from SSAB, a Sweden-based steel manufacturer, presented Hybrit, or Hydrogen Breakthrough Ironmaking Technology. It is working together with LKAB, an iron ore pellet producer and Vattenfall, a Swedish energy company, on the technology.