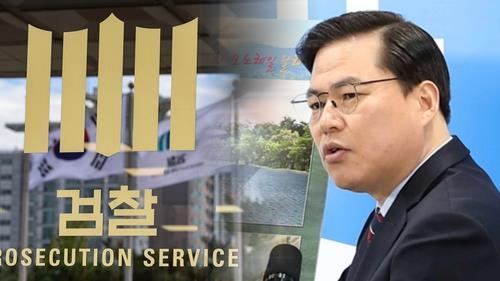 Yoo Dong-gyu, former acting president of Seongnam Development Corp., was apprehended by prosecutors at a hospital Friday morning and was taken to the Seoul Central District Prosecutors Office. He was asked to appear before prosecutors by 10 a.m. but requested that his appearance be delayed by several hours due to his alleged health problems, judicial officials said.

Yoo, reported by some media as having a close relationship with Lee, is said to have been deeply involved in a controversial land development project in Seongnam's Daejang district launched in 2015, when the governor was serving as the city's mayor.

In recent weeks, Lee has come under growing scrutiny over accusations he gave business favors to Hwacheon Daeyu Asset Management, the key investor in the Daejang district development project. The allegations pointed to a possible personal connection between Lee and the project, from which Hwacheon Daeyu, with a combined capital of 350 million won (US$297,063), reaped colossal gains of more than 400 billion won in dividends.

Yoo is suspected of playing a key role in designing the shareholder composition and profit distribution method of Seongnam Park Co., the main developer of the Daejang project, in a way that benefits Hwacheon Daeyu, one of the company's shareholders.

Media reports have also raised questions about the personal relationship between Lee and the owner of Haecheon Daeyu, Kim Man-bae, saying Kim, a former journalist, had previously interviewed Lee as the Seongnam mayor in 2014.

Yoo is also suspected of owning one of the investor companies in the Daejang project and receiving money from Hwacheon Daeyu. Yoo was appointed to head the Gyeonggi Tourism Organization after Lee was elected the province's governor, raising speculation that he was one of the governor's confidantes.

According to sources in the prosecution, an accountant and investor in the Daejang project has provided recordings that allegedly detail Yoo's demand of parts of Hwacheon Daeyu's dividends and discussions of potentially illicit money payments. They said the accountant named Jeong Young-hak, who owns an affiliate of Hwacheon Daeyu, submitted 19 recordings of conversations between Yoo and Kim. The recordings reportedly contain discussions on a suspicious expenditure of 8 billion won from the company's funds, among others.

Lee has denied all allegations, including reports of his close relationship with Yoo.

Yoo has also denied the allegations of receiving money from Hwacheon Daeyu.

Prosecutors, who raided Yoo's home and the office of Hwacheon Daeyu earlier this week, have been questioning ranking officials of Seongnam Development Corp., which has overseen the Daejang development project.

In a related development, police have banned Kim and seven other figures implicated in the scandal from leaving the country, the Gyeonggi Nambu Provincial Police Agency said.

The Gyeonggi police agency began its probe into the scandal Tuesday after taking over three separate police investigations regarding a suspicious money flow between Kim and Lee Seong-mun, criminal complaints filed by civic groups against key figures involved in the Daejang project and a controversial severance pay of 5 billion won paid by Hwacheon Daeyu to a son of independent lawmaker Kwak Sang-do.

The alleged money transaction between Kim and Lee Seong-mun was detected by the state-run Financial Intelligence Unit in April before being notified to police, though the two insist the money was a loan.

Kim had borrowed 47.3 billion won from his company until last year, according to the company's report to the financial market watchdog.

It was also recently revealed the son of Kwak, formerly affiliated with the main opposition People Power Party, received the excessive severance pay in January after some seven years of work as a mid-level employee at the company.

Police said they are investigating whether the figures slapped with an exit ban have inflicted any loss to their companies or embezzled corporate funds. (Yonhap)