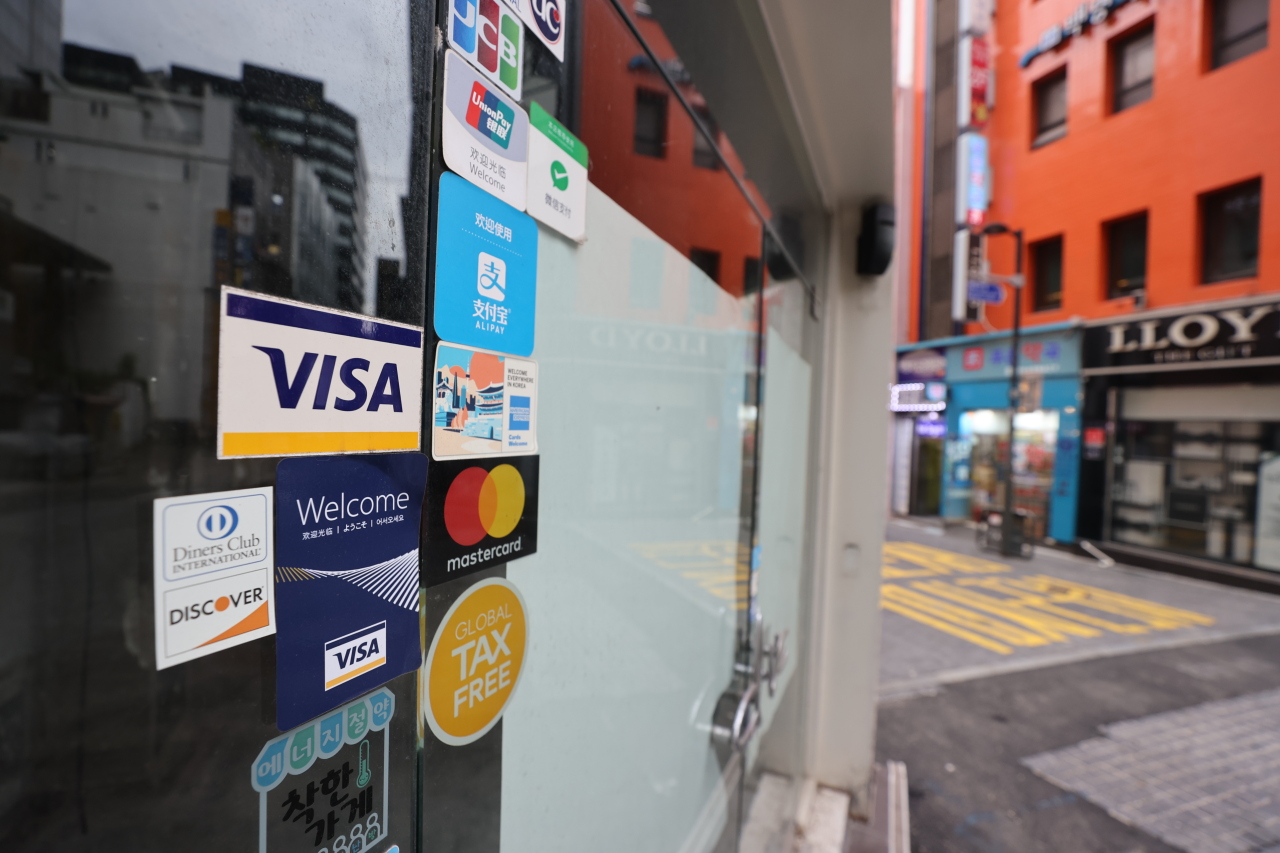 Credit card signs are attached on the door of a closed store in Myeongdong, Seoul on Sep. 27. (Yonhap)
South Korea’s new cashback scheme, designed to encourage private spending, has rather unusual criteria for coverage. Money spent at Emart Every Everyday stores is eligible for rewards, but not at Emart outlets.

But purchases made at big supermarket chains such as Emart, Costco and Homeplus as well as department stores and duty-free stores do not count towards the cashback scheme.

What’s the rationale behind this?

In a briefing earlier this week, Yoon In-dae, a director at the Ministry of Strategy and Finance explained supermarkets, outlet malls and duty-free stores were excluded following the same rule last year to “protect the local economy.”

Super supermarkets, also known as SSMs, were included in the new scheme, however, as nearly 30 percent were run by small business owners and self-employed people, he added.

But questions linger on over the measure’s fairness.

“It does not apply to most places. Why is online shopping not included when we are social distancing?” one online comment on Naver said.

Another comment pushed back, however, saying the scheme is designed to help those affected by the pandemic.

E-commerce platforms such as Coupang and Gmarket are also excluded from the list.

Market Kurly, an online grocery service, is part of the scheme, however.

The move, which comes into effect in October, gives buyers back up to 100,000 won ($84.38) per month if they are aged over 19 and their credit and check card spending rises by more than 3 percent compared to their average spending during the second quarter of this year.

If you spend 1.53 million won in October, but just 1 million won during the second quarter, you will receive 50,000 won, which is 10 percent of the increase after the first 3 percent.

The high threshold has been also been criticized.

“I looked up what the new consumption subsidy is about…How much more do I have to spend in 20 months?” one tweet read.

With a budget of some 700 billion won set aside, the scheme continues until November and people can apply through one of the nine major credit card firms in the country, including Shinhan Card and KB Kookmin Card.

Foreign nationals with an alien registration number can also apply for the scheme.