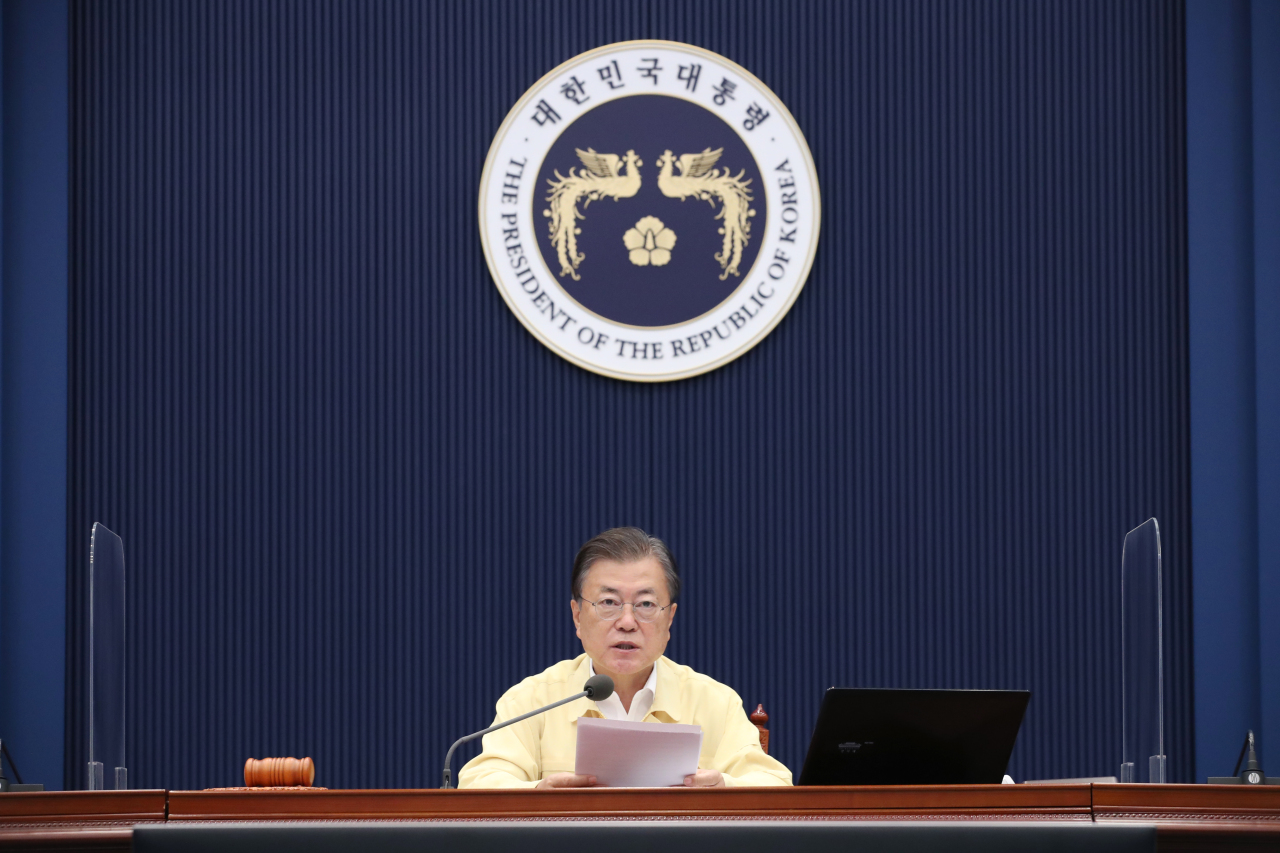 Citing economic damages from pandemic control measures, President Moon Jae-in said Korea could "no longer put off returning to normal in phases" during a Cabinet meeting Tuesday. (Yonhap)
President Moon Jae-in’s top officials on Tuesday once again reiterated the administration’s commitment to beckon a return to normal next month, when 80 percent of the adult population is anticipated to be fully vaccinated.

Prime Minister Kim Boo-kyum, overseeing the government’s COVID-19 response headquarters, told Tuesday’s meeting of senior officials that Korea’s pursuit of a “phased return to normal,” also dubbed “living with COVID-19,” in the coming month was “a road that must be taken.”

Speaking to broadcasters, Minister of Health and Welfare Kwon Deok-cheol likewise pronounced the sustainability of pandemic-related restrictions in the long run was “questionable,” especially considering the damages to livelihoods, echoing what President Moon Jae-in had said at a virtual Cabinet meeting earlier the same day.

The president said the country could “no longer put off returning to normal in stages” as economic consequences from the pandemic pile up, and wider vaccinations are “what will bring us closer to normal.”

As vaccinations accelerate, Korea is consolidating its place as a “global leader in COVID-19 response as well as economic recovery,” he added.

Korea is extending its vaccine program to minors ages 12 to 17 years old and pregnant women starting Oct. 18, after covering adults 18 and older for the first seven months, according to the Korea Disease Control and Prevention Agency on Monday.

Around the same time, booster shots will become available to people in their 60s and older as well as health care providers working with COVID-19 patients, six months after their second dose.

With about a month to go until the heralded point of a return to “normal,” what kind of changes Koreans can expect remains vague, with further announcements from the Health Ministry slated for Friday.

Kwon, the health minister, said for one thing that shedding face masks was not part of the plan, and that moving on would only be possible after a “sufficient proportion” -- which the administration has set at 70 percent -- of the overall population has completed their vaccination series.

So far 46 percent of Korea’s 51 million people have been fully vaccinated, according to the KDCA’s Tuesday situation report. In adults 18 and older, the rate stands at 54 percent.

One of the biggest changes will be that patients with no or mild symptoms will stay home instead of at Korea’s unique brand of nonhospital isolation facilities called “community treatment centers,” in a move intended to alleviate the burden on health care systems.

The minimum isolation period for patients admitted to hospitals or community treatment centers has also been shortened from 10 days after the initial symptoms to seven days.

By Monday, there were 32,450 patients classified as having active infections, who have taken up more than a third of COVID-19 beds across the country. Less than half of intensive care beds remained.

In Greater Seoul, where the majority of Korea’s cases have occured, hundreds of patients are currently at home. As of Monday, 258 patients in the capital city were placed under home isolation, 91 of whom are children too young to be separated from their caretakers. In Gyeonggi Province, which surrounds Seoul, more than 400 patients were undergoing at-home care last week.

Kwon has said Korea could handle about 3,000 cases occurring daily without hospitals collapsing -- a threshold that was crossed late last week with a new high of 3,271 cases.

Korea confirmed 2,289 more cases in the latest 24-hour period, the largest figure to be recorded on a Monday, when testing numbers usually drops. For the past seven days, an average of 2,368 cases were logged each day, up from a seven-day average of around 1,700 seen in early September, a rise that is attributed to an easing of social distancing restrictions over the month.