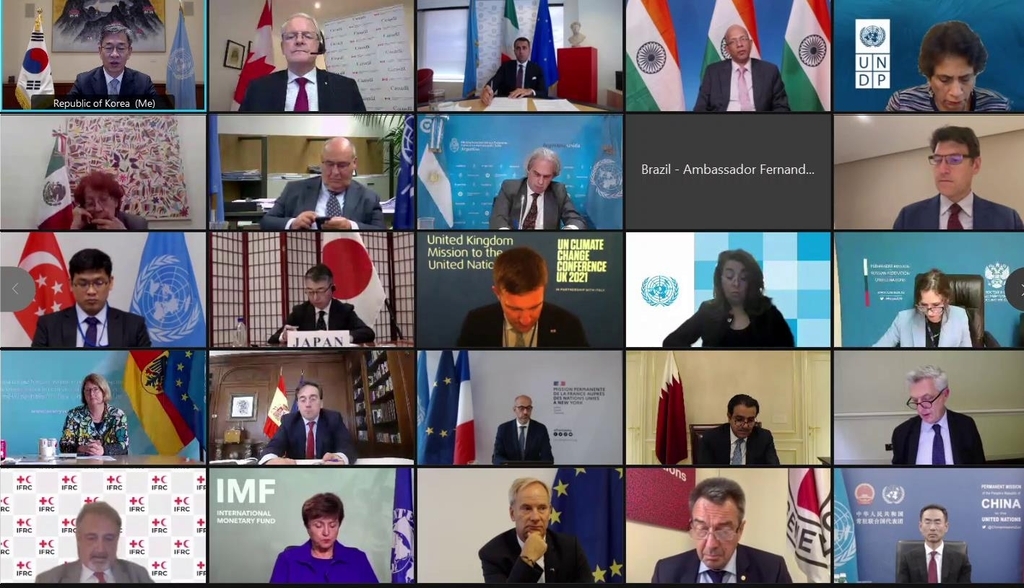 This captured image, provided by the foreign ministry on Thursday, shows the Group of 20 ministerial meeting held via virtual link to discuss the situation in Afghanistan. (Yonhap)
South Korea will join international efforts to help Afghanistan overcome the humanitarian crisis and other hardships in the wake of the Taliban takeover, the foreign ministry said Thursday.

Ham Sang-wook, deputy foreign minister for multilateral affairs, made the remark during a virtual ministerial meeting of the Group of 20 nations (G-20) held on the sidelines of the U.N. General Assembly on Wednesday.

In the meeting, Ham voiced concerns over the current situation in Kabul and called for concerted efforts by the G-20 members to explore ways for cooperation to help the country overcome the crisis, along with related international organizations, the ministry said.

"The deputy minister stressed that the government will join the international community's efforts to improve the situation in Afghanistan," it said.

At the meeting, the participants called for efforts to provide swift humanitarian assistance to Afghanistan and ensure the protection of human rights and freedom of movement in the country now under the control of the Taliban. They also agreed to work together on global anti-terrorism efforts.

Concerns over security and human rights violations have arisen after the Taliban retook power following the US withdrawal of its troops from the country late last month.

Last week, the UN Security Council adopted a resolution renewing the mandate of the UN Assistance Mission on Afghanistan, in which it called for the importance of the establishment of an "inclusive government" and upholding human rights. (Yonhap)