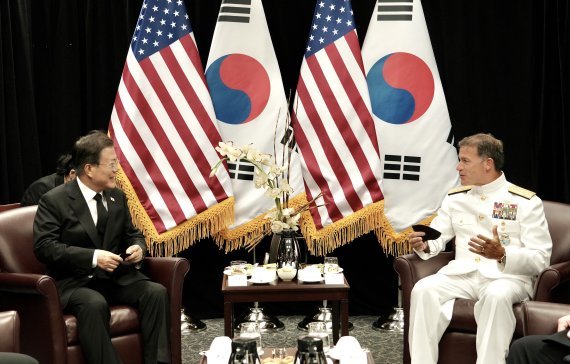 South Korean President Moon Jae-in (L) meets with Adm. John C. Aquilino, commander of the U.S. Indo-Pacific Command, at Hickam Air Force Base in Honolulu on Wednesday. (Yonhap)
South Korean President Moon Jae-in on Wednesday expressed his wish for his country and the United States to further enhance their combined defense capabilities to ensure permanent peace on the Korean Peninsula.

Moon made the remarks during his meeting with Adm. John C. Aquilino, commander of the US Indo-Pacific Command, at Hickam Air Force Base in Honolulu, where the two earlier attended a ceremony to transfer the remains of Korean and American soldiers killed during the 1950-53 Korean War.

Moon flew to Honolulu on Tuesday following a visit to New York for the U.N. General Assembly session.

"The diplomacy and dialogue necessary for complete denuclearization and permanent peace on the Korean Peninsula must be supported by strong security. The US Indo-Pacific Command plays an important role in such efforts," Moon said.

He thanked the commander and his soldiers for their hard work and expressed hope that the two countries' combined defense capabilities will be further enhanced in the future.

In response, Aquilino said the South Korea-US alliance is strong and ironclad, and the US military will always do its best for South Korea.

Touching on the joint war remains handover ceremony, Moon said the South Korean people will never forget the noble sacrifice of the American soldiers who shed blood for freedom and peace during the Korean War.

During the ceremony, South Korea received the remains of 68 Korean soldiers, killed in the war, from the US and handed over five sets of American service members' remains to their country.

Moon noted that two sets of the remains have been identified as those of two Korean soldiers killed in the Battle of Chosin Reservoir, also known as the Battle of Lake Jangjin, in 1950.

"Thanks to the victory at the Battle of Lake Jangjin, the Hungnam evacuation operation was successful," the president said, referring to the withdrawal of UN forces and North Korean civilians from the North Korean port.

"At that time, my parents were able to come to South Korea with the help of the US military, and I was also able to be here." (Yonhap)