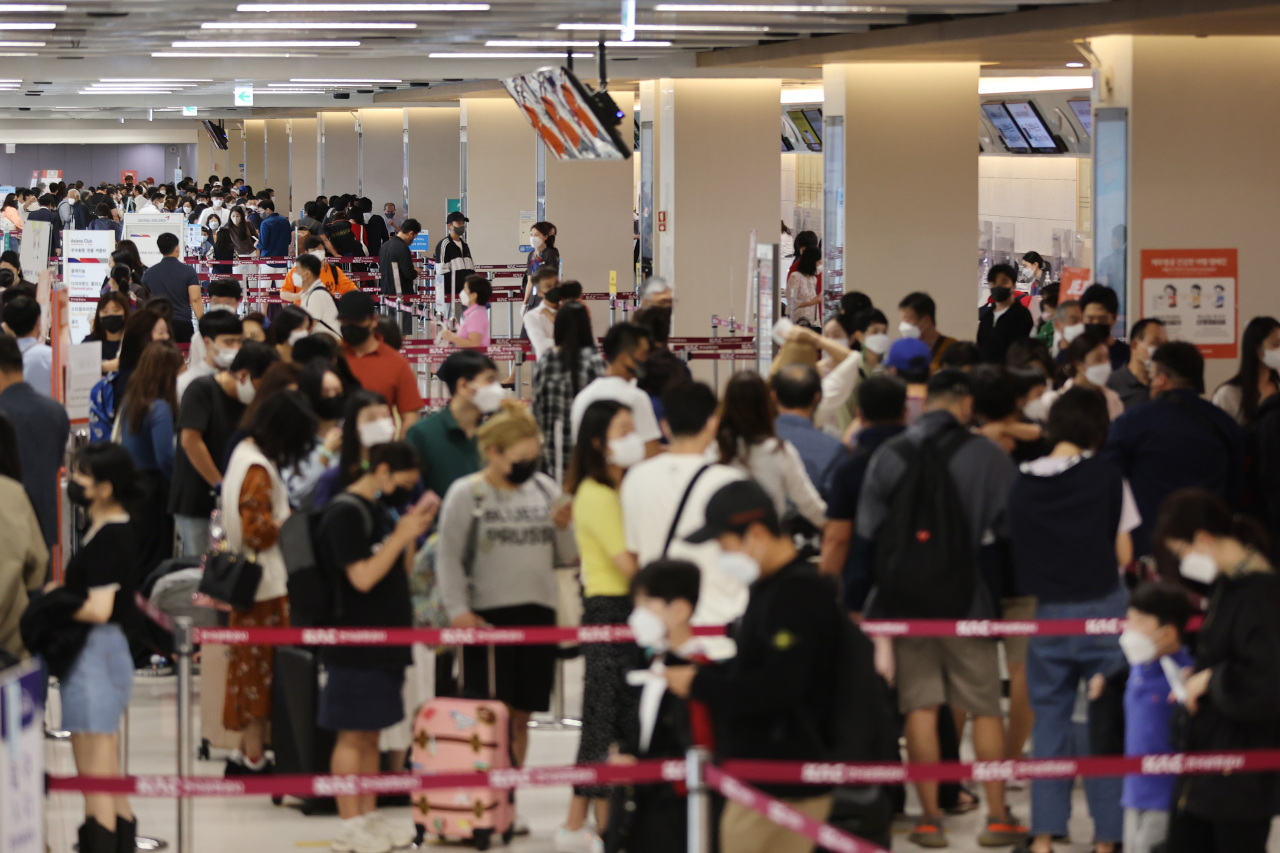 The domestic terminal of Gimpo International Airport in western Seoul is crowded with travelers on Friday. (Yonhap)
The annual exodus for Chuseok, the Korean equivalent of Thanksgiving, began Friday as South Koreans head to their hometowns for family reunions and take trips during the extended holiday.

This year's three-day Chuseok holiday runs from Monday to Wednesday and it is extended by an extra two days due to the preceding weekend. Traditionally, Koreans head back to their hometowns to be with their family members and visit their ancestors' graves to commemorate them.

The nationwide exodus is expected to create severe traffic jams on major roads, expressways, railroad stations and airports throughout the extended holiday period.

The state-run Korea Transport Institute estimates that about 32.26 million people are expected to hit the road to visit their hometowns during Chuseok. The average daily traffic is estimated at 5.38 million, 16.4 percent smaller than in 2019, a pre-COVID-19 year. Compared with last year's Chuseok, however, it marks an increase of 3.5 percent.

The smaller-than-usual exodus was long anticipated as health authorities have advised against hometown visits or travel during the extra-long holiday, due to fears of COVID-19 transmissions. A recent Gallup poll of 1,001 adults nationwide found 77 percent unwilling to leave their homes for more than one night during the Chuseok holiday.

In Seoul, Gimpo International Airport was increasingly crowded with travelers heading to hometowns or the southern resort island of Jeju, while congestion began on roads and highways leading out of the capital and other major cities.

Train stations, including Seoul Station, and express bus terminals were relatively quiet in the morning but are expected to gradually be crowded in the afternoon.

At Gimpo airport, western Seoul, hundreds of people, some holding holiday gifts in hand, waited in long lines in front of the check-in desks on the second floor of the passenger terminal.

"I can see my parents living in Seoul often, so I'm going on a trip to Jeju with my family during the holiday," said 38-year-old Park Seung-won, flanked by his wife and two sons.

Park said his family plans to usually visit quiet places on the island rather than crowded beaches and famous tourist spots to reduce the risk of being exposed to COVID-19.

With the majority of holidaymakers set to hit the road Saturday, airports, train stations and express bus terminals across the country are expected to be packed throughout the weekend, officials said. (Yonhap)