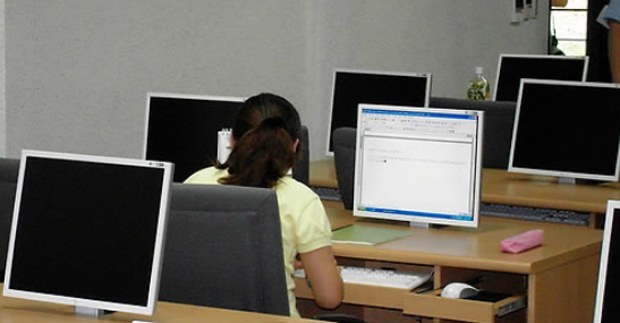 A defector from North Korea in a classroom of the Korea Hana Foundation, an executive unit of the Unification Ministry (Yonhap)
SEJONG -- Refugees from North Korea have seen their assets -- both real estate and cashable -- shrink in 2020, compared to 2017 when the nation started compiling the relevant data.

In particular, 7 in 10 households that include at least one refugee from North Korea, posted under 50 million won ($42,800) in real estate assets, data from state agencies showed.

According to the Korea Hana Foundation and Statistics Korea, property assets -- such as houses and land -- held by the North Korean defector families stood at 79.14 million won on average last year.

The analysis showed that 70.5 percent of the defector households were found to have owned property assets worth less than 50 million won. This indicates that the majority of defectors were not owning homes. 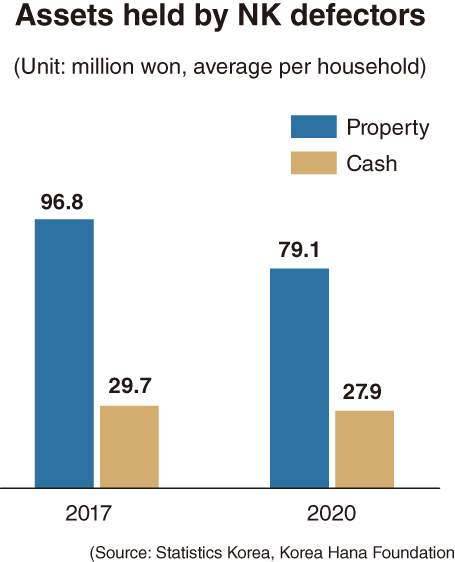 (Graphic by Kim Sun-young/The Korea Herald)
Only 6.8 percent of the refugee families owned houses or land worth 300 million won or over.

A noteworthy point is that their real estate assets has declined, compared to 2017 when it stood at 96.84 million won.

When it comes to the South-born nationals, their apartment prices in Seoul and some major regions shot up about 50-150 percent during the 2017-2020 period.

Given that 80.5 percent of them posted less than 50 million won in cashable assets, a large portion of the households are likely to have been suffering from unemployment or debt.

Meanwhile, the outstanding debt held by defector households came to an all-time high of 72.06 million won on average in 2020, compared to 61.56 million won a year earlier. Compared to 2017, their debt surged by 58.1 percent.

Nearly 1 in 4 defectors, or 23.6 percent, were saddled with household debt worth 100 million won or over as of last year.

Defectors have also struggled to find jobs. While South Korea has been posting quite low employment rates among the 37 members of the Organization for Economic Cooperation and Development, the figure goes further down when it comes to refugees.

The defectors posted a 54.4 percent employment rate in 2020, below the national average of 59.1 percent, Statistics Korea data showed.

Data suggests that those whose residing period in the South was less than three years were having difficulty finding jobs. The employment rate for those with three-year careers here stayed at 45 percent.