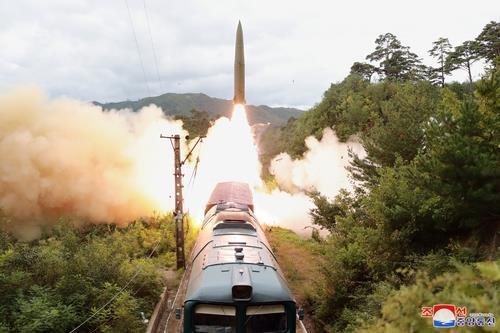 "The railway-borne missile regiment took part in the drill with a mission to strike the target area 800 kilometers away from its location after moving to the central mountainous area at dawn on September 15," the official Korean Central News Agency (KCNA) said.

The KCNA said the North accurately struck the target in the East Sea.

The missiles appeared to have been launched from a train rather than a transporter erector launcher (TEL), according to photos released by state media.

The KCNA said that the drills were organized to "increase the capability of dealing an intensive multi-concurrent blow at the forces posing threats to us at a time of conducting necessary military operations."

The test-firing was also conducted to confirm the "practicality of the railway-borne missile system deployed for action for the first time" to judge combat readiness and to "attain proficiency in case of fighting an actual war."

Pak Jong-chon, member of the Presidium of the Politburo of the ruling Workers' Party, guided the latest drills, along with other top officials. North Korean leader Kim Jong-un did not oversee the test-firing.

"(Pak) said that the deployment of the railway-borne missile system for action in accordance with the line and policies on modernizing the army set forth at the eighth Congress of our Party holds very great significance in increasing the war deterrence of the country," the KCNA said.

The latest test is the second ballistic missile launch by the North so far this year, and its fifth known major weapons test if the cruise missile tests are taken into account. (Yonhap)