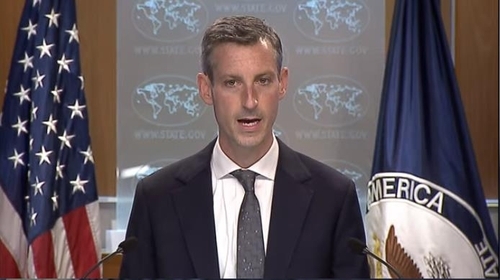 "We do condemn the DPRK's missile launches. These missile launches are in violation of multiple U.N. Security Council resolutions. We know that they pose a threat to DPRK's neighbors and other members of the international community," the spokesman told a press briefing.

"The launches are in violation of multiple U.N. Security Council resolutions, and these activities highlight the destabilizing impact of the DPRK's illicit weapons program," Department of Defense spokesman John Kirby said in a press briefing.

He also reiterated the US' defense commitment to its allies in the region, while pointing to US missile defense system capabilities there that he said stand ready and capable.

"It's about making sure that our missile defense system, wherever it's deployed, is effective and capable, and we routinely test and experiment and try to improve that system on a daily basis," he said.

"Our commitment to the defense of the Republic of Korea and Japan remains ironclad," added Kirby, referring to South Korea by its official name.

A State Department spokesperson earlier told Yonhap News Agency that the US remains committed to dialogue with the North.

Price said the US sees diplomacy and dialogue as the only way forward.

"We are, in the midst of this, committed to a diplomatic approach to the DPRK, and we call on the DPRK to engage in a meaningful and substantive dialogue with us," he said at the briefing.

The North's latest missile launches come amid US outreaches to Pyongyang, offering to meet "anytime, anywhere without preconditions."

"We are saying that we continue to believe that diplomacy is the means by which we can achieve the goal that our policy review identified, and that is the denuclearization of the Korean Peninsula," he said.

Price also reiterated the US' defense commitment to US allies in the region, including South Korea.

"All the while, our commitment to our allies, including Japan and the Republic of Korea, is ironclad," said Price.

The latest missile launches also come after the North test fired a new long-range cruise missile over the weekend.

White House spokeswoman Jen Psaki said the White House was aware of the missile launches, but that it had no additional comments.

"I would note that in the INDOPACOM statement they said they, of course, are aware of the missile launch, as are we," she said when asked about the North's missile launch in a daily press briefing, referring to a statement released earlier by US Indo-Pacific Command.

"They have also stated that they have assessed that this event does not pose an immediate threat to US personnel or territory or to our allies, (and that) the missile launch highlights the destabilizing impact of the DPRK's illicit weapons program," she added.

A report said the U.N. Security Council was set to hold an emergency meeting on the North Korea's missile launches later in the day.

The meeting "was requested by France and Estonia," AFP reported, citing an unidentified diplomatic source.

It added the meeting will be held "informally" and behind closed doors. (Yonhap)