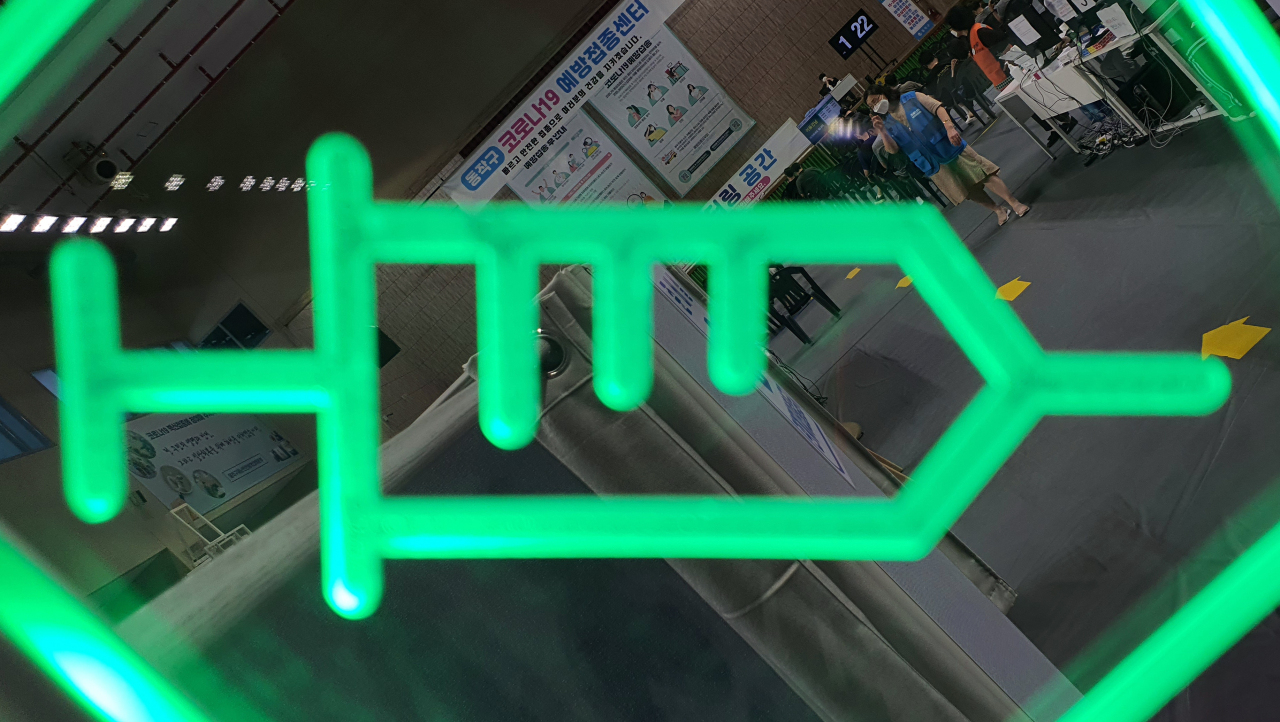 This photo of a COVID-19 vaccination clinic in Dongjak, a southern Seoul district, was taken Tuesday. (Yonhap)

South Korea is close to reaching the COVID-19 vaccination milestone of a 70 percent first-dose rate sometime this week, more than six months since the campaign began on Feb. 26. By Tuesday’s end, 67 percent of the 51 million people here had been vaccinated with at least a single dose of a vaccine.

But in the race to clear the vaccine target, some key recommendations are being loosely observed, experts point out, raising safety and other concerns.

AstraZeneca and Johnson & Johnson vaccinations, both of which are recommended for people aged over 50 years here, are being offered to people as young as 30 for the time being until Saturday -- when the Chuseok holiday begins. This is also when Korea’s deadline for reaching the 70 percent first-dose rate falls.

The age cutoff for both adenoviral vector vaccines was raised from 30 to 50 years old over the risk of a rare but serious blood clotting side effect called thrombosis with thrombocytopenia syndrome, or TTS. According to the national advisory committee on immunization practices’ advice, the benefits of the two vaccines only begin to “far outweigh” their potential risks from the age of 50.

Starting Aug. 13, however, people in their 30s and 40s have been allowed to take “leftover” doses -- extra doses resulting from “no-shows” or canceled appointments -- of the AstraZeneca vaccine to minimize vaccines going unused.

So far, out of 732,324 people in their 30s who received at least one dose of the AstraZeneca vaccine, two have been confirmed with the vaccine-induced blood clotting disorder. Both of them were men, one of whom fell critically ill and the other of whom died.

In an Aug. 25 phone call, a director within the Korea Disease Control and Prevention Agency’s COVID-19 vaccination council admitted that no risk assessment was carried out before letting people under 50 get the AstraZeneca vaccine again against current advice. He reaffirmed the AstraZeneca age cutoff would stay fixed at 50, as potential harms of the shot are greater in those who are younger.

Johnson & Johnson vaccines have recently become available to people in their 30s and older at municipal public health offices as well.

Kim Ki-nam, a senior KDCA official, explained in last week’s news briefing that around 350,000 doses of the Johnson & Johnson vaccine were distributed across municipalities last month with a due date of Sept. 18 “to be put into arms as quickly as possible.”

One senior official leading Seoul’s COVID-19 vaccination support team said as of Monday midnight, some 10,206 people in the city have received the Johnson & Johnson vaccine via the temporary program that opened Aug. 24, per the KDCA announcement.

“Anyone 30 and above who wishes to get the Johnson & Johnson can while the program lasts,” she said.

Earlier this month, Gyeonggi Province also set up vaccination centers throughout the region dedicated to providing the one-dose vaccine to run only before this weekend, except in two districts of Ansan.

Dr. Kim Woo-joo, an infectious disease professor at Korea University, said vaccine decisions “must be based on evidence-based analysis.” “The KDCA did not provide a cost-benefit analysis to support the move to open up AstraZeneca or Johnson & Johnson vaccinations in younger age groups once again,” he said.

“Safety is the utmost priority, more so than speeding up vaccinations or preventing vaccine wastage.”

Due to a series of delays in summer vaccine deliveries, the gap between the first and second doses of the two mRNA-type vaccines, from Pfizer and Moderna, was spaced out to six weeks from Aug. 16.

By standard, the two-dose series of the Pfizer vaccine is separated by three weeks and Moderna’s by four weeks, according to the US Centers for Disease Control and Prevention and the product information from the pharmaceutical companies.

Kim of the KDCA said returning to a shorter dosing schedule would depend on vaccine supplies.

“The deliveries for the rest of September and October are still being negotiated with pharmaceutical companies,” he said, adding that the agency would review shortening the time until the second dose once the amount of vaccines arriving in the country in the next few weeks is decided.

As of the latest count, a combined 16.6 million doses of AstraZeneca, Pfizer, Moderna and Johnson & Johnson vaccines were left in Korea’s stockpile.

Hong Jeong-ik, another senior KDCA official overseeing the COVID-19 vaccination campaign, told reporters during an Aug. 25 closed-door briefing that the vaccines in stock were primarily being used up as first doses, without leaving supplies for people who will be due their second doses later.

Son Young-rae, spokesperson for the Ministry of Health and Welfare, said in Wednesday’s televised news briefing that “completing the vaccination series with a second dose has become highly significant after the delta variant emerged.” In Korea, just 40 percent have been fully vaccinated.

“Before the delta variant spread, I’ve said the first dose is approximately 80 percent effective, but now that has changed. You are not well-protected after a first dose,” he said.

As for plans for reducing the lengthened interval between vaccine doses, Son said that “efforts are underway.” “At this rate, 70 percent of the population is expected to be fully vaccinated soon, presumably before the end of October.”

To defend against variants, receiving the second dose in time is critical, according to Dr. Paik Soon-young, an emeritus professor of virology at Catholic University of Korea. Data out of the UK showed one dose of Pfizer or AstraZeneca’s vaccine was about 33 percent effective at preventing infection with delta.

“If Korea has enough vaccines secured to cover both first-time and second-time recipients, there is no reason to put off going back to the standard dosing schedule so that people can benefit from the maximum protection of two full doses faster,” Paik said.

Asked to comment on possible safety issues of a delayed second dose, he said, “That in itself should not cause side effects. But then again, I don’t think there is data on how the six-week spacing may affect antibody response or adverse event reactions.”

Dr. Chun Byung-chul, an infectious disease epidemiologist and the vice president of the Korean Vaccine Society, said that adhering to the three-week or four-week dosing interval as tested in clinical trials would be “the best approach.”

“It would be the job of the public health authorities to monitor and compare antibody levels when the doses are given six weeks apart, as opposed to three weeks or four weeks,” he said.