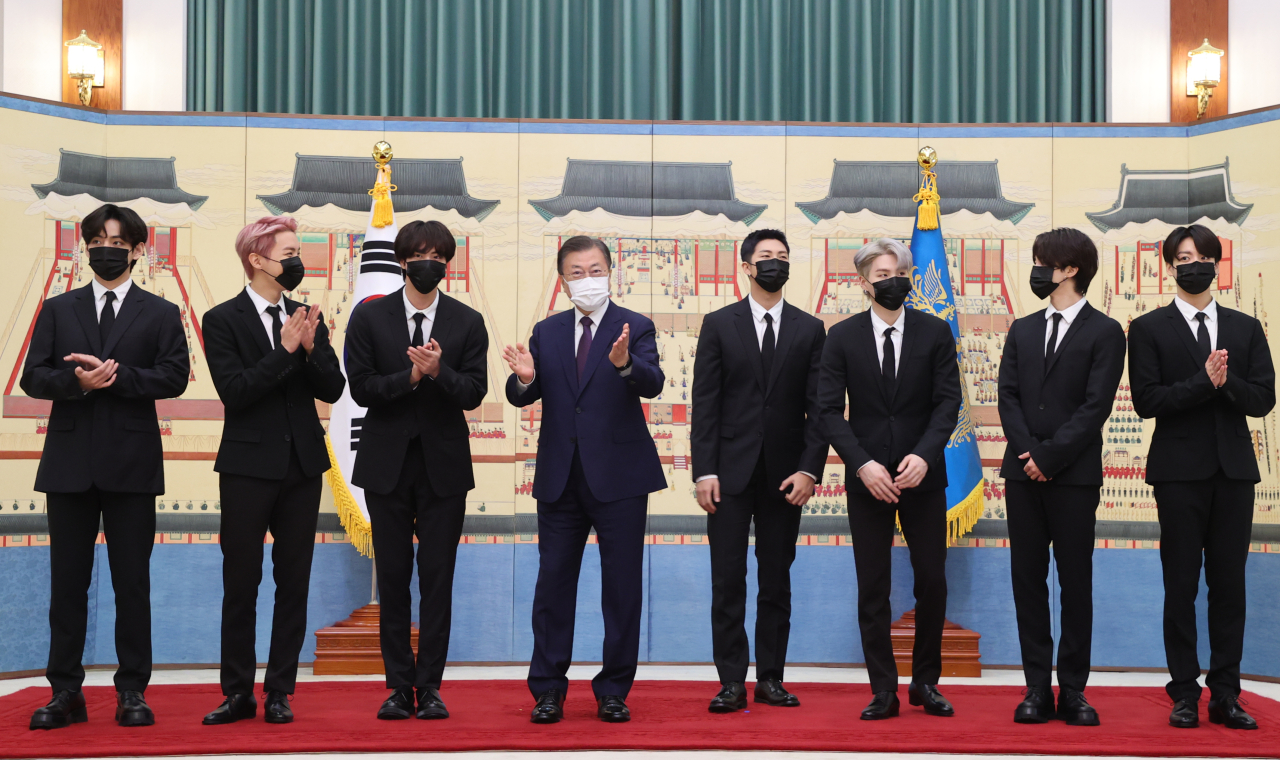 Donning black masks and black suits, the septet attended a ceremony Tuesday morning at Cheong Wa Dae in Seoul, marking the start of their roles as “special presidential envoys for future generations and culture.” President Moon conferred a letter of appointment on each band member, along with a diplomatic passport and a fountain pen.

In July the presidential office appointed BTS to the role in the hope of raising awareness about global issues among younger generations, and also of enhancing the nation’s diplomatic power and global stature in the post-coronavirus era.

On Monday, BTS will speak and perform online at SDG Moment 2021, an annual meeting of leaders from 193 member and observer nations dedicated to the UN’s sustainable development goals.

During a private meeting between Moon and BTS after the ceremony on Tuesday, Moon revealed that the UN had initiated BTS’ invitation. 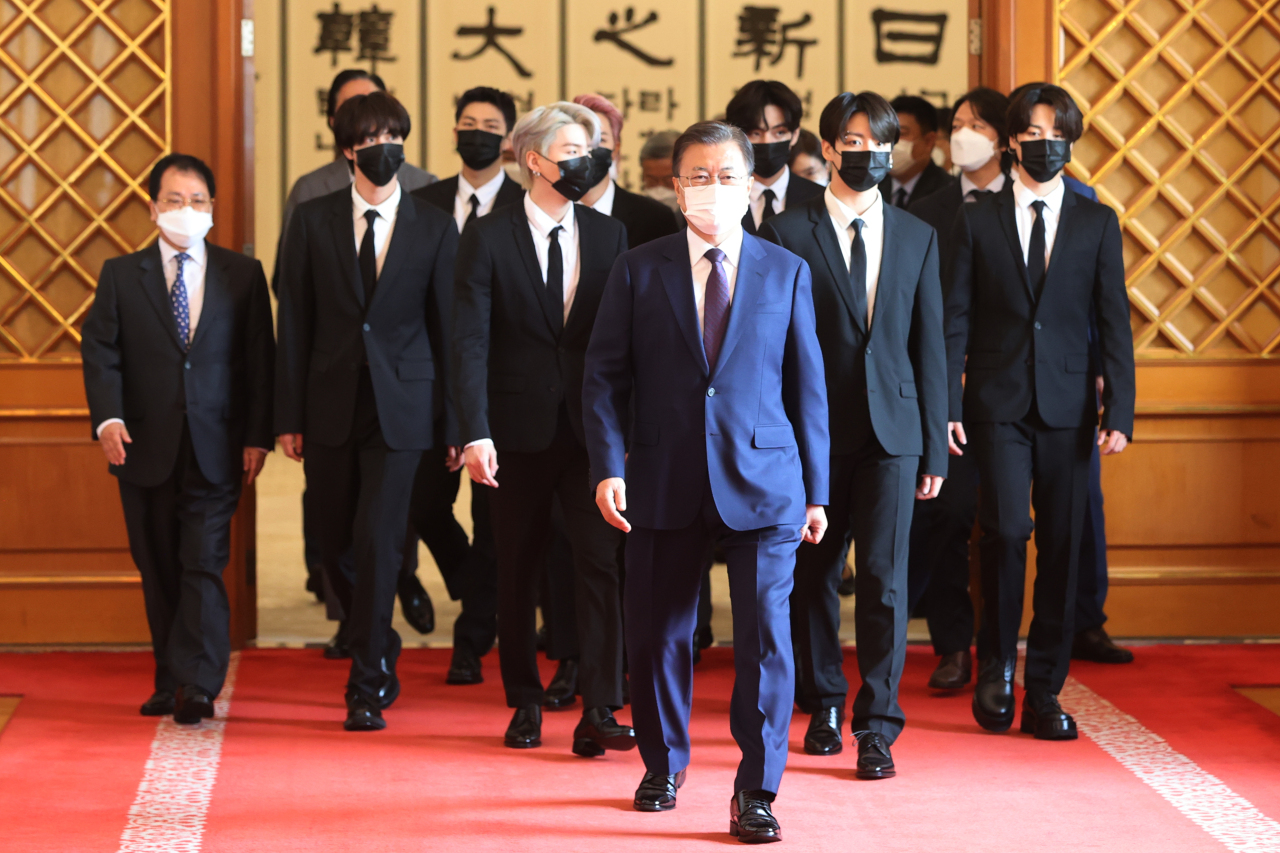 South Korean president Moon Jae-in (front) and BTS members, along with other attendees of the event leave the ceremony venue and head to closed-door meeting at Cheong Wa Dae on Sept. 14, 2021 (Yonhap)
“The United Nations requested if I could attend the special SDG meeting on behalf of other national leaders, along with BTS on behalf of the global youth,” Moon said in a statement from the presidential office. “That itself shows the enhanced global stature of South Korea.”

The president said BTS’ global influence had benefited his diplomacy, and that the K-pop stars were often a topic of conversation between him and other world leaders.

“Some had even asked if we could invite BTS to hold a K-pop night when they make state visits. As such, you have been of great help diplomatically,” the president said.

Congratulating BTS on their recent success on Billboard with “Butter,” especially on reclaiming the No. 1 spot on the Hot 100 chart and more recently on winning three trophies at the MTV Video Music Awards yesterday, Moon said, “BTS has greatly raised the national dignity by enhancing the stature of K-pop and Korean culture, and I am grateful in many ways.”

Declaring himself a fan, Moon also praised the group’s continual efforts to spread a positive message.

Noting the use of sign language in the song “Permission to Dance,” Moon said, “Not only such efforts to empathize with the disabled, but constantly spreading messages of support and consolation through music to youths around the world suffering from this coronavirus situation, this is not something anyone can do, and I am again grateful for such.”

“Our generation studied English listening to pop songs, but now the global audience is learning Korean to understand BTS songs,” she said. 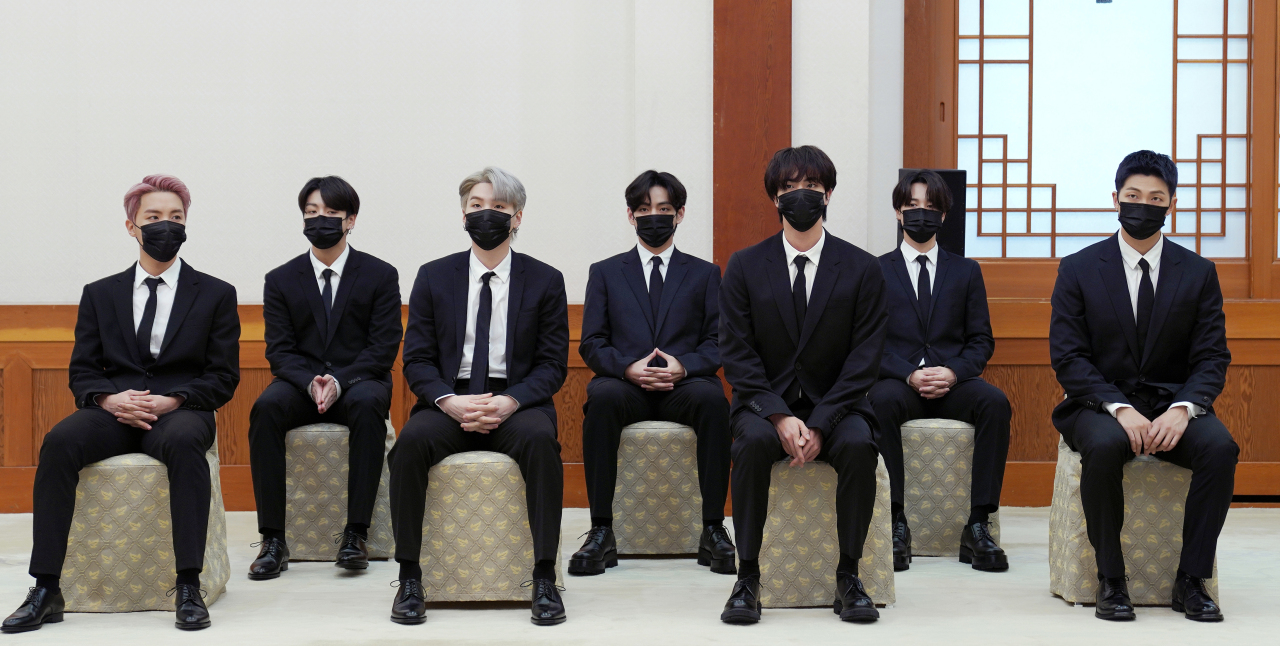 (From left) Members J-Hope, Jungkook, Suga, V, Jin, Jimin and RM of BTS sit during their meeting with president Moon Jae-in at Cheong Wa Dae on Sept. 14, 2021 (Yonhap)
BTS leader RM said, “It is a huge honor, both as an individual and a citizen, to be able to hold the title of special presidential envoy for future generations and culture. We’re always thinking about how we could give more and return the love we have received, and we’re just thankful that the president has presented us with such a big opportunity. We will do our best as special envoys.”

The upcoming visit marks BTS’ third foray to the UN General Assembly. In 2018, during the launch ceremony for UNICEF’s Generation Unlimited program, RM delivered an empowering message to young people worldwide about speaking one’s mind. Last year in a prerecorded video, all seven musicians urged young people around the world to pursue their dreams despite the challenges of the COVID-19 pandemic.

In closing the meeting, RM added, “As we have been to the UN once before, we’ll return after successfully completing our job with our youthful vigor and passion, as always. We’re grateful to be granted such responsibility.”