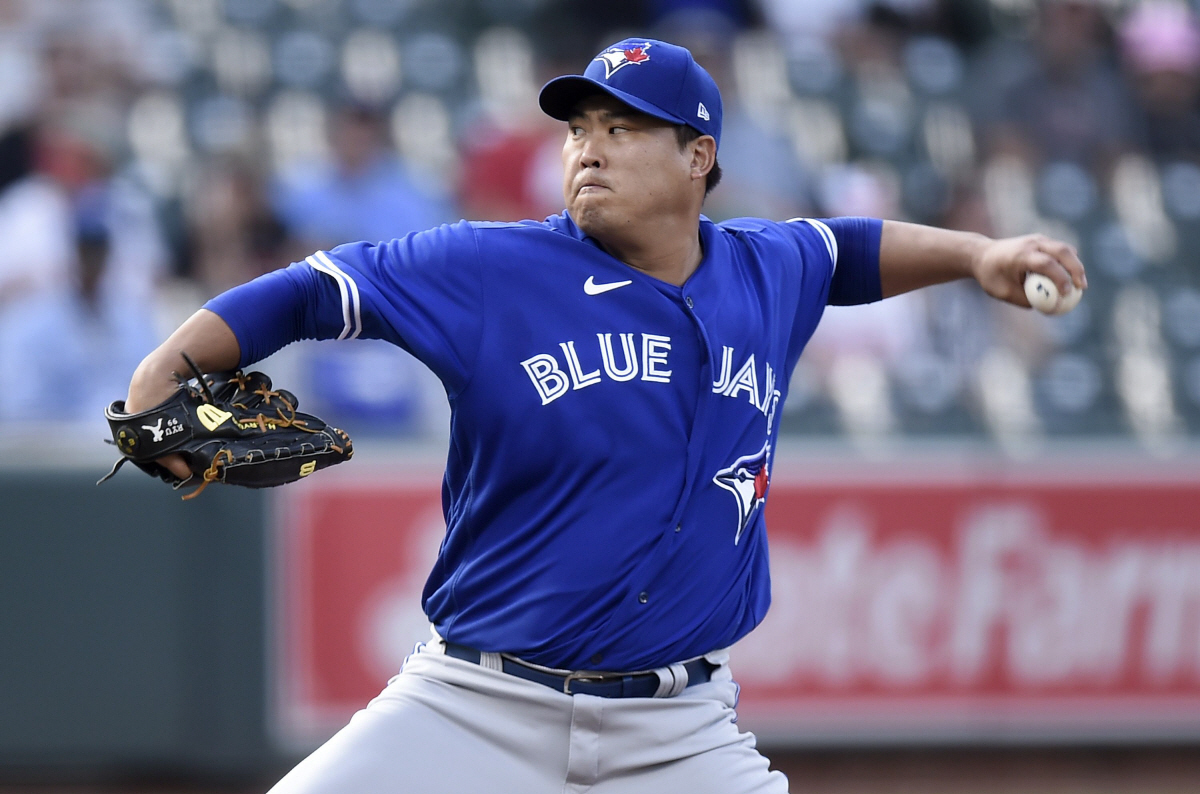 In this Getty Images photo, Ryu Hyun-jin of the Toronto Blue Jays pitches against the Baltimore Orioles in the bottom of the first inning of a Major League Baseball regular season game at Oriole Park at Camden Yards in Baltimore on Sept. 11, 2021. (Yonhap)
Toronto Blue Jays' starter Ryu Hyun-jin got roughed up by the lowly Baltimore Orioles, narrowly avoiding his ninth loss of the season when his offense bailed him out in late innings.

The South Korean left-hander pitched a season-low 2 1/3 innings and allowed seven earned runs on eight hits at Oriole Park at Camden Yards in Baltimore on Saturday (local time) in the first game of a doubleheader. The Blue Jays trailed 7-3 when Ryu got the hook, but rallied for an 11-10 victory over the worst team in the American League (AL).

This was the third start of this season in which Ryu allowed at least seven earned runs, and all of them have come since Aug. 8.

The Orioles jumped on Ryu right from the beginning. After Trey Mancini's two-out double, Anthony Santander hammered a first-pitch fastball and drove it over the left field wall for a two-run homer.

The Blue Jays tied the score at 2-2 thanks to a two-run blast by Lourdes Gurriel Jr., but Ryu failed to keep things that way.

With runners at second and third in the bottom second, Richie Martin brought home a go-ahead run with a groundout to second. Then Austin Hays smoked a two-run home run to left to put the Orioles up by 5-2.

The Blue Jays cut the deficit to 5-3 in the top third as Vladimir Guerrero Jr. smacked a solo homer, but the Orioles had more than enough offense left in them.

Ryu walked Mancini to begin the third, and gave up a single to Santander. After striking out Ramon Urias, Ryu allowed a single to Pedro Severino to load the bases.

Manager Charlie Montoyo visited the mound for a chat with Ryu, apparently ready to take him out, but decided to give the veteran pitcher a chance to work his way out of the jam. Two pitches later, though, Ryan McKenna doubled to left field to cash in a pair of runs for a 7-3 lead and knocked Ryu out of the game.

Reliever Ross Stripling got the next two outs to prevent further damage. Blue Jays catcher Danny Jansen belted a two-run shot in the top fourth to make it a 7-5 game, but the Orioles lit up Stripling for three runs in the bottom half of that inning to open up a 10-5 lead.

The Blue Jays clawed back with two runs in the top fifth and made it a 10-7 game. And with the game seemingly out of reach, the Blue Jays put up a four-spot in the top of the seventh to take an 11-10 lead. A single and a sacrifice fly brought in the first two runs of the inning, and then George Springer capped off the rally with a go-ahead two-run home run off Tyler Wells

Ryu had experienced some forearm tightness after throwing 80 pitches over six shutout innings against the New York Yankees on Monday. Ryu and Montoyo both said there wasn't any serious health issue, though Ryu's shaky performance in Baltimore certainly left a question mark.