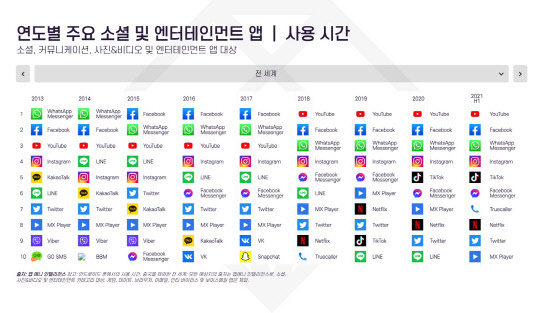 The top four countries were the US, Japan, China and Saudi Arabia.

Users in Korea spent the most time on video streaming app YouTube, while spending the most money on KakaoTalk -- a popular messaging app with features such as banking and shopping that boasts over 45 million monthly active users in a country of about 51 million.

KakaoTalk has dominated consumer spending on social apps in Korea for 10 years.

Online secondhand marketplace Danggeun Market was identified as the most downloaded app during the same period, followed by streaming app Netflix and KakaoTalk.

The app first entered the list in 2019 as the No. 4 most-downloaded app in the country before soaring to the top last year.

According to App Annie’s estimate, global spending on social apps will reach 89.52 trillion won by 2025. And 19.9 trillion won is expected to go toward supporting content creators and livestreaming.

Livestreaming apps have been growing by an average of 25 percent each year since 2018, the digital analytics company said, accounting for 76 percent of all social app consumer spending this year.

“By the end of 2021, the amount of time spent on social apps on Android phones in the top five countries excluding China is projected to exceed 5 trillion hours,” he said.

The shopping app was used by some 23.6 million people during the month of August, far outpacing rivals 11st and Gmarket, which had 7.8 million and 6.5 million users, respectively.

Home interior design app Ohouse was the most popular “specialty shopping” app across all age groups, the app tracker said.