“Hyundai Motor envisions a future society where hydrogen energy is available for everyone, everything and everywhere. I have no doubt that hydrogen will bring revolutionary changes for humankind,” the chairman said.

To accelerate the transition to a hydrogen society, the auto group, which both Hyundai Motor and Kia belong to, will employ hydrogen fuel cells in all of its new commercial car models by 2028, he said.

Between now and then, the automaker will equip its new models either with hydrogen fuel cells or batteries.

At the event, Chung showcased prototypes of third-generation 100-kilowatt and 200-kilowatt fuel cells that he said would be available in the market starting in 2023.

“We will cut the price of third-generation fuel cells by more than 50 percent from the current level. By 2030, they will be cheaper and allow hydrogen vehicles to become as cheap as electric vehicles,” a Hyundai Motor official said.

The fuel cells will be mounted on a “flat” system just 25 centimeters thick, easy to install on the roof or the bottom of a vehicle. Potential applications include trams, trains, ships and air taxis, the tycoon added.

During the event, which was held virtually, Chung also introduced the e-Bogie as an example of how the automaker’s fuel cell and self-driving technologies could create synergy. 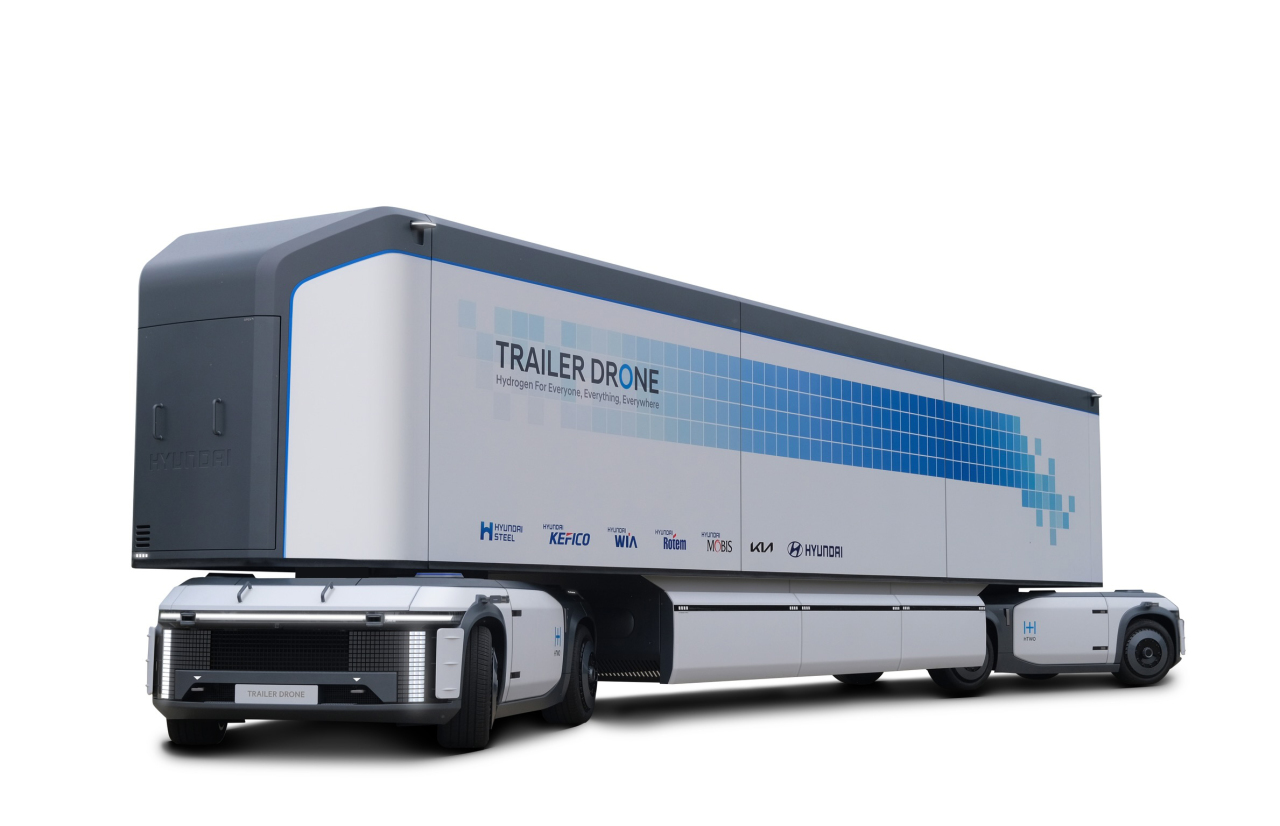 Powered by hydrogen fuel cells, the e-Bogie is a four-wheeled trailer drone that can be loaded with containers. On a single charge, the autonomous robot will be able to travel 1,000 kilometers, something no EV can do.

With the e-Bogie, Hyundai Motor aims to take the initiative in the global light commercial vehicle market, where 7 million unit sales are projected per year by 2030.

In addition, Hyundai Motor debuted its hydrogen-powered sports car, the Vision FK, letting the world know of its ambition to challenge passenger EVs. Able to go from zero to 100 kilometers per hour in less than four seconds, the Vision FK offers a maximum driving range of 600 kilometers. 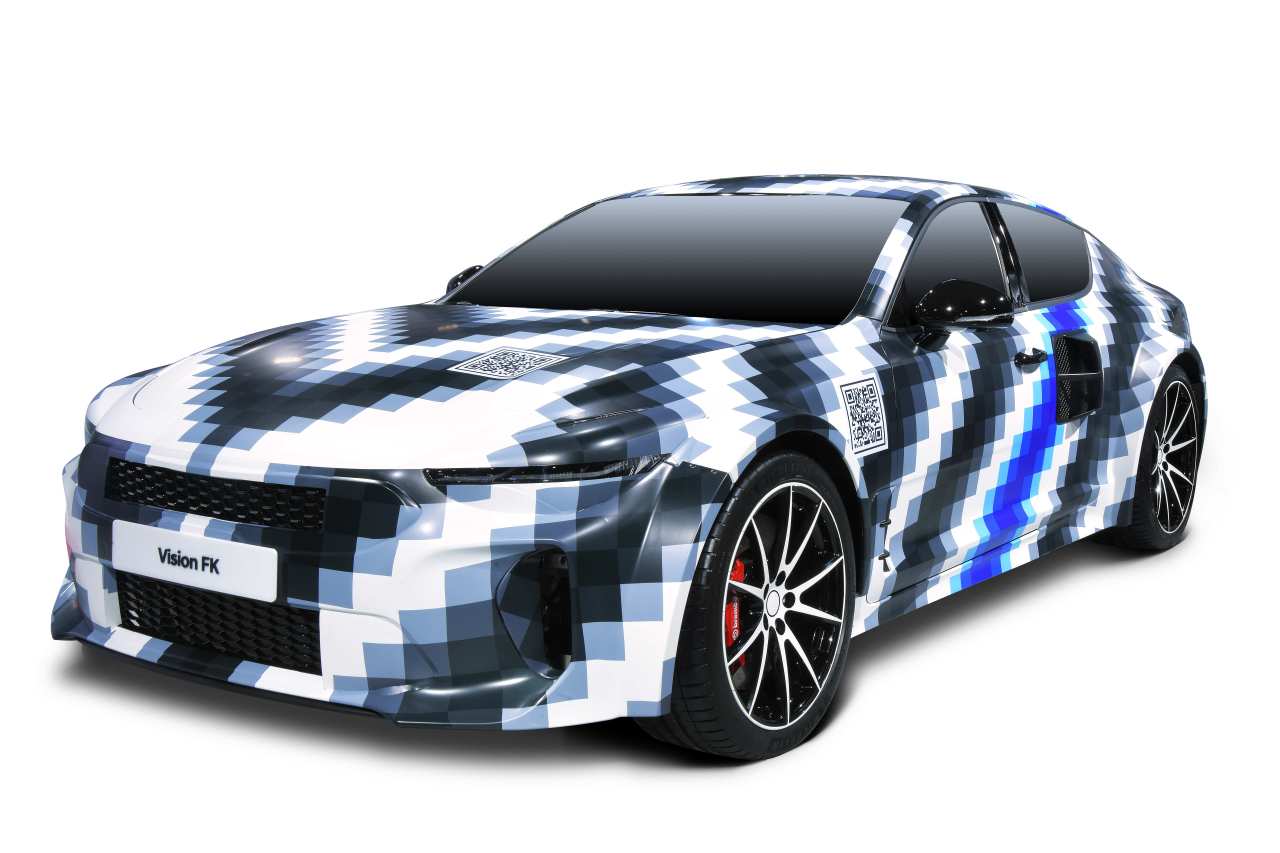 In keeping with the vision to provide hydrogen everywhere by 2040, Chung showcased a portable hydrogen charging station as a solution to the nation’s weak hydrogen infrastructure.

During a Q&A session, Kim Sae-hoon, executive vice president and head of the fuel cell center at Hyundai Motor, suggested that small ships would be one of the first sectors where fuel cells would be used outside the automotive industry.

“Fuel cells have difficulties in dissipating the heat, because they operate at 70-80 degrees Celsius. So we always have a problem of cooling. I met a lot of (ship) companies and asked about how they dissipate heat. They say, ‘Don’t worry. We have a lot of seawater and river water,’” Kim said.

Asked when Hyundai Motor expects to achieve operating profit in the hydrogen business, Kim said, “I hope it happens by 2040.”

As to when the Xcient -- a heavy-duty truck that Hyundai Motor has so far exported only to Switzerland -- will be available in the Korean market, Chung said domestic mass production would kick off in the first half of next year.

Hyundai Motor will display its cutting-edge hydrogen technologies at the H2 Mobility+Energy Show, which will be held from Wednesday to Saturday at the country’s largest convention center, Kintex, northwest of Seoul in Goyang, Gyeonggi Province.

According to the Hydrogen Council, a global CEO-led initiative of leading energy, transport, industry and investment companies, hydrogen energy will account for 18 percent of global energy demand by 2050, with a market worth $2.5 trillion. The popularization of hydrogen energy will also help cut carbon emissions by more than 6 billion tons a year while creating over 30 million new jobs.