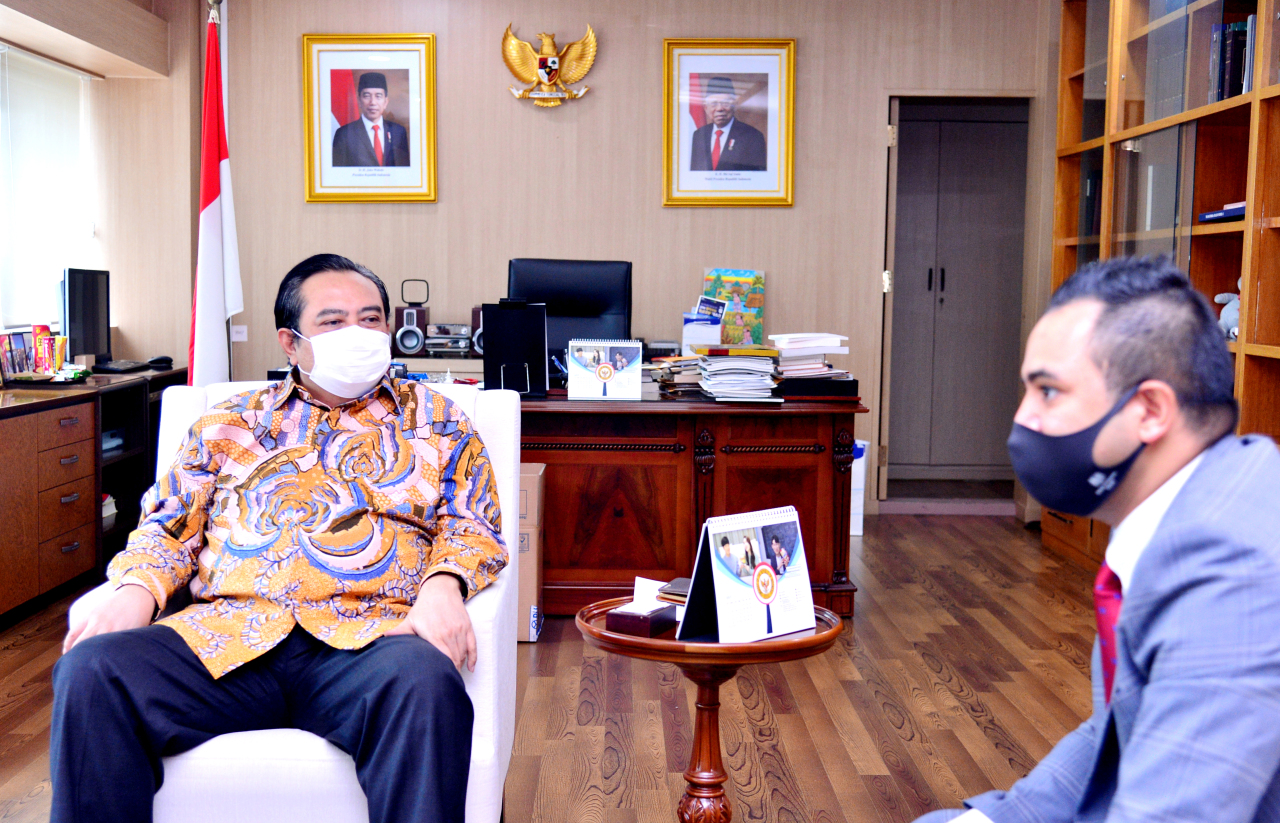 Indonesian Ambassador to Korea Umar Hadi speaks during a recent interview with The Korea Herald. (Park Hyun-koo/The Korea Herald)
Climate change is the biggest existential challenge for humankind and the world needs to make a collective effort to use the rapidly narrowing window of opportunity to tackle the issue, says Indonesian Ambassador to Korea Umar Hadi.

“We shall think green and transform now,” Hadi said in an interview with The Korea Herald, underscoring a need for a new ideology on sustainable development and for industries to undergo a green transformation.

Though “it is much easier said than done,” Hadi believes the international community can work together to make the green transformation a reality.

Drawing a parallel with how the world came together for the anti-apartheid movement in South Africa, Hadi said the same effort was needed to address climate change.

“It’s difficult to unite the world for a common cause as (it) needs responsible leadership and consistency of saying it again and again with proper action, however, world would unite at one time and address the existential issue of climate change.”

While progress is being made on the global stage with landmark discussions, such as the P4G Seoul Summit held in May, and the upcoming 2021 United Nations Climate Change Conference in Glasgow, Scotland, the world needs to hurry, he said.

Hadi highlighted Indonesia’s commitment to the cause and said his country could play an integral role in pushing global action and finding solutions.

Efforts to bring in more electric vehicles and diversify energy sources are underway, including cooperating with South Korean companies in a range of areas such as the battery industry.

“Indonesia is big producer of coal. Many projects are in the pipeline in the industry to modify through technology such as gasification of coal,” he said. Despite being a developing country, Hadi vowed to take on the “herculean task.”

Indonesia has ramped up its commitment to reduce 29 percent of greenhouse gases from the 2010 level by 2030 under its latest Nationally Determined Contribution (NDC) submitted to the United Nations in July. With international assistance, it can slash up to 41 percent.

“Indonesia has many islands and oceans but lacks in technology. Jeju has that technology” in a diversity of sectors, ranging from the fishery industry to shipbuilding, he said.

“Huge opportunities are there.”

When asked about Indonesian workers in Korea who play a significant role in Korea’s fishery industry, the ambassador said more needs to be done to ensure they are better protected.

“Noticing the number of fishermen and needs of their better protection in terms of health, safety, remuneration is growing, Indonesia has brought the issue to the attention of Korean Ministry of Ocean and Fishery and efforts are underway to include such areas in the memorandum of understanding to enhance productive collaboration,” he said.

In tackling the issue, the ambassador stressed three keywords: serve, protect and empower.

“Indonesian government is committed (to) upgrade migrant workers’ skills,” he said. While most workers have high school degrees, the embassy is encouraging them to enroll in online courses and universities to get undergraduate degrees, he added.

“The Indonesian Embassy engaged masters and Ph.D. researchers to counsel migrants, researchers prepare free classes on practical management skills such as how to apply for a loan, how to establish their first business, encourage (them) about future plans after ending of their employment contract.”

On empowering Indonesian communities in Korea and to foster community building throughout the pandemic, the Indonesian Embassy also came up with the idea of a community farming project with the Ansan city government in Gyeonggi Province.

Under the project, the city government provided plots of land for a community farm to grow typical Indonesian vegetables. The harvest was bought by Indonesian restaurants, and the earnings go back to the Indonesian community for emergency purposes, he said.

The Indonesian Embassy is planning to have community farms in other cities in Korea. “It’s empowerment,” Hadi said.

On the education front, Hadi also discussed the country’s “EdutabMu” project that is aimed at bridging the urban and rural divide to ensure education for all in the archipelago.

The tablet, designed by South Korean-based education technology startup Enuma, provides interactive educational material for students in remote areas who do not have access to internet connection.

The program is jointly run by Enuma and Muhammadiyah, a major Islamic nonprofit organization.

Hadi went onto say that Indonesia is seeking to bring fundamental change to the country’s rural areas, adding that it is hoping to follow in Korea’s footsteps, seeing the mass improvements Korea has made over the past decades.

Despite the pandemic-hit economy, Hadi said both Indonesia and Korea were able to achieve many successful government and business-level deals.

The plant, to be built in Karawang near the capital Jakarta, would produce 10 gigawatt-hours worth of NCMA (nickel, cobalt, manganese, aluminum) lithium-ion battery cells annually, enough for 150,000 electric vehicles. Construction is expected to be completed in the first half of 2023 and the factory will begin mass-producing the battery cells in the first half of the following year, LG and Hyundai said in July.

Hadi said such a deal was “unthinkable” five years ago and only proved that Indonesia and Korea have the capacity and maturity to further engage in productive discussions necessary to strengthen their relationship.

In wrapping up the wide-ranging interview, Hadi said he was thankful for the strong bilateral ties between the two countries, adding that it is “not easy” to have a partner who shares common values such as democracy, an open market and human rights.

“People of Indonesia and Korea have such inspirations serving the interest of the people,” Hadi said.