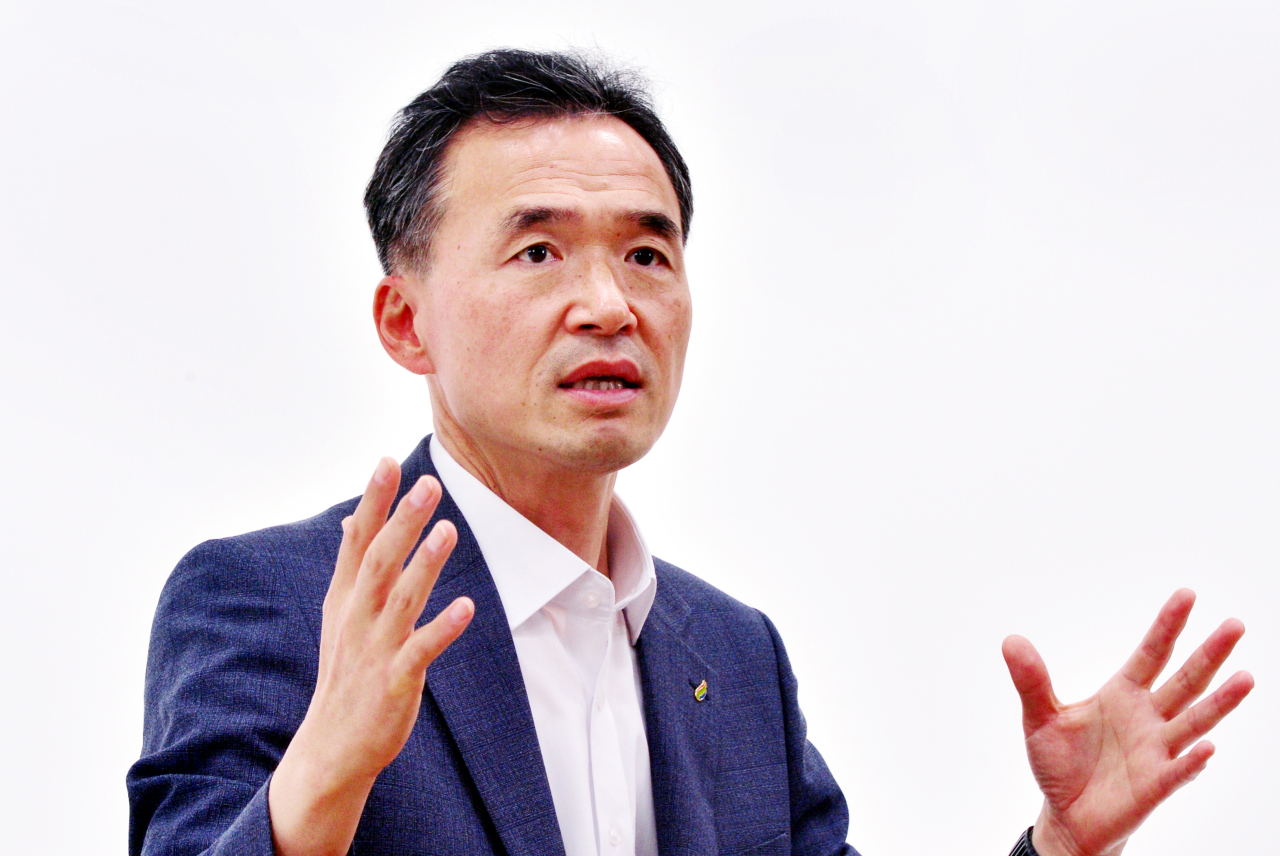 Lee Hang-jin, mayor of Yeoju, Gyeonggi Province, speaks during an interview with The Korea Herald at the Herald’s headquarters in Yongsan, central Seoul. (Park Hyun-koo/The Korea Herald)
Being mayor of a city in Gyeonggi Province with a little over 110,000 residents means putting people first, says Yeoju Mayor Lee Hang-jin, and a universal basic income for farmers is one way to do that.

“Farmers are not just providing produce; they provide a public service because communities and the country thrive on their work,” Lee said, noting that 17,000 farmers would receive a basic income in addition to an allowance from the city. Farmers will receive only the basic income starting next year.

His team had to deal with doubts and differences over the program, but many began to see a need for it as it expanded into a province-led plan, according to Lee, who added that a people-centered approach should be proactive and not reactionary.

“Last year, we rolled out the rapid COVID-19 tests for the first time in the country. About 81 percent of Yeoju residents said they were a success,” Lee said, referring to an antigen test that is slightly less accurate but faster than the industry-standard PCR test.

The city’s rather small population provided an opportunity for him to persuade health authorities to administer the rapid tests there, as tighter social distancing rules hurt the local economy, according to Lee.

Meanwhile, he underscored the importance of sustainable growth for Yeoju, in line with the country’s drive to become carbon-free by 2050. He said the government’s high-speed railway project could be a win-win deal for both his city and the country.

The project aims to link city clusters by expanding the rail network that cuts through Seoul, the capital. The country is still debating where to extend the lines and Yeoju has been sidelined, though residents there argue the economic benefits outweigh the potential cost.

“Let’s say a line extends here as far as from Seoul. That means more people on the move and fewer cars out, which translates to more spending and less carbon,” Lee said, adding that he intends to spearhead the campaign to make the message heard until he leaves office in June next year.

Lee is seeking to set up more open community spaces on the sidelines to complement his urban sustainability drive, he added.

“A better infrastructure does not complete the sustainable growth we plan to bring about. We need people to come together to enjoy city life as well. And we need them to coexist with nature,” Lee said, suggesting that expanding school zones to include community centers was one way that could happen.

People-centered does not mean people come first and nothing else matters, Lee said. It’s about people taking the initiative to look after one another while enjoying modern luxuries and learning to live with nature.