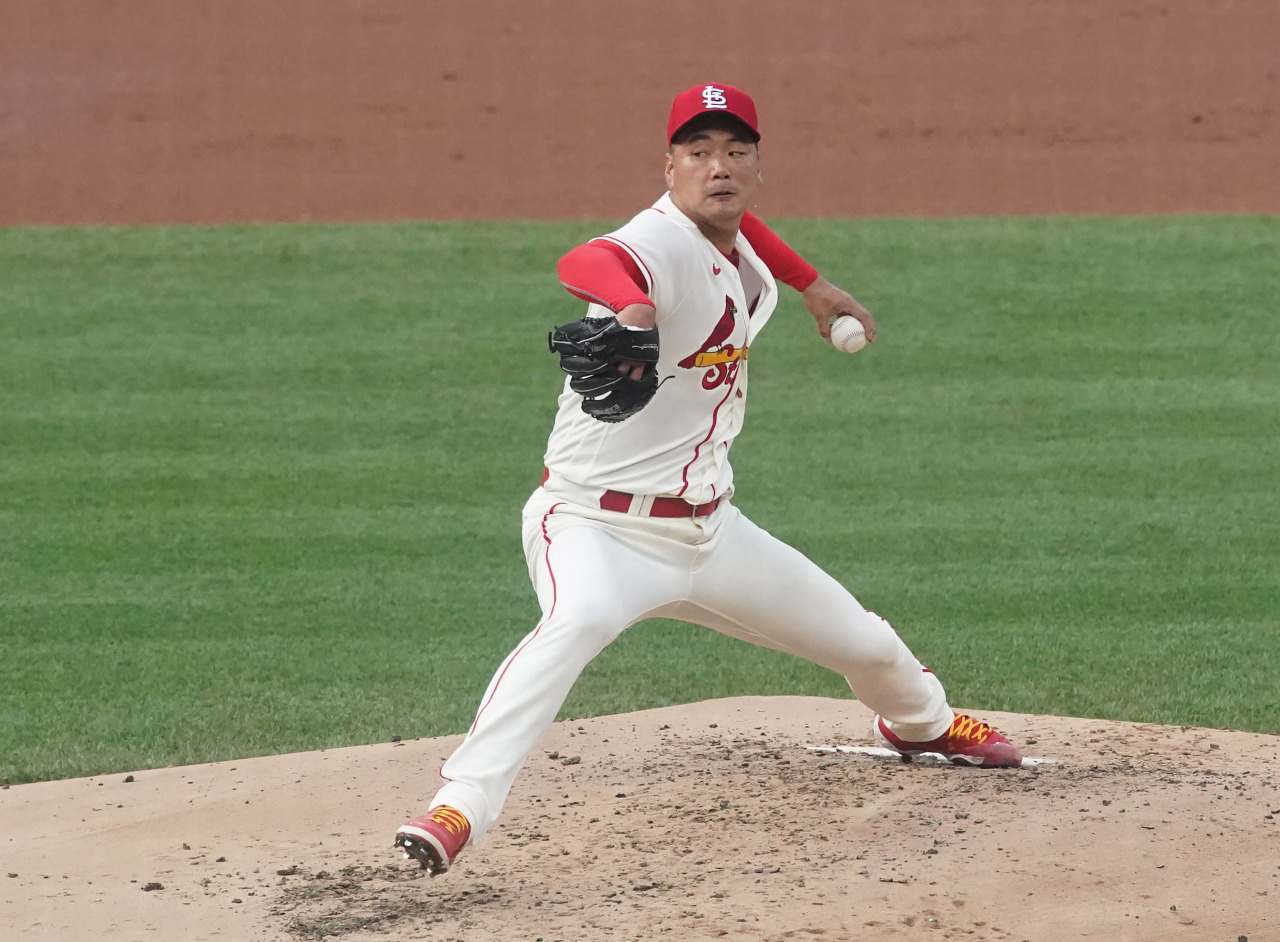 In this UPI photo, Kim Kwang-hyun of the St. Louis Cardinals pitches against the Kansas City Royals in the top of the second inning of a Major League Baseball regular season game at Busch Stadium in St. Louis on Aug. 7, 2021. (UPI)
St. Louis Cardinals' starter Kim Kwang-hyun suffered his seventh loss of the season following the shortest start of his major league career, unable to survive an early onslaught by the Milwaukee Brewers.

Kim gave up four runs on seven hits in just 1 2/3 innings against the Brewers at American Family Field in Milwaukee on Saturday (local time). Kim got the hook with the Cardinals trailing 4-0 in the second inning, and they lost by the same score.

Kim hasn't won a start since beating the Chicago Cubs on July 22. He missed some time in August with left elbow inflammation and made one relief appearance on Aug. 24 upon his return before rejoining the starting rotation.

Kim got the hook in the fifth inning for a pinch hitter in his previous start against the Pittsburgh Pirates on Aug. 29, when the score was tied at 1-1 and he had only thrown 64 pitches. Kim had been pulled early in a couple of other starts this season when he was pitching well, leading some to wonder what more Kim had to do to earn manager Mike Shildt's trust.

Kim clearly didn't help himself against the Brewers.

Luis Urias greeted Kim with a leadoff home run in the bottom first. Kim allowed two straight singles, before getting Eduardo Escobar to hit into a 4-6-3 double play. The pitcher got out of the inning by striking out Jace Peterson.

But more trouble brewed in the second inning. Cain drew a leadoff walk and scored the Brewers' second run on a combination of Rowdy Tellez's single and a throwing error by Dylan Carlson.

Luke Maile made it 3-0 Brewers with a ground-rule double to left field.

Two batters later, Urias cashed in Maile with a sharp single to left field, putting the Brewers up 4-0.

Kim's day mercifully ended after he gave up a single to Willy Adames on his season-low 43rd pitch of the day. Jake Woodford came on to strike out Christian Yelich to end the second inning.