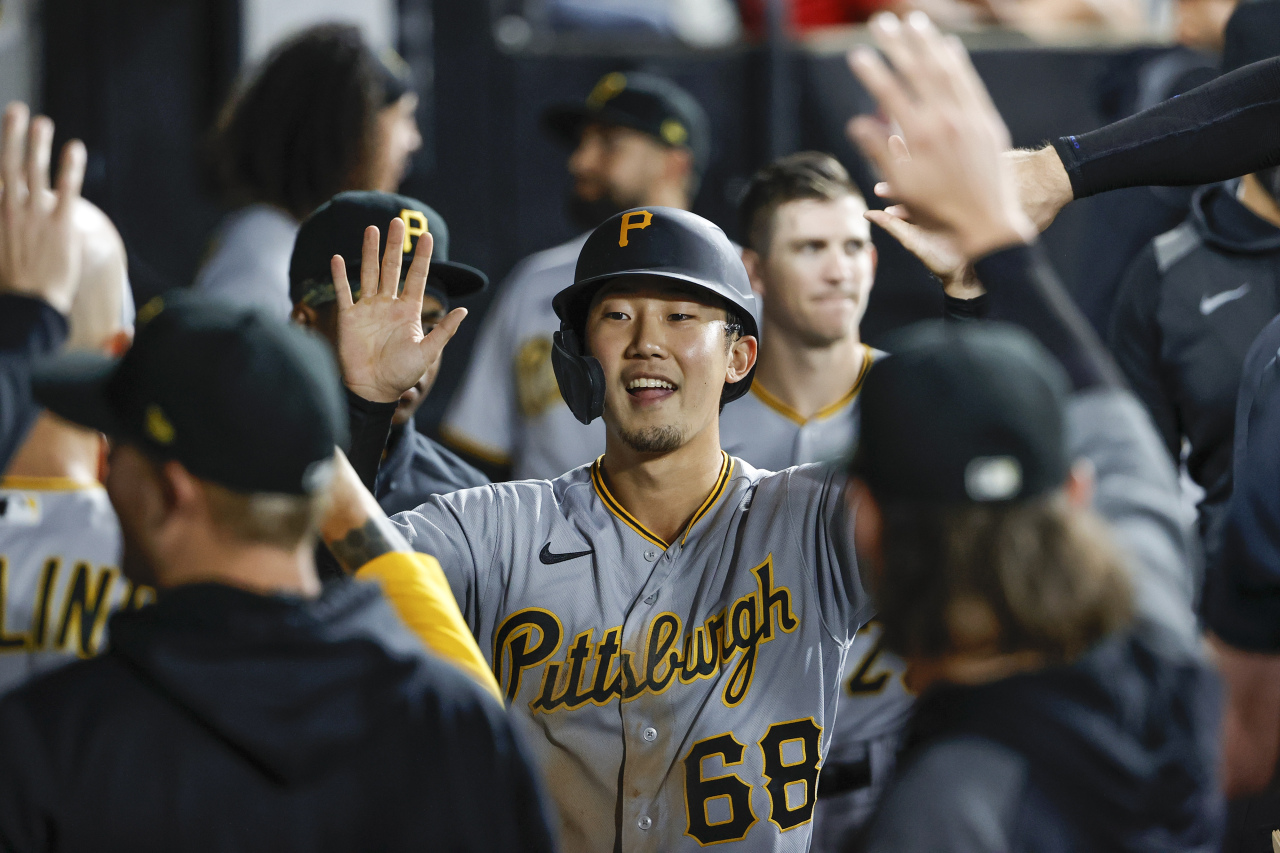 In this USA Today Sports photo via Reuters, Park Hoy-jun of the Pittsburgh Pirates is greeted by teammates in the dugout after scoring a run against the Chicago White Sox in the top of the fifth inning of a Major League Baseball regular season game at Guaranteed Rate Field in Chicago on Tuesday. (Yonhap)
One South Korean player has been called back up to the majors, while another player has been sent down to the minors after just one appearance on the big league mound.

The Pittsburgh Pirates announced Tuesday (US local time) that they have recalled infielder Park Hoy-jun from the Triple-A Indianapolis Indians.

The 25-year-old had been optioned to the minors on Aug. 23, after getting mired in a 0-for-20 slump at the plate, but the Pirates had room for an extra infielder after second baseman Michael Chavis landed on the injured list (IL) with a strained right elbow.

Park made his big league debut with the New York Yankees in July but was traded to the Pirates later that month. He received regular playing time early on and blasted his first major league home run on Aug. 10.

Immediately after the callup, Park got the start at second base and batted eighth against the Chicago White Sox in Chicago. Park went 0-for-3 with a walk and two strikeouts, and scored a run in Pittsburgh's 4-2 loss.

Park has appeared at five different positions for the Pirates: all three outfield positions plus shortstop and second base.

Over in the American League, the Texas Rangers sent left-hander Yang Hyeon-jong back to the Triple-A Round Rock Express on Tuesday.

The 33-year-old pitcher, in his first season in the United States, had been called up on Aug. 24, after several players were placed on the IL due to COVID-19. Yang had made eight appearances, including four starts, in his first major league stint through mid-June.

But Yang only made one relief appearance following his return to the bigs, pitching two scoreless innings against the Houston Astros last Saturday. For the season, Yang is 0-3 with a 5.23 ERA in nine games.