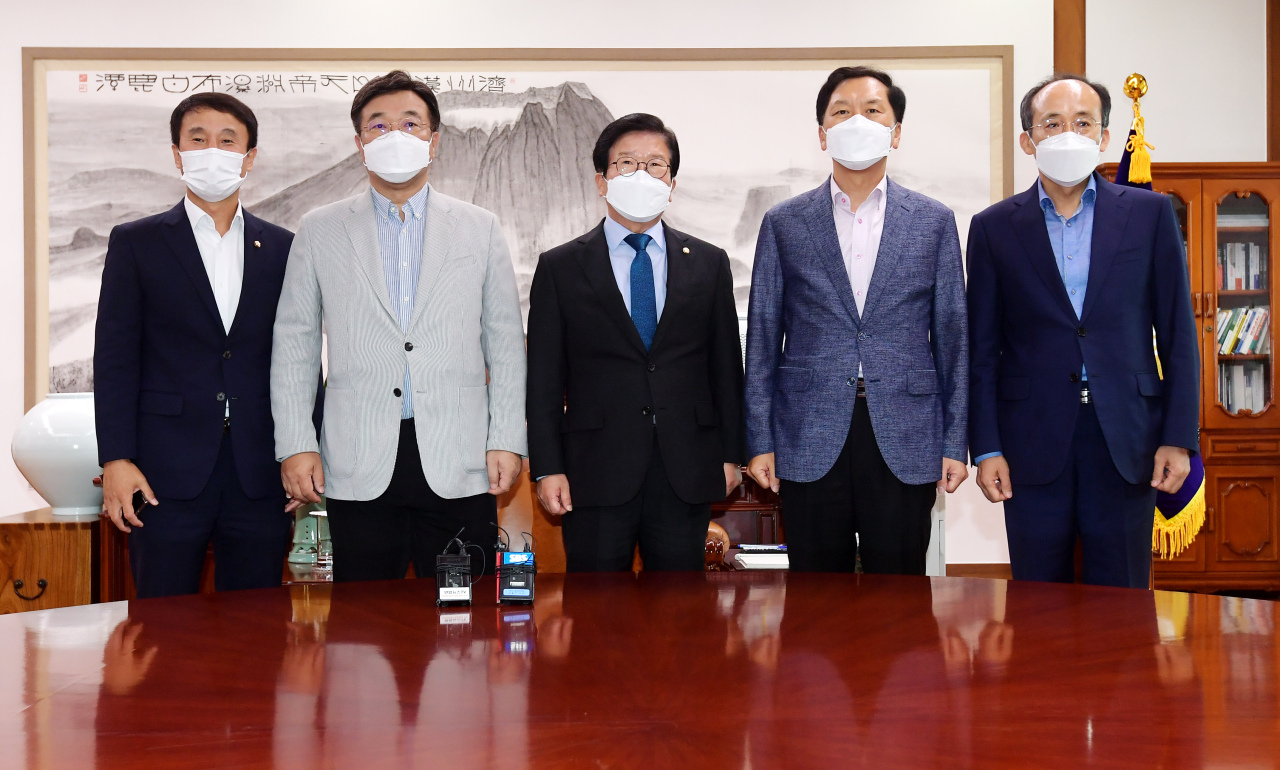 National Assembly Speaker Park Byeong-seug had arranged a meeting of the two sides on Sunday, for the second time in less than a week to help settle their differences over the bill that would impose drastically higher penalties on media organizations for “fake news.”

Opponents have slammed the amendment to the Act on Press Arbitration and Remedies, saying it suppresses press freedom as it prevents journalists from shedding light on shady dealings of the powerful, some of whom could use lawsuits to get their way. The Democratic Party has rebuffed criticism.

“This revision will offer remedies to ordinary people who have seen their reputation damaged by fake news. We will make sure they get to see that on Monday,” Han Jun-ho, spokesperson for the Democratic Party, said Sunday.

But only 3 out of 10 people who filed a complaint against media outlets in 2019 were “ordinary people”; the rest were senior government officials or interest groups, according to the Press Arbitration Commission, which handles requests for a correction or follow-up for stories brought into question.

Experts said that the report shows the ruling party is wrong to assume the bill would help ordinary people, because public figures, not ordinary citizens, have more dealings with the media. The report said 8 out of 10 complaints in 2019 involved defamation charges.

Legal experts point out that the bill could run against what the Constitution says about rights.

“Press freedom is freedom of speech every citizen enjoys. If we were to put a curb, we should be crystal clear about the condition when that’s justified. Well, the bill isn’t,” said Chang Young-soo, a professor of constitutional law at Korea University.

The bill gives courts the power to award punitive damages up to five times the amount of damage victims claim to have suffered as a result of intentional or grossly negligent stories. But the bill falls short of laying out what exactly qualifies for intentions or gross negligence, Chang said.

And it is intentions or malice that should trigger punitive damages, not gross negligence which is less culpable, Chang added, describing the bill as overreaching even if the lawmakers were to make it clearer.

“The legislation around determining intention is ambiguous and thus there comes with the risk of overregulation, which would ultimately infringe on the freedom of the press,” the International Federation of Journalists said in a press release on Aug. 20.

The public has likewise been unsympathetic to the bill. Most Koreans do not support the revision, with 61 percent opposing the change, according to the latest poll RnSearch conducted on 1,114 residents last week. Only 28 percent favored the revision.

Given the low approval, some suspect the Democratic Party is forging ahead with the bill because of an ulterior motive, saying the ruling party is seeking to rein in the country’s major newspapers, which are conservative news outlets critical of the liberal Moon Jae-in government.

The ruling party, which has said news outlets rely on misinformation to further their agendas, believes a systematic disinformation campaign had taken place to discredit Cho Kuk and his family. Cho was Moon’s justice minister who stepped down over the allegations and who is now standing trial on bribery charges.

The Democratic Party, which controls a large majority of the 300-seat National Assembly, is not expected to scrap the proposal.