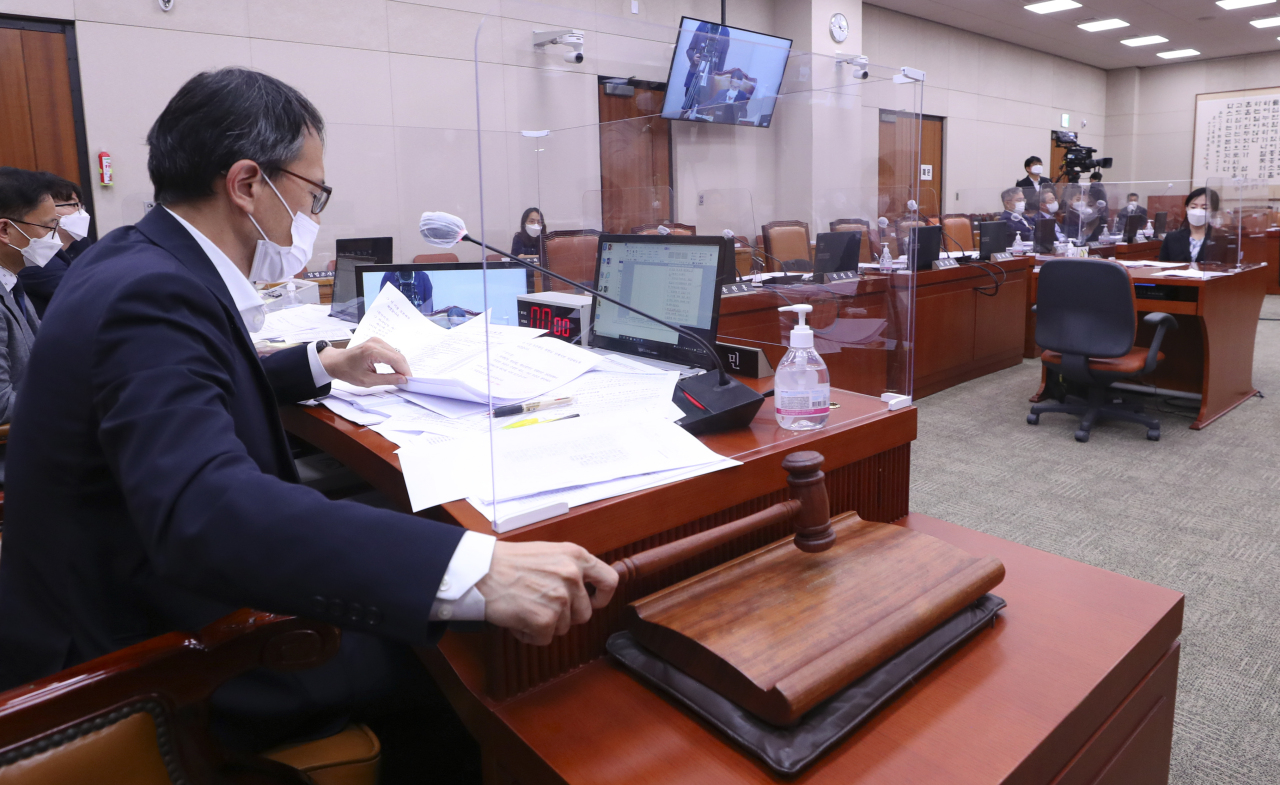 Rep. Park Ju-min of the ruling Democratic Party of Korea passes the "fake news" bill through the National Assembly`s Judiciary and Legislation Committee on early Wednesday morning as he presides over the committee as interim chairman. (Yonhap)
Criticism continues to pile up in response to the ruling party’s “fake news” bill, with critics saying it would suppress freedom of the press in South Korea.

The ruling Democratic Party of Korea has defended the proposed revision to the Act on Press Arbitration and Remedies, Etc. for Damages Caused by Press Reports as a means to protect the public from misinformation and malicious press reports.

Opposition lawmakers and local media organizations have attacked the bill from the outset, calling it a weapon to silence criticism of the ruling party and the government ahead of the next presidential election. The bill could pass as early as Monday and would officially take effect in March.

Now the stream of denunciations has gone global, with global media organizations issuing statements urging that the bill be dropped. They are concerned that Korea could lose its highly rated guarantee of freedom for journalists, which has helped the country to stay democratic and respectful of individual rights.

According to Reporters Without Borders, Korea had the highest level of press freedom among Asian countries as of this year and placed 42nd among the 180 countries surveyed.

Reporters Without Borders called on Korea’s lawmakers to drop the bill, saying it posed a threat to journalism.

“The proposed amendment could open the door to any arbitrary interpretation and possibly be instrumentalized to put pressure on the media,” said Cedric Alviani, head of the East Asia bureau of the nongovernmental organization, in a statement Tuesday.

“No matter the legitimacy of the fight against disinformation, legislators should never create new legal tools without ensuring they include sufficient guarantees, as court decisions can be very subjective on those sensitive issues.”

The International Federation of Journalists called for the withdrawal of the bill, urging lawmakers to vote no during the scheduled plenary session. The bill relies on a “fundamental misunderstanding of fake news” and would effectively “gag the press,” it argued.

“By creating undue penalties for incorrect reporting, this bill threatens to create a climate of fear among Korean journalists,” the organization said in a statement last week.

“Subjective laws are a poor form of regulation and we encourage Korean lawmakers to work with (the Journalists Association of Korea) and the coalition of media organizations to create laws that promote freedom of the press and freedom of information to benefit the people of Korea.”

The Asian American Journalists Association criticized lawmakers for bypassing proper discussions with media organizations in the process. The bill, as it is written, has an ambiguous definition of “fake news,” which could lead to abuses of interpretation and suppress freedom of the press, it argues.

“The revisions to the Press Arbitration Act put this hard-won freedom and South Korea’s international image as an exemplary press environment at risk,” the association said in a statement Wednesday.

“AAJA-Asia stands with other media organizations and strongly urges lawmakers not to pass the amendment to the Press Arbitration Act.”

The World Association of News Publishers criticized the bill for potentially being a tool for those with political and economic power to silence criticism.

“This kind of regulation, promoted by some of the world’s most authoritarian regimes, is often an expedient tool used to silence criticism of political and economic power and thus undermines press freedom,” said Vincent Peyregne, CEO of the World Association of News Publishers, in a statement last week.

“If this change were to go ahead, the South Korean government would be joining the worst authoritarian regimes tempted by reforms of the same order, which are in fact designed to curb free critical discussion.”

The ruling Democratic Party has so far dismissed such comments from overseas, labeling the critics outsiders who do not understand Korea’s unique situation.

“What do they know about our situation? They don’t know a thing,” said Rep. Song Young-gil, head of the ruling party, in a meeting with reporters Wednesday when asked to respond to the statement from Reporters Without Borders.

His aides later claimed that Song’s words were "well, they wouldn’t know (about the issue in Korea)," which could sound similar to "they don’t know a thing," in Korean.

Alviani hit back at Song’s comments in a phone interview with Yonhap News Agency, saying Reporters Without Borders was very knowledgeable about South Korea, with three correspondents in the country.

The bill is concerning, he said, as it threatens journalists with almost criminal-level penalties and lacks definition on what is fake news and what is malicious intent, leaving the judicial process solely in the hands of judges overseeing each case.

After facing criticism over his comments, Song told reporters Thursday morning that he would send Reporters Without Borders a statement conveying the official stance of his party in hopes of addressing the organization’s concerns.