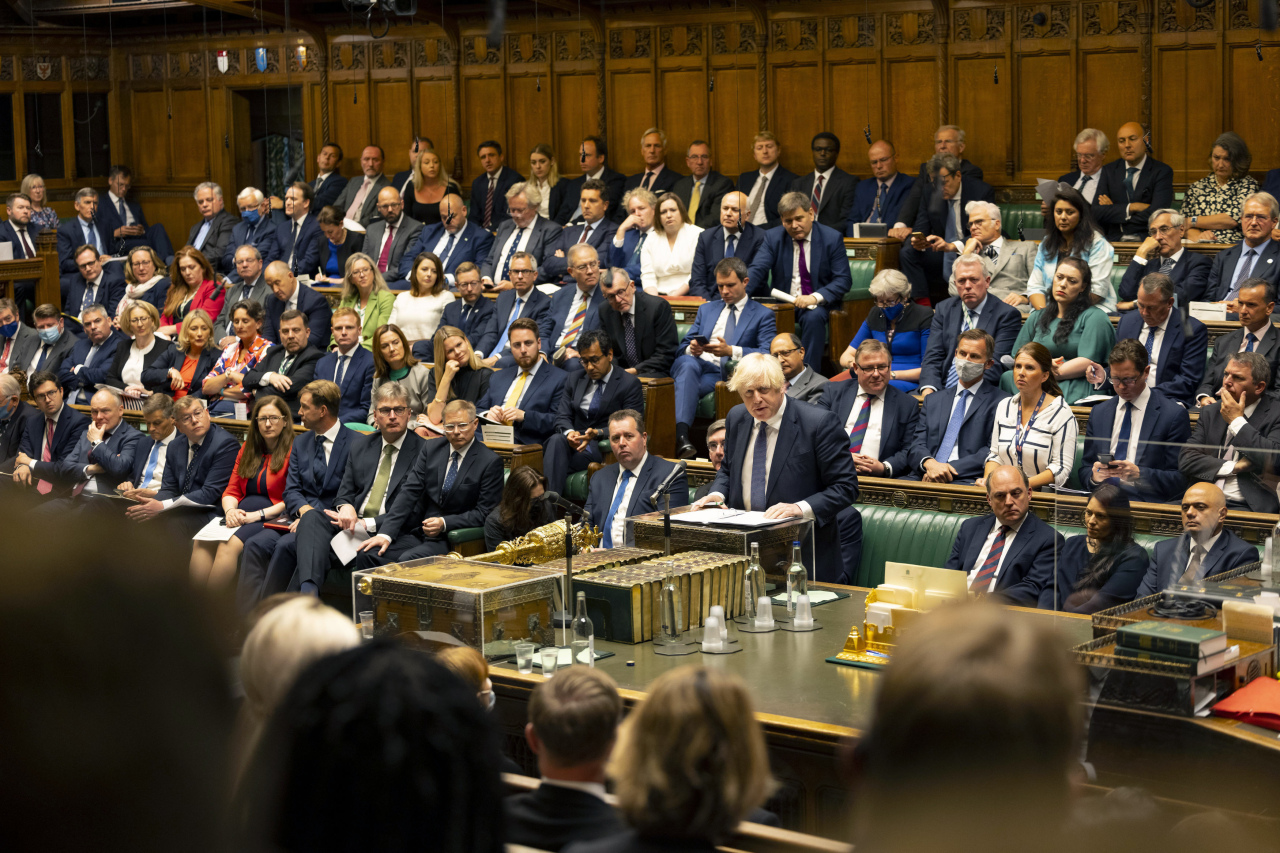 In this photo provided by the UK Parliament, Britain's Prime Minister Boris Johnson speaks during the debate on the situation in Afghanistan inside parliament in London, Aug. 18. (AP)
Britain urged the United States on Monday to extend its evacuation effort in Kabul past the Aug. 31 deadline - but conceded that if the US ignores the request, an international airlift of thousands fleeing the Taliban takeover will end within days.

The UK government said Prime Minister Boris Johnson would press President Joe Biden for an airlift extension at an emergency summit of Group of Seven leaders on Tuesday. The virtual meeting has been convened by Britain, currently the president of the rich nations' club.

British officials, however, are downplaying the chances of success. Defense Secretary Ben Wallace appeared to rule out a long US extension on Monday, but said “if their timetable extends even by a day or two, that will give us a day or two more to evacuate people.”

“Because we are really down to hours now, not weeks, and we have to make sure we exploit every minute to get people out,” he told reporters.

Biden has not ruled out extending the airlift beyond the Aug. 31 deadline he set before the Taliban's swift takeover in Afghanistan, but said Sunday that he hopes it won't be necessary.

Biden's reluctance to heed Britain _ or other allies who urged a delay to the US withdrawal _- is the latest evidence that the UK-US “special relationship” is a lopsided alliance.

About 1,000 British soldiers are stationed at Kabul's airport, alongside some 6,000 American troops, as part of efforts to manage the chaotic evacuation. Some UK military leaders have said Britain should continue the operation alongside other NATO allies once the Americans leave.

But UK Armed Forces Minister James Heappey said “there is a hard reality that there would be no international airlift without the way that the US are underpinning it.”

“The mission in Kabul this week is fundamentally underpinned by a US presence, not just in terms of the number of troops that they have at the airport assuring its security, but also the role that the US air force are playing in delivering air traffic control and all of the other airfield services,” he told Sky News.

Heappey also acknowledged that an extension would require an agreement from the Taliban, as well as the United States.

More than 150,000 British troops served in Afghanistan in the years after the US-led 2001 invasion _ the largest contingent after the United States _ and 457 died during the campaign. Senior UK military officers have expressed anger at the American pullout, saying it exposes the hollowness of the trans-Atlantic “special relationship” -- a phrase used since World War II to stress the bonds of history, language, culture and shared diplomatic interests between Britain and the US.

Biden had warm words about the alliance when he and Johnson met for the first time at a G-7 summit in England in June.

Though the two leaders struck a warm tone when they met, they have very different temperaments and outlooks. The president staunchly opposed Brexit, Britain's exit from the European Union that Johnson championed, and once called populist crowd-pleaser Johnson a “physical and emotional clone” of former President Donald Trump.

Johnson spoke to Biden by phone on Tuesday, three days after Kabul fell to the Taliban. In a bland statement after the call, Johnson's office said the two leaders “resolved to continue working closely together on this in the days and weeks ahead to allow as many people as possible to leave the country.”

Britain's lack of clout with Washington underscores the fragility of the Conservative government's goal of making post-Brexit “Global Britain” a key international player and bridge between the U.S. and Europe.

Leaders across Europe were relieved when Biden replaced Trump, an isolationist who repeatedly disparaged NATO and insulted America's allies. Biden renewed the US commitment to global climate change targets, which Trump had ripped up, and reassured allies that America was back as a reliable partner.

But he has stuck to Trump's commitment to end the two-decade US war in Afghanistan, even as the speed of the Taliban takeover this month caught Washington and its allies by surprise.

Heappey acknowledged that Britain would have liked “a more conditions-based” US withdrawal from Afghanistan. But he insisted that the special relationship remains strong.

“Of course when you disagree with your closest friend it hurts, it causes consternation on both sides of the relationship,” he said. “But absolutely nobody should think that the US and the UK have anything but the deepest and strongest of relationships.”

Kim Darroch, a former British ambassador to the United States, called the Afghan withdrawal “a foreign policy disaster” whose consequences would linger for years.

“It's going to take quite a long time for the West as a whole - because it's a Western failure, a Western disaster, not just the UK and the US - to recover from all this, to recover our reputation,” he told the BBC.