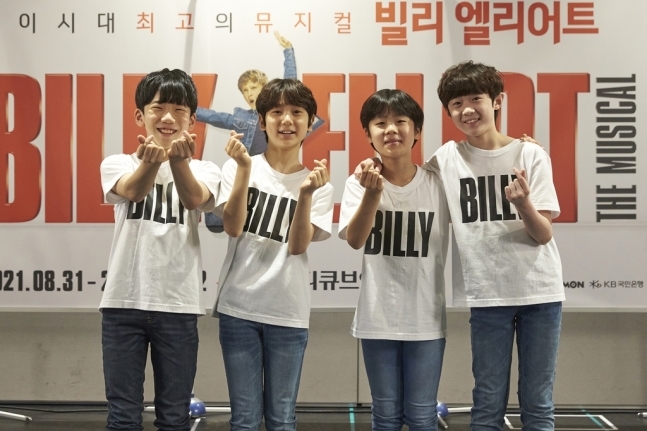 The four children actors who play Billy in musical “Billy Elliot,” from left, Lee Woo-jin, Kim Shi-hoon, Joo Hyun-joon and Jeon Kang-hyuk pose for photos during an online press event held Wednesday. (Seensee Company)
Four Billies are ready to take to the stage after a 1 1/2 years of training in ballet, tap dance, acrobatics, acting and more.

The musical, based on a hit 2000 film of the same name, is set in northern England during the 1984-85 miner’s strike. Working-class boy Billy discovers his passion and talent for ballet and pursues his dream.

Elton John composed the score and Lee Hall, who wrote the film’s screenplay, wrote the book and lyrics.

A licensed version of the musical “Billy Elliot” had its premiere in Korea in 2010, followed by a second season in 2017 that attracted a total of some 210,000 audience members during its 189 performances.

Through an 18-month audition process that began in February last year, four boys -- Kim Shi-hoon, 11, Lee Woo-jin, 12, Jeon Kang-hyuk, 12, and Joo Hyun-joon, 11 -- were chosen to play the role of Billy. To play the iconic role, they learned all kinds of dance movements, from ballet to tap dance, acrobatics and contemporary dance to jazz dance. 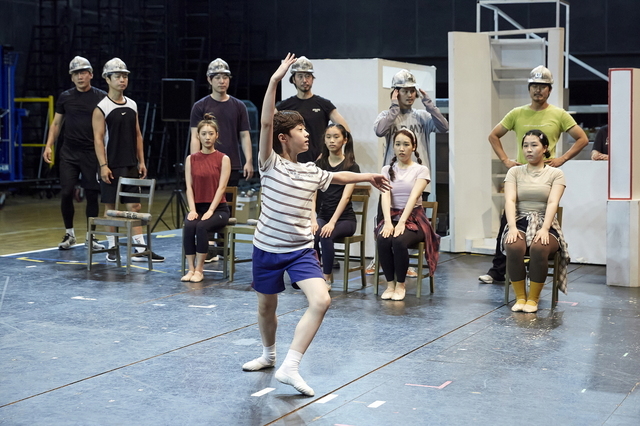 “Child actors are doing their best for a better performance. I am proud of them,” producer Park Myeong-seong, the artistic director of Seensee Company, said at an online press event Wednesday.

“Watching the rehearsal clips, I was proud of myself. But I also felt that there are also some details to be improved,” Jeon Kang-hyuk said.

“The training was not easy as I started Billy School without learning tap dancing or acrobatics. But practicing over and over again, I became better and am now confident,” Jeon said.

“I used to be scared. But now I have the confidence that I can do this,” Kim Shi-hoon said.

According to the producer, the musical is a show for every generation, featuring actors of all ages, from a 7-year-old actor to an 80-year-old actor.

“One must watch ‘Billy Elliot’ at least three times to fully take in the musical,” said veteran actor Park Jeong-ja, who plays Billy’s grandmother in the show. Park was in the 2017 season of the musical.

“This musical does not have eye-catching costumes or big name actors but it has the charm that brings everyone together. I hope it can be a show that actors and audiences can all truly enjoy,” Park said.

The musical is to run at the D-cube Arts Center in western Seoul from Aug. 31 to Feb. 2.