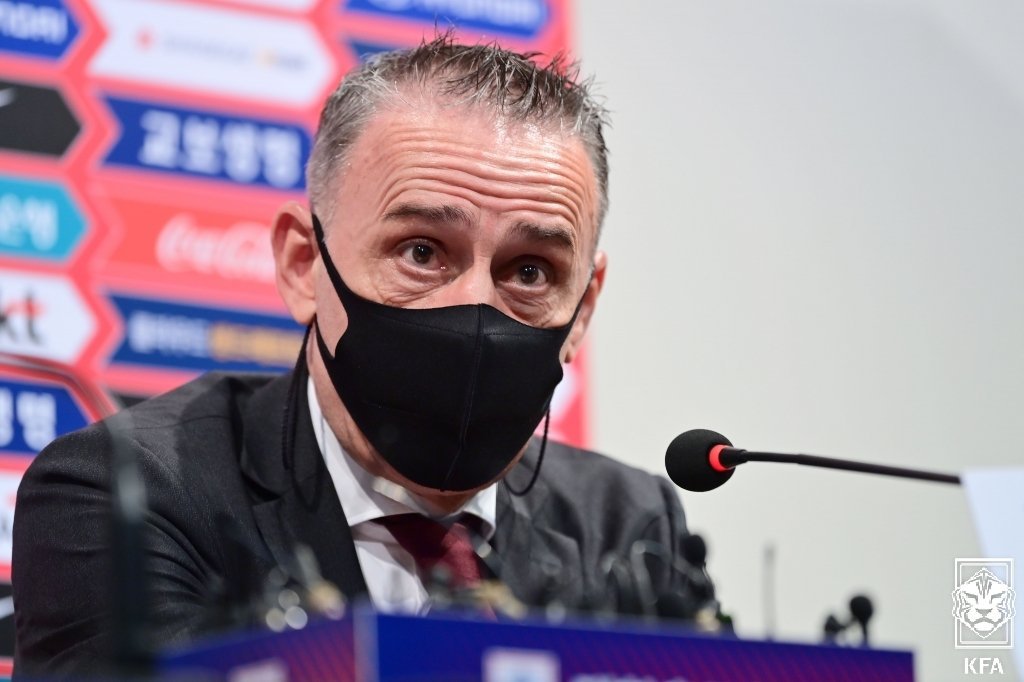 But with his team likely to get a healthy dose of those frustrating antics in the upcoming World Cup qualifying round, Bento wants to make sure his players aren't distracted by them.

South Korea will face five Middle Eastern opponents, Iran, Iraq, the United Arab Emirates (UAE), Syria and Lebanon, in Group A of the third Asian qualifying round for the 2022 FIFA World Cup.

Those opponents famously -- or infamously -- resort to clock-killing tactics when they have a lead. Players feign injuries or take their sweet time before taking spot kicks or throw-ins.

Sometimes, these things have occurred in scoreless matches.

In announcing his 26-man roster for matches against Iraq and Lebanon at home next month, Bento said Monday that his players should only worry about their own performances.

"The goal we should have is to play as well as possible," Bento said in an online news conference. "We cannot fix certain aspects of the game. The only people that can control (time-wasting gamesmanship) are the referees. Our team should focus on playing as well as possible and try to reach our goal in these two games. We cannot be concerned about those kind of things because we cannot control that."

South Korea got a sneak preview of that when they trailed Lebanon 1-0 during their second-round match in June. South Korea rallied for a 2-1 victory, but during and after the match, Bento did little to hide his anger.

Bento, however, understands that he has more to worry about than opponents embellishing injuries, when his players host Iraq at 8 p.m. on Sept. 2 in Seoul and then Lebanon at 8 p.m. on Sept. 7 in Suwon, 45 kilometers south of the capital.

Since South Korea already played and beat Lebanon twice in the previous round, Bento said he has some idea about how to approach them this time, despite the coaching change. Iraq will be a different story.

"It's difficult to know or predict what they can and can't do because they use many, many tactical systems," he said. "We should be ready and should have a good preparation to face a team that can play in different tactical systems with a very good and experienced coach."

The Sept. 7 match had been originally set to take place in Lebanon, with the return leg in South Korea in January 2022. The two countries agreed to change the order of play so that they'll avoid playing in South Korea's cold January conditions.

Bento said the switch doesn't ultimately affect the big picture for his team.

"At the end of the day, what we should think is that we're going to have five games at home and five games away, and we're going to face many, many difficulties in all of these games," he said. "For now, it's important we put our focus on the first two, try to do our best, and of course, try to win both games we're going to play in September."

Bento's 26-man roster has two forwards, 11 midfielders, 10 defenders and three goalkeepers. One of the two forwards, Cho Gue-sung of the second-division military club Gimcheon Sangmu, is the only international rookie on the team.

Cho didn't make the final cut for the under-24 Olympic team earlier in the summer but was deemed good enough for the senior squad by Bento.

"He's a player that has important features," Bento said of the 23-year-old. "He's a guy with a good technical quality, and he's strong with heading duels. Of course, it's important for us to see him in our context."

In contrast, two members of the Olympic team and recent mainstays on the senior side, midfielders Won Du-jae and Lee Kang-in, were both left off this time.

Lee, in particular, has sat out the first two matches of the new season for his Spanish club, Valencia CF. Bento said the absence of Lee and Won had nothing to do with their recent participation in the Olympics. He did pick two key figures from the Olympics in midfielder Lee Dong-gyeong and forward Hwang Ui-jo.

"The reason (for not picking the two players) is (it is) a technical and tactical decision," Bento said, without elaborating further. (Yonhap)