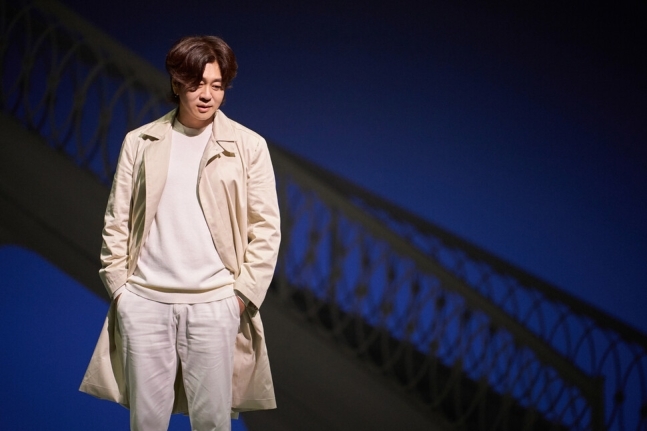 The musical, produced by CJ ENM, tells the story of middle-aged musician Myungwoo. In a coma on his deathbed, Myungwoo travels back to his past in the ‘80s and ‘90s, guided by Weolha.

Yoon plays the title role of Myungwoo along with stage actors Um Ki-joon and Kang Pil-seok.

“Myungwoo is a composer who is crazy about music. I can relate to the character as a musician. To be creative, you have to sacrifice yourself and those around you,” Yoon said during an online press interview held Wednesday. “The musical really resembles my life.”

The jukebox musical features songs written by the late composer Lee Young-hoon (1960-2008). Lee wrote numerous songs for legendary singer Lee Moon-sae such as “Red Sunset” and “Standing Under the Shade of a Roadside Tree.”

“I try to stick to the vibe of the original songs. Most of the numbers in the musical were originally sung by Lee Moon-sae. We are used to his unique singing style. I try to keep up with his rhythm onstage,” he said.

“I listened to the musical numbers so much in my school days. It is amazing that I am now singing those songs on stage in a musical in 2021,” he said

Having starred in musicals since 1995, Yoon has performed in numerous shows such as “Jesus Christ Superstar,” “Hard Rock Cafe,” “Once,” “Hedwig” and more.

“My songs and YB’s songs were to be made into a musical. But the plan was canceled. I really do wish that project could be worked on again,” he said, referring to the name of the rock band he leads.

Yoon says he too, like many others, has been hit hard by the ongoing virus crisis.

“We are all learning the importance of what we used to take for granted. Now I am realizing that I should not forget the lesson the COVID-19 has given me -- the importance of the stage,” he said. “One day, this pandemic will be over. I will have to be prepared for then.”

“Gwanghwamun Sonata” runs until Sept. 5 at the Seoul Arts Center. After the Seoul run, the musical show is slated to travel to Busan and Daegu.