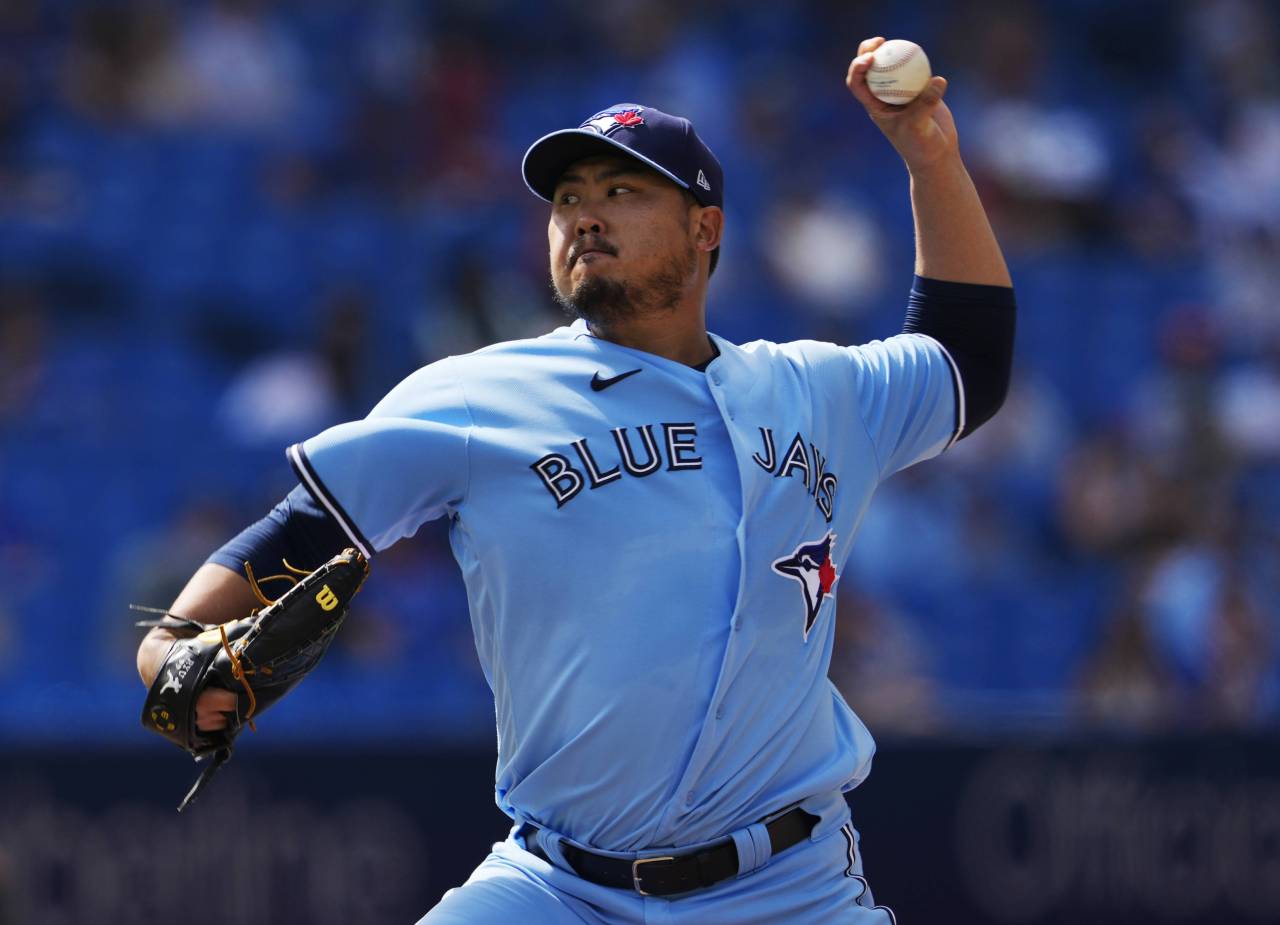 In this Getty Images photo, Ryu Hyun-jin of the Toronto Blue Jays pitches against the Detroit Tigers in the top of the first inning of a Major League Baseball regular season game at Rogers Centre in Toronto last Saturday. (Getty Images)
With his first scoreless outing in more than a month, Toronto Blue Jays starter Ryu Hyun-jin has pulled into a tie for the American League (AL) lead in victories.

Ryu tossed seven shutout innings against the Detroit Tigers at Rogers Centre in Toronto on Saturday (local time), helping the Blue Jays to a 3-0 victory. Ryu scattered five hits and struck out five, while walking one batter and inducing three double plays.

Ryu is now 12-6 for the season, and his ERA dropped from a season-high 3.72 to 3.54. Ryu is tied with Chris Bassitt of the Oakland Athletics and Gerrit Cole of the New York Yankees for most victories in the AL.

Ryu threw 105 pitches, the second-highest total of the season, to help the Jays snap their three-game losing streak.

The left-hander took a hard-luck loss in his previous start against the Seattle Mariners, when the bullpen suffered a late-inning implosion and turned a lead into a deficit.

This time, Ryu left the game with the Blue Jays up 2-0 through seven innings. The much-maligned Blue Jays bullpen, which entered this game with a 4.85 ERA over the past seven days, slammed the door shut over the final two frames.

"I had all of my pitches working really well today, especially my changeup," Ryu said. "I was able to throw it where I wanted to, and I ended up getting a lot of weak contact and strikeouts with that pitch."

Ryu gave up a leadoff single to Derek Hill in the first inning but erased him with a double play ball two batters later.The lefty got three straight groundouts in the top of the second inning. The Blue Jays spotted him a 2-0 lead in the bottom of the second, courtesy of a two-run homer by Randal Grichuk.

That was the only offensive support that Ryu had, but he didn't need any more than that.

Ryu pitched around a two-out single by Victor Reyes in the third inning. In the next inning, Robbie Grossman hit a one-out single, only to have Miguel Cabrera follow up with an inning-ending, 6-4-3 double play.

Harold Castro became the first Tiger to reach scoring position against Ryu in the fifth, when he hit a one-out double to right field. But Ryu left Castro at second base, as he got a groundout and a strikeout to end the threat.

A leadoff single by Reyes in the sixth amounted to nothing, as Ryu retired the next three batters in order.

Ryu's pitch count sat at 83 through the half-dozen frames. The Tigers made him work a bit in the seventh, though. Cabrera, sitting on 499 career home runs, drew a six-pitch walk. Jeimer Candelario grounded into a fielder's choice after a 10-pitch battle. Castro grounded into a 4-6-3 double play after swinging on Ryu's sixth pitch of the at-bat.

Tim Mayza took over to begin the eighth and worked a quick inning with 10 pitches. It set the stage for Marcus Semien's solo home run in the bottom half of that inning for some insurance, and then closer Jordan Romano kept the Tigers off the board in the ninth to preserve a 3-0 win.

This was the second game of a three-game home series against the Tigers. The Blue Jays had gone 3-6 on a recent road trip, which included two losses to the lowly Washington Nationals and then fell to the Tigers 4-1 in 10 innings Friday.

The Blue Jays needed to stop the bleeding to stay in the postseason hunt. Even after this win, though, the Blue Jays were five games back of the second AL Wild Card spot, with the Boston Red Sox and the Mariners ahead of them.

"We lost a few games of late and I am glad I helped turn things around a bit," Ryu said. "It's too early to give up (on postseason hopes). There is a lot of baseball left. We should all stay ready to keep battling."

Ryu touched 93.5 mph with his four-seam fastball and threw that pitch 38 percent of the time, compared with his season average of a 34.7 percent usage rate. His average fastball velocity for this game was 90.8 mph, 1.2 mph faster than his season average. (Yonhap)