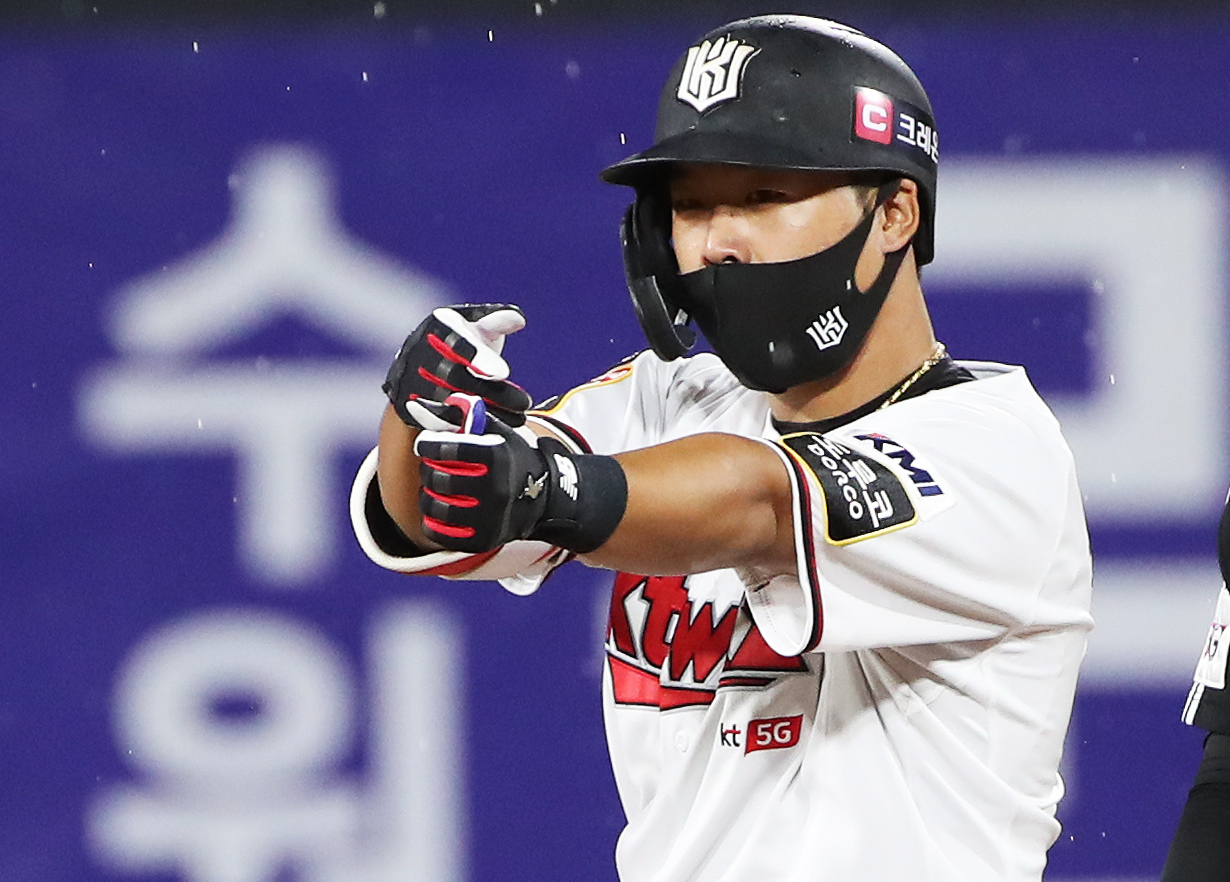 Kang Baek-ho of the KT Wiz celebrates his RBI double against the LG Twins in the bottom of the fifth inning of a Korea Baseball Organization regular season game at KT Wiz Park in Suwon, 45 kilometers south of Seoul, on Monday. (Yonhap)
This has been an unusual season in South Korean baseball in more ways than one, and the absence of former major leaguers from overseas at the top of batting stats leaderboards has been especially noticeable.

Gone are the days when foreign hitters dominated major hitting categories such as home runs, hits and RBIs in the Korea Baseball Organization (KBO).

Through Tuesday's action, Jose Pirela of the Samsung Lions has been the only foreign bat of note. In his first KBO season, Pirela is tied with Yang Eui-ji of the NC Dinos for the league lead at 21 home runs. Pirela trails Yang in the RBI department, 76-71.

Pirela does have the sole possession of the lead in the runs scored category with 67, three ahead of his teammate, Koo Ja-wook.

Kang Baek-ho of the KT Wiz is leading everyone with a .400 batting average after 82 games. Yang is a distant second at .356.

Fernandez leads the KBO in one dubious category. He has grounded into more double plays than anyone with 15.

This has been a particularly futile season for foreign batters in the KBO. Four clubs -- LG Twins, Kiwoom Heroes, Hanwha Eagles and KT Wiz -- have replaced their foreign hitters in midseason. The Twins released Roberto Ramos in the midst of his second season in Korea in June, but the three other clubs all parted ways with new faces for 2021.

The Heroes cut ties with David Freitas in June. The Eagles did the same with Ryon Healy in early July. The Wiz, who lost the 2020 regular season MVP Mel Rojas Jr. to Japan during the winter, dumped his replacement, Zoilo Almonte, in June.

Among returning players, Jamie Romak of the SSG Landers and Aaron Altherr of the NC Dinos have supplied some power numbers with 18 home runs apiece, though not up to their previous levels.

Last year, five foreign hitters blasted more than 30 home runs, including the league-leading 47 dingers by Rojas. Even Fernandez, not previously known for power, had his KBO-high 21 homers.

This season, only Pirela appears to have a shot at reaching 30 homers. And no one outside of the Venezuelan hitter is on pace to drive in over 100 runs. In 2020, four import batters surpassed the century mark in RBIs. (Yonhap)