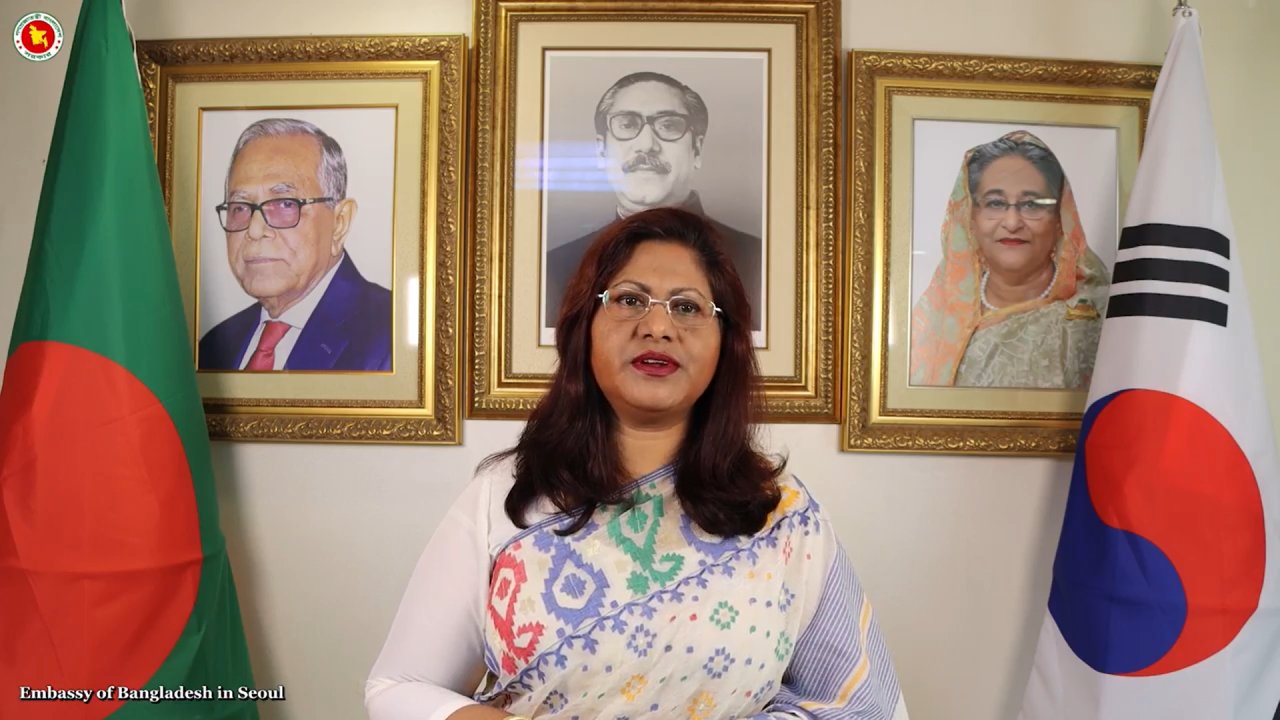 Bangladesh Ambassador to Korea Abida Islam speak at an event to commemorate Bengali poets Tagore and Nazrul Islam’s in Seoul on Saturday. (Embassy of Bangladesh in Seoul)
Celebrations were held online Saturday to mark two anniversaries in Bengali poetry -- the birth of Rabindranath Tagore and the publishing of Kazi Nazrul Islam’s revolutionary work “Bidrohi.”

This year marks the centenary of Kazi Nazrul Islam’s poem “Bidrohi” and the 160th anniversary of Tagore’s birth.

Kazi referred to composition and influence of the poem at the time.

She said subsequent to the publication of the poem “The Rebel,” Nazrul gained a reputation as a poet in Bengali society that moved and inspired young people and exploited classes and spread socio-political consciousness.

Tagore Society of Korea recited poems from Tagore’s “Gitanjali” in Korean, followed by recitals of songs on six seasons of Bengali calendar written by Tagore and Islam.

She noted Tagore was a familiar literary figure to Koreans for his poem “Lamp of the East,” whereas Islam was comparatively less known in Korea. He said this celebration would increase awareness of the two iconic writers of Bengali literature, their literary works and ideas to Korean people.

She added that Bangladesh’s first President Bangabandhu Sheikh Mujibur Rahman, who envisioned a society free of injustice and exploitation, was influenced by the ideals and philosophy of Rabindranath and Nazrul Islam.

Ranganathan said the ideas expressed in Tagore’s literary works are relevant today and would be significant in the decades ahead.

“The literary works of Kazi Nazrul Islam, a great poet, philosopher and revolutionist, inspiration for the people of both India and Bangladesh transmit message of freedom, revolution, communal harmony and social equality of the underprivileged and downtrodden,” Ranganathan emphasized.

The ambassador also said that the celebration added dimension to birth centenary of “the father of the nation” in Bangladesh, golden jubilee of the independence of Bangladesh and the fiftieth anniversary of the establishment of diplomatic relations between India and Bangladesh this year.

Kim underlined the need of cultural exchanges to promote the literary works and ideas of Tagore and Islam.

The cultural presentation on music and poems written by Rabindranath Tagore and Kazi Nazrul Islam can be accessed on the official Facebook page of the Bangladesh Embassy.