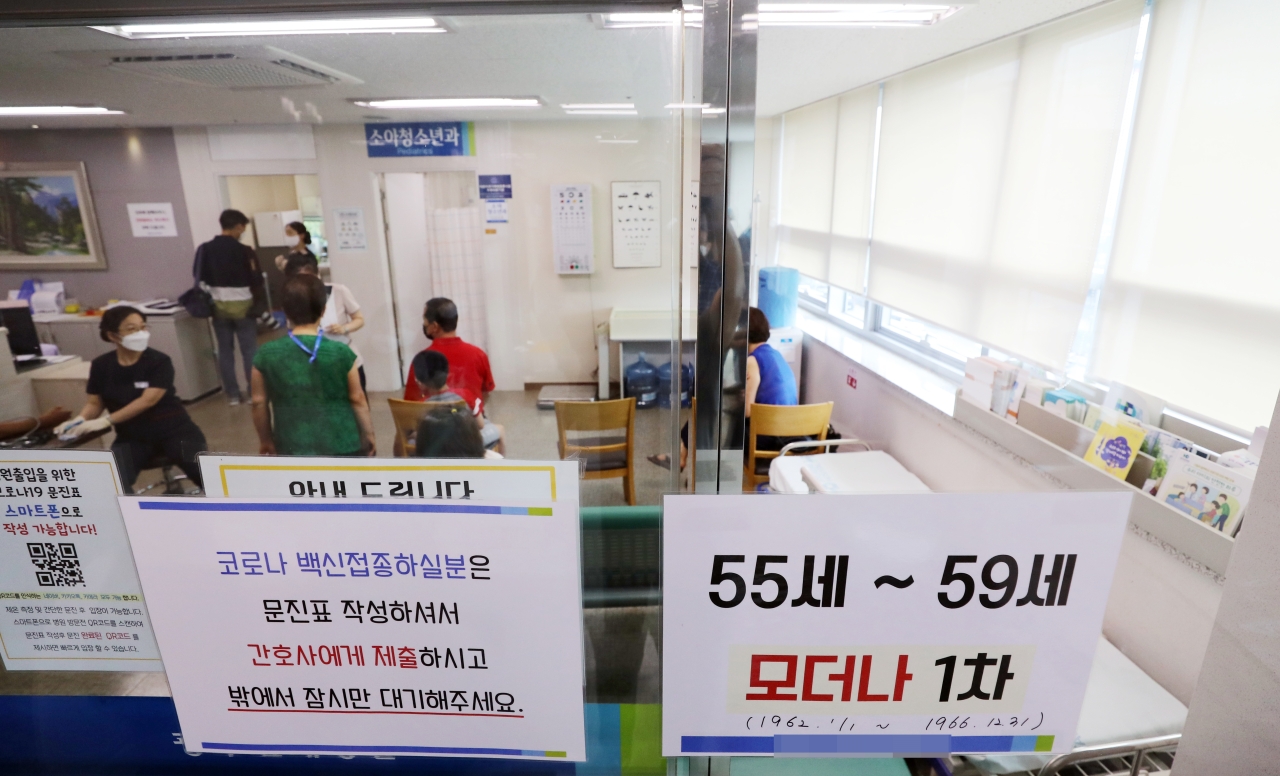 Photo shows a clinic in northern Gwangju, where first doses of Moderna’s COVID-19 vaccine are being offered to 55- to 59-year-olds. People in this age cohort became eligible for their first COVID-19 shots on Monday. (Yonhap)

Patients at Korea’s COVID-19 hospitals are getting younger and a growing share of them are ending up in intensive care amid a sluggish vaccine campaign. Currently, the age restrictions for vaccination bar anyone under 55 from getting a shot.

By Saturday’s end, slightly over 61 percent of 324 patients currently ailing with critical COVID-19 -- meaning they are on life support or artificial respiration -- nationwide were aged 59 and below. The count of severely or critically sick patients seen over the weekend is the highest since the last stretch of the winter surge in January.

Two patients in their 20s died in the space of a week, bringing the cumulative death toll in the age group to five.

“Plus, there is an added threat from the delta variant of COVID-19, which appears to be associated with higher likelihood of severe outcomes,” he said.

He said medics on the front lines were “worried that this time, more patients seem to be falling seriously sick, many of them younger and not yet eligible for vaccintion by age or profession.” “Young people not having access to vaccinations is a chief factor, unfortunately.”

Korea’s vaccination campaign, which rolls out in the descending order of age, opened up to people in their mid- to late-50s this week. For people in their 40s and younger, their turn for first-round vaccinations doesn’t come until Aug. 26.

Delta may be as transmissible as chickenpox and more likely to cause severe illness than previously circulating strains, according to an internal US Centers for Disease Control and Prevention slideshow. Still, the agency said the risks of getting severely sick or dying were reduced tenfold or even greater in people who are vaccinated.

With delta around, receiving the complete regimen of two doses of a vaccine is much more crucial. Public Health England reported that a single dose of either AstraZeneca or Pfizer’s vaccine was only about 33 percent effective against symptomatic disease from delta. The second dose of AstraZeneca’s vaccine raised the protection to 67 percent. For two doses of Pfizer, it was 88 percent.

So far in Korea, people who are protected by a full vaccination remain just 13 percent of the 51 million population. Close to 38 percent received at least one dose of a vaccine, with the seven-day average of new doses administered standing at 232,049.

Ahead of the weekend, Jeong Eun-kyeong, the Korea Disease Control and Prevention Agency’s commissioner, told a briefing that “controlling the spread is made harder by the characteristics of the delta variant,” acknowledging for the first time the new variant’s role in the latest wave of cases.

“Delta is responsible for the renewed surges across the globe, Korea included,” Jeong said. The agency’s weekly analysis posted Tuesday found that delta was showing up in nearly half of patient samples that were sequenced.

Infectious disease professor Dr. Kim Woo-joo of Korea University said, “Thankfully, we are not without defense against delta, and that is vaccination.”

“But seeing that Korea’s vaccine drive is complicated by short supplies and delays in deliveries, social distancing of higher intensity needs to remain in place to prevent our medical systems from collapsing,” he said. The signs of a collapse were already becoming apparent, he added.

In Seoul, a patient in his 40s with COVID-19-like symptoms died Tuesday as first responders took him from hospital to hospital around the city to find an available bed. He tested positive for COVID-19 in a postmortem testing.

A senior official at the Korean Hospital Association said general hospitals in and around the capital city have been ordered to empty at least 10 percent of their intensive care beds to make room for COVID-19 patients. “In other words, some patients with life-threatening ailments or injuries other than COVID-19 are being evicted,” he said.

As beds run out, the Ministry of Health and Welfare is incentivizing hospitals to discharge patients faster. In an announcement Thursday, the ministry said hospitals will be paid the costs of one bed-day for each patient released starting this month through October.

Korea conducted 85,291 tests to find 1,442 more cases of COVID-19 on Saturday, according to the official statistics. Over the last seven days, the number of new cases being reported a day has averaged 1,563.